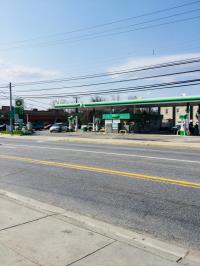 The staff was super friendly, it just took a little time to figure out.

Poor customer service, Uhaul don't comply with what it's advertised.

There was a slight issue with picking up my truck upon arrival, but Matthew took care of it right away. He's great.

Owner Mike Ajayi was very personable and helpful beyond just the U-Haul service but helpful in advising me about the community I just moved into.

We had all of the information to give to the gas-station attendant. We had no idea he was also the agent for the rental truck. He was O K. ,,gave me a hard time about something that was not on his phone. He did not even have a computer for the transaction. Modern technology is amazing. It took forever for us to be cleared to take the truck. We did the covid-19 wipe down ourselves. A good day.

My pick up location was changed four times, the pick up location was closed and Instead of starting our move at 8:00a.m. it was lunchtime when the lowest ranking guy showed up to open the gas station that was representing uhaul. He was polite but he is not trained and was really just a fall guy for poor management. I recieved 7 of the 12 blankets I ordered. They were sitting in a pile on the bathroom floor of the gas station, tape and dirt still on them from the last customer. The truck was not clean and had garbage still in the back, spilled coffee in the front, and reeked of cigarettes. Each call to the help station required being on hold for 10-15 minutes and i had to call four times. I asked a manager to call, it's been five days without uhaul contacting me.

Quick pick up and drop off for a last minute purchase. All went very well!!

I would not recommend that location to any of my friends and I will not use them again. The rep seem like he did not know how to rent a U-Haul truck and had to keep calling his boss. It took about 40 minutes to rent a U-Haul van and I was the only person in the store at the time. Also, when I received my rental charges they charged me for furniture pads an utility dolly that I did not request or received. I want the charges removed ASAP. Thank you, Cory (m) 240-712-1678

As a business owner I don't hide fees they fuel amount was correct on my return, I was charged over $250 for a 1 day rental I could have rented from Enterprise Commercial Trucks and saved over half of this your rental starts out at $29.99 a day and totals more then a weekly rental @ Enterprise

Reserved a car hauler via another location, but they didn't have one and referred us here. Was told it would be $118, but turned out to be $158 with fees and taxes. Then the vehicle we wanted to use didn't have a big enough hitch, so the cashier said he'd give us a deal on renting the hauler and a truck - only $39.95 plus mileage for the truck and he'd discount the hauler since we were stuck. Signed the new contract for $95. Got home and my bank account was debited for $158 plus the $95! Reread the second contract and saw he only charged me for the truck at a rate of $103. Called this morning and the clerk who answered said I'd have to talk with the manager who wasn't there but he gave me his cell phone number. Tried to call the manager this afternoon and no answer and the voice-mail was full. Tried calling the location later this afternoon and no answer at all. For what I paid, gas included, I could have hired a tow truck and it would have been cheaper and less time-consuming. I've rented haulers from Uhaul 3 times before (not from this place) to pull with my own vehicle (not an option this time) and never felt cheated or taken advantage of - but I'll have to think twice next time I need to move a car.

If you are going to have a service at a location make sure everyone knows how to rent the uhaul...horribly unorganized ...extremely unprofessional...very shady ..If I wasn't so desperate in need for the truck I would have carried the stuff by hand the 4 miles it had to go.

BP gas station was adequate for dropping off.

This location is completely clean. The owner is such a joy to do business with. Renting this uhaul trailer was effortless because of the excellent service we received.

truck share using mobile device should be in/out. no wasted interaction(s) with personal for the key

BP gas station had a car trailer hitch side poking into the driving way path.

The service was horrible. It took over 30 minutes to get the keys when I had a reservation and nobody else was there. If I hadn't called the main u-haul office I possibly never would have been able to get the truck.

They did not have record of my reservation. The problem is I was going to pick up storage at the actual U-haul store and could have picked up a truck right there saving me the hassle of going to another site. I do not fault the dealer but instead U-haul representative caused the problem.

Ibrahim is a really good guy and does a nice job with his shop.

Perhaps signs marking the parking lot where the trucks should be parked would be helpful.

The owner wasn't there. We had to wait with our young child for nearly an hour in a not so good part of town for him to show up. Once he did show up it took another 30-45 minutes to get the truck from them. This wasn't even the original location we requested. So they tacked on extra mileage charge because we had to drive further back to our home. It wasn't a lot but that's not the point. Any way I would never rent from this place again!

Rep was very nice, helpful and took the time to be sure I was comfortable with the truck. Highly Recommended location!!!