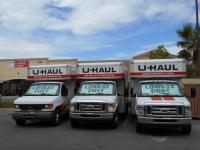 The truck 150,too mile on it. The right side mirror would move in the wind.

Rep was very professional and explained use of the auto transport throughly! Thank you for all your help to make our move seamless.

Great manager. Brent was very helpful in all ways. I highly recommend this location.

The gentlemen that helped me. I forgot his name. He was there Tuesday morning when the location opened. He went above and beyond to assist me rent the u-haul. I was already stressed from moving. He helped me relax and get me on the road. Thanks a lot!

Location is sketchy with people hanging out in storage units after hours. Apparently our trailer wasn't maintained well because the tire lost at least 1/5 of the tread during our trip and we had to have a replacement put on. Thankfully the gentleman from Grace Enterprises who fixed it was great!

It was a great experience. The manager made sure everything was right even though the place was busy.

I believe the guy that helped me was Brent and he was super helpful. He even stayed late to make sure I got the truck and everything I needed.

Very friendly and efficient location. Glad it is close to my house. Very convenient.

get rid of the manager...he tricked me into thinking that the truck i got was the same price as the one i had initially wanted. and didnt ask me if i wanted the optional ins coverage.

I made a mistake and I own it, but, if you're asking me about my experience, here it is- I left three keys to a lock that I was using tuned on a storage unit I haven't gotten called back and I was not able to get in contact with this location in order to get the keys back and I was not informed to take down the keys. If you haven't found the keys in obviously unit cleaning and looking at your truck very long IF you have found the keys and did NOT decide to contact the pERSON was previously in it and that's not a good thing . I spent $200+ To get the lock cut in new locks put in to the storage unit that I had to get into. I own this, it was my mistake by leaving the keys but it would've been helpful if I had been informed of been able to contact your place to get the keys back. One great thing, - The informal person in the window letting me know what to do and where to go that was helpful that was a good thing . Everything else about getting there sucked it was really a pain in the ass it was hard to do it was very laborious having to be verified in such a manner was a real pain in the ass and I would never do it again it should've been streamlined fast and efficient that's the whole point of this process missed on every level K Keith

I tried to reserve a rental 4 times and everytime I did the site called me and said we don't have it. I finally got the go ahead to Towne Storage and when I got there the truck wasn't available. The owner was kind enough to let me know he would call me if one becomes available. He called me an hour later to let me know another truck was free which I greatly appreciated. But as for Uhaul, if you have someone make a reservation please make sure the truck is available. 4 different times and 4 different places. I think that is unacceptable in my opinion but maybe that's how it works.

Complaint is not for the rep. The rep was great at the desk, my complaint is with the company. Was trying to pick up the last of piece of furniture from ikea, which was there at the time of reservation. But, due to system having issues, by the time I got back to pick up, the item was gone, and still ended up having to pay 36 dollars for nothing.

We weren't told about the extra charges. Over the phone they said it was $29.99 and they charged me above $90!! Also we were supposed to get an online reservation but when my dad came to pick it up. â€œBrentâ€ insulted my dad saying he's not good with technology, and only the younger people would understand. In light of the BLM protests you have a racist associate!

This place is great I've been going to them for years & they always have everything I need from boxes to rent 100 blankets at a time and this time was no different. On this occasion I needed a 17 foot moving truck at the very last minute and pop by and my luck they had one for, I was in and out in less than 10 minutes.

Brad was very professional and nice.

I do not write negative comments, as I work in a customer based industry and it can be subjective. However, when the service is so poor then it comes into questions, is it necessary to inform upper management in order to make the necessary changes to prevent this from happening to future customers and prevent decreased revenue. My experience was enough to make it where I rather spend additional funds to have better service than find myself in the same situation as I did today