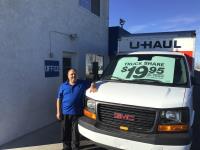 Don't change a drop off location through a voicemail just because you need a truck at a certain location. Having to take a truck back across town was a huge inconvenience.

My pick up time was 7:00 am the Your online steps didn't work we called and called they couldn't help by the time we got the truck was late I had to wait till it Open

Unlike the characters at U-Haul Moving and Storage of East Lancaster, the guys at AAA Stor Stuff were total professionals and dealt with us quickly and professionally. Meanwhile, the U-Haul Moving and Storage of East Lancaster failed to have the 20' truck we'd reserved online - they said they lost it! They wasted our time and didn't even apologize for screwing up our reservation. The East Lancaster U-Haul folks were totally lacking in customer service skills and the manager wouldn't even put his phone call on hold to speak to us or make any attempt to mitigate the fiasco he and his store put us through.

The guy at the front desk was so helpful and friendly

Fix the return by phone process

Victor and Staff were very friendly and helpful.

first off i had to keep the truck for more than what i expect my help didn't come thru I THE 1-800 # to let them know what was going on she told me that was not a problem she could extent the the time then a get a call from Victor asking me when i my going to bring the truck back i told him i already called in and extent more time he told me why i didnt call him i told him the office was close he told me he is the one who rented me out the truck not the 1 800 I told him i thought you were all connected and they will relay the message to that office,

I wanted the truck delivered closer to home not 30 mins away. I wanted the quartz hill location... you decided to have my truck send to a different location why??

Would much rather go to a dedicated UHaul dealer. This is simply a starage yard.

The staff is what makes this above average. They are the best Uhaul bldg are uhaul bldg. Its people !!

To remind the customer as to how wide the truck turns. Otherwise great experiance.

Uhaul was 4 hours late I was told I'd be compensated for the poor service and I was actually over charged.

I rent from aaa often, this time attendant said he ck mileage and gas, i took his word, but some one had taken gas out of it. I had to put 50$ in gas for traveling

Victor was most accommodating. Great service.

Explaining the mileage and gages on the contract. Make the gas gage on the contract look like the one on the truck. I was overcharged 15.00 in gas due to different interpretations of how the gas gage reads. Make it clear because to me it felt like a scam and bad business practices which lowered my trust to use U-Haul in the future.

Be more kind, warm and courteous.

Drop box for keys. I had to find another location to drop off my uhaul truck due to this issue. The corporate office on Sierra hey was awesome. They accepted our truck with no issues.

I'm impressed with the overall experience. The website is well configured to set the tone. Each location contacted me so I had the opportunity to clear any uncertainties which I didn't need but it was a nice touch to hear the voicemails. And the two was friendly and put effort to customer service. Overall well done uhaul and staff.

THE STAFF AT THIS LOCATION AND THE OTHER NEEDS TO BE BETTER TRAINED. I had my girlfriend pickup a trailer as she was moving to NH to be with me and expected her to receive great service I have gotten in the past. She said the trailer seemed unsafe and was not staying tight. So I told her to take it back for a look. This place inspected it. She said it was still not tight. So I told her to take it to another location I liked on SIerra Hwy. They also said the trailer was fine. I assumed it may have been her not knowing what was okay even after she sent me a picture. SO I had her tape the nut just to be sure even though two locations said it was okay. She departed CA and met her in Amarillo, TX. Once I saw the trailer I immediately saw what was wrong. Luckily I also knew the fix would hold once I reinforced it. She was sent out with the trailer in a very unsafe condition and if not for me being a tad paranoid and wanting her to breathe easy; her drive could have ended very badly. She told me that the location of pickup also did not do a walk around with her once I met her in TX. I was expecting this to always be part of the process. I feel the AAA Store Stuff location in CA should not be allowed or licensed to let anyone rent trailers if they are going to be giving them out in unsafe and damaged condition such as the once my girlfriend was given. I have a photo to show the unsafe condition of the trailer a normal drive would have been forced to face. I had called UHaul and was under the impression I was going to be hearing from the local NH representative Anthony Windham in regards to this matter.

Managers Victor and Gerald are simply the best. Courteous and Professional.