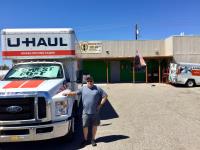 Rear door handle was stuck and wedged to the point that door could not be pulled closed. Had to drive to Moe's Uhaul with rear door open. Suggest preventative maintenance to he done.

Everything went precisely as planned.

This vehicle was filthy!!!!! We wiped the inside down with Lysol and had to clean the windshield. The oil change service light was on when we piked it up. If this is your standard practice, I wil NEVER rent U-Haul again!!!!!

The truck was filthy inside and out. The cab had dog/cat hair all over the seats. Also, there were sticky spills all over the cup holders and floor. It obviously was not cleaned or disinfected! I said something to the employee and he offered to blow the cab out. I declined as we had to get moving. When my husband tried to close the back end of the truck he had to stand on the bar/handle with all his weight to close it. We asked the employee if they had a different truck and we were told no, and the one we had was just fixed, and it would loosen up. Well it didn't and it got worse. The back actually opened up on our route to our destination. I have video of three grown men trying to get the door down and latched! You need to fix theses problems and not rent out faulty equipment with mechanical problems and clean out your trucks.

Make sure the windows are clean, the outside of the truck was full of bugs and very dirty, there was no sign of the truck being sanitized before I got it, there was a tag on the window stating the truck had WiFi and it didn't, and the interior smelled bad

You can make sure the reservation confirmation sends an online customer to the correct location for the equipment pickup. That cost us a serious delay in getting back to Los Angeles.

Your Redlands location is terrible. I've used it several times lately and have stood in line for 30 to 45 minutes. I brought this up to several people at this location and was told that the manager doesn't want to give them more help. The place is starting to get dirty and unorganized. The management at this location is not paying attention and it shows badly. The workers also have bag attitudes and I think it's because of lack of help. They seem like good people. Never see the same people twice. That tells me that there must be a big turn over rate. Poor management. You need to follow your mission statement

The location for the rental was changed and then it did not appear on my app. I could not pick up the truck when I needed to and had to wait until the location opened. Thank God they were opened on a Sunday.

Moes Uhaul was horrible and had no knowledge of anything about the equipment. He sent us out to drive 1000 miles his words "good luck" the truck unside cab was very dirty. The trailer tires and fender all blew out and off which created a 12 + hr in Grand Junction.

The windows were very dirty had to clean inside and out a few time very filmy.

Truck had trash in the cab. Normally the teucks are clean and that's why I use this location.

This location was supposedly open, but they weren't. The drop off through the app was super easy though.

This is not a reflection on the location. I reserved a truck and car hauler at the queen creek az location I received a call stating they were at another location 25 miles away I received a call stating they did not have a car hauler I called uhaul main # and was told it was at the second location Arrived to pick up truck/trailer and was told no trailer Waited 40 min to be told the trailer was an hour away Had to completely re-arrange my 250 mile move the day of at a large expense to my family. I now have no way to transport my vehicle to my new home. Uhaul made no effort to help me with the situation uhaul caused. Since uhaul seems to have little regard for their customers I will have to absorb the inconvenience and expense of their poor service.

The one thing I experienced is consistency...all bad... Reserved 15' truck for 8am 3!â€ Weeks in advance, day before I'm told I need to drive an hour away to pick up a 20' truck at 10am, booked your moving help for 8am, Had to argue with Roxanne in dispatch after being on hold for 20 minutes, she could care lesd

Have the right truck ready and don't make it such a hassle to pick it up.

This rental trailer was not inspected for road worthiness Prior to being rented, and it gave me nothing but problems going across the country from the beginning of my move. Tire treads were low( which I ended up with a flat), bolts were missing from the body of the trailer and could see daylight from the inside, and the roof of the trailer leaked when I went through a rain storm.

I cant think of a thing. Moe is the greatest. #1 best experience renting a uhaul ever. .He will definitely get all my business and referrals.

No one was at the ste to check in the trailer. I had to use the app, which is the worst app I have seen in a long time. After multiple attempts I was able to complete the check in. I even called the u-haul number and their explanation of how to use the app was incorrect.

No priblems dropping off the trailer.

Great experience the gentleman was very friendly. He made me feel like I was borrowing a truck from a friend.

The ac was not working. Not blowing cold air.