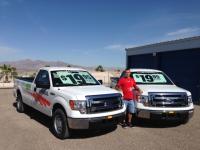 The two guys running the facility were extremely rude.

I've used U-Haul many times and had great experiences all over the country, but Wilson's self storage in Lake Havasu was the worst experience of my time e doing business with U-Haul and made me want to buy my own trailer. The service was the worst part, they are very rude to their customers and not good people to do business with. Other than that it's literally a trailer that's not very organized and I'd never recommend someone there.

All over all was a pleasant experience excellent customer service

Easy to work with. Everything was as ordered and the staff was friendly and helpful.

Arrived at location and no one was there. I ended up taking the trailer anyway because I needed it. The trailer was dropped off the same day. I get a phone call Monday telling me I didn't follow protocol that I shouldn't of took it. It's considered stolen st this point. Well you online process is very deceiving it says your online check in complete to me that's a green light to take it. You guys should really highlight something saying don't take yet wait for a representative. But he went home early so guess who suffers? The customer. I won't be back to U-Haul unless I have too it's no longer first choice.

Absolute who we use again.

Honor your reservation process!! Or establish one! Also, your website./online system does NOT work!

Straightforward guy. Does a good job.

U-Haul always makes it so quick and easy to rent from!

Apparently no longer called "Wilsons", perhaps "McCheapers" instead, and was not open on Sunday despite U-Haul site saying they were.

Hmmmm, I went to drop off the car hauler as previously agreed...but the attendant was all kinds of rude and insulting!! He told me that I was 2 days late, and that if I would have read my contract I would know. I was "red-barred" in his system (whatever that means). He said he wasn't worried because it happens all the time. He even went on to say that I could have returned after hours...I told him the app only discussed trucks with keys and not TRAILERS. I was concerned about dropping off a trailer on their open lot with out it being secured. This is LHC and everyone has trailer hitches...what would stop anyone from driving off with the trailer. How could I prove I returned the trailer?????? So, I waited until the lot was attended. I told him about my conversation when I rented and he scolded me for not READING my contract. Great, I own that for all future rentals but on this day he as condesending and insulting. He further told me that I should be lucky I was dealing with him because most UHAUL attendants are "assholes". I told him, quite the contrary because the guy at the Garden Grove location and the guy is the south LHC location was friendly, professional and accommodating. He further went on to say that this incident was clearly a case where the first rental location was lazy and didn't want to do their job correctly. Nevertheless, he didn't charge me for any extra days and left the rental as is, but my interaction with him was just not comfortable.

Needed help for an after hours drop off. We called the 800 number for assistance. Kevin was GREAT! He turned a very frustrating situation into a blessing. Thank you Kevin!

He rented a truck that broke down and we were stranded for several hours. I have never been able to reach him at his # on the contract. My granddaughter, Jessica, and I were dealing with UHaul when we finally took my personal vehicle off the trailer & drove to Coeur D'Alene, Idaho more than 7 hours later. This caused a hardship for us again because the men scheduled to unload were no longer available. Read the entries & record of phone calls in your computers. It was unacceptable service and I would never use UHaul again. The trailer was towed back to Missoula and the truck was finally towed to my apt in CDA, Idaho. The local UHaul in CDA refused to get a tow truck to take to their location. Martha in the Corporate office finally got the matter resolved and she got truck towed to local UHaul. The drive shaft on the ground. It was the worst service ever!

Don't tell customers that a certain piece of equipment my not be there when a person reserves it. What's the point of reserving it than?

Inside the truck was Filthy, smell smoke, can't see out of the windshield Make sure it's clean and everything works proper Example tailgate works properly. In my situation didn't.

Can't complain about anything. Everything went smoothly.

Same great service pleasure to do business with

I rented a truck at 3pm in the afternoon and was informed that I had to have truck back by 8:30 the following morning... but paid for 1 full day. Informed that the truck was rented for 9am. I never got completed what I wanted the truck for, but still returned the truck at 8am. I drove by the rental location at 10:30am and the truck was still sitting there. I think this is very unfair as I did pay for a full day, but was misinformed and could not use the truck. Very unfair.

The no contact registration went well. Should keep this even after Covid is over. Very nice person in Lake Havasu, new his job well and professional.

The gentleman that took care of my transaction was courteous and professional.