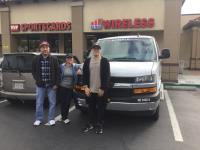 Open at an earlier hour

Need some one to check in the truck when it is returned! I forgot my cellphone in the van on 6/6 and I went back this afternoon(6/7) and they were closed and my rental had been rented. The approximate cost of the phone is $1000.00 plus to replace. In arrived at 3pm.

verify part pain in the ass

windshield was filthy. Other than that, vehicle was clean. Also, your automated check-in needs some work. I found the process to be cumbersome. Especially, your requirement for a second form of ID beyond the D.L., my picture and credit card. It was onerous.

Unlike other locations I have used in the past, this one was very self service.

We couldn't find the drop off box, so we asked the person inside EZ tech to show us the drop off box to put the keys in and he said first that we were at the wrong location and it was a mistake. After explaining Few times that we already checked out the truck return through the app on my mobile he said oh ok yes it is gere and I eill take the keys , then we were all set. I would just recommend that if the mobile app says put keys back in the drop off box, the box should be there or if it was there , it should be in a place where we can find it. Also what if we dropped the truck after business hours and WZ tech was closed , where would we deop the jeys then ? Just a suggestion for a smoother check out experience. Thank you !

Forgot to include the dolly that I had reserved then charged me for it anyway.

The app could use an upgrade to fix the "no network" notification when it's really just loading.

I was charged for 15 gallons of fuel when I did only 14 miles .I got the truck with 1/2 a tank of gasoline and I brought it back the same way. I have even send a picture showing that it was half when I got the truck. I need this to be corrected and I dispute this charge.

It was not clear that there was not parking for my car available at this location. As I checked out, the gentleman at the location said "I hope someone dropped you off. You can't park in the parking lot here." I had already parked in the shopping center parking lot and had to move my car to a nearby neighborhood to avoid getting towed while I was driving the truck.

Seats needed vacuuming as they were full of pet hair. I'm allergic & asthmatic. Otherwise the place was awesome ??. Equipment was good and people working there were very nice ????.

First time doing the mobile check-in / check-out process and it was awesome! Super easy, simple to follow. I'm definitely recommending this to anyone I know who needs a van or truck. Great job U-Haul!

The customer service was really bad. I am a first time renter and the man at the front desk was impatient and hesistant to run me through the process and the additional fees. The price says 19.95 plus .89 per mile and since i rented the truck for 2 hrs and drove 29 i should have payed around 50 something dollars not 78 dollars like i did. I even filled the tank back to the original state but since the truck was parked on a incline they still charged me an additional 10 dollars for the gas. Regardless of the price, the customer service was just poor. The man wasnt there initially attending the store and we had to wait for his return at my scheduled time of 1pm. And then when we returned to the store to return the truck he was talking on the phone, on speaker, and had an attitude when i had a few additional questions for him. He also spoke fast and got visibly irritated when i asked him to repeat himself. It was just unnecessary attitudes and stuff. I will not return to this location. Or ever rent a u-haul again.

It took us an hour to pick up the vehicle because the location could not check us as their system was not working correctly in and the gentleman there could not reach anyone form U-Haul. I had to call the 800 number and have the girl on the phone help us do a 24/7 pick up on the uhaul app. It was super time consuming and not user friendly.

U Haul is great but this is not a good representative & ive dealt with several in OC. First they said system was down then when working he didn't bring truck around so I had to walk around behind a strip mall to find the truck that matches the number on my key. Then he set the dolly out in the alley & made me drive up & load it. I'm a 66 yr old female & hadn't planned on doing everything myself. No other uhaul place has ever been so uncaring or blunt & short.

Nothing, all of my expectations were met and then some!! Very happy with the customer service I received. All of my concerns were addressed.

He charged me very very high and false items. I Would like to complain about this To u haUl headquarter and if course I will stop the payment to this location through my credit card.

big stability control issue,ones I hit 50 miles per hour "the truck was unable to maneuver comfortably. I didn't like that as soon as I left the parking lot got the low GAS light warning.... Truck wasn't clean but that was not a big deal for me.

Worse service , unfriendly manager, unreasonable charges The policy was not explained and the whole experience was very unpleasant

I was charged an extra day, when I returned the truck by 1130 same of rental date.