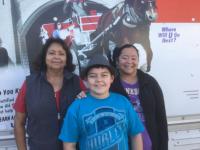 Customer service was bad, I had reservations 2 days prior went to get truck they didn't have it. Went to other locations couldn't get anything then did a 24hr site went to get truck and the battery was dead so I canceled my whole order.

the Smart check in was horrible, will never use again

Website stalled several times while trying to reserve and kept freezing after I submitted my order, but didn't get the confirmation right away, so assumed the order didn't go thru, which resulted in several orders being submitted and having to cancel them. Bo complaints and location, all website complaints...happened the other times i've rented also.

They weren't helpful, wouldn't help unhook the trailer, and were rude because they had to move a car to put the trailer where THEY wanted it to go.

The trailer worked for what I needed it to do but the wiring to the tail lights looked like a kid did it. The trailer wasnt very well maintained the wiring harness was also chewed up. It was like nobody dis a pre inspection before I got there. Later in way down the road one tire kept losing pressure.

When I reserved the tow dolly, we were told it would be at the Loyalty Inn in Pasco, WA. When we arrived there they had to "reroute" us to A and E. They were fine but the reservation call service wasn't too good. Could be better and wouldn't have cost us an extra hour picking up our unit. Both Loyalty Inn and A & E were fine to work with.

The shop and the staff were great. It was a little challenging getting the 26' truck out of the spot but fine.

This was the best service I've had at any U-haul. The service technician had me out the door in a jiffy. I didn't have to sign a stack of contracts, which usually mean their trying to hustle you some where in the fine prints. There were no hidden fees, every other place has tried to charge me for moving blankets when I didn't even get them. Great place to rent a truck if you are moving.

Did not assist when asked to assist in run-hitching the trailer. When I asked if uhaul could go ahead and in-hook the trailer from the hitch. The manager (she) flat-out refused to assist. would not use this location if I had a choice however, both time I rented a trailer, this drop off location was directed.

Left rear tires very worn. The treat flopped off the outside left rear tire on the hi way. The Truck should not have been allowed to go for 1600 mile trip with bad tires. Rt. Rear tires good. But both left rear worn. Left rear, inside tire badly worn.

I never saw them. I called 3 times and left messages and they never called me back.

I was given a truck with half a tank of gas and returned it with half a tank of gas and was charged almost $50 for not returning it full... why? It was a hassle to use your Uhaul app for both pick up and return. My reservation was changed a million times and you didn't have the right truck for me... and if I didn't have to use you again, I wouldn't. But I do. So... too bad for me. It wasn't a great experience. The only positive was Tijuana, your help desk agent who assisted me after I dropped off the truck and didn't know I had to take photos or access the odometer. She was the only good thing about this experience.

A&E Towing is in an ok location, with out a GPS it may be hard to find.

I was very pleased and staff was friendly and helpful. Truck ran fine, only problem is I had difficulty getting in and out of the 10ft truck. I am 70 and have back problems. And extra step would have been very appreciated.

The woman who helped me was great!! AWESOME customer service

It was the worst experience of my life The place we picked it up at didn't even come outside Let alone hook it up or make sure we had the right BALL SIZE which made us almost wreck about 100 times! It was horrid and could've been deadly

I made my reservation more than a month out, and I get a call the day prior saying the truck I requested would not be available. I was then told I would have to drive to another location 80 miles away to get the truck. After talking with the agent I end up having to take a smaller truck and a trailer costing me more then I had budgeted for this trip. The pickup location did not have the furniture pads I requested so I had to use my blankets and towels to protect my furniture. The 20' truck I had had a worn transmission and had problems shifting while driving, which I did not realize until I was up in the mountains. And when we picked up the trailer it looked fine, but once loaded it revealed it had a flat tire. I attempted to air it up at the gas station and realized it had a hole in it. So another setback on my move waiting over an hour to get back on the road. Over all I am extremely disappointed with U-haul which I have used exclusively throughout my career in the military, this experience has made me reconsider using them in the future.

The 1st trailer had a burned out brake light and no one was available to fix it. The 2nd trailer worked fine.