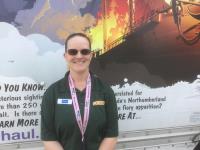 There was no key drop box and I was charged an extra day.

I like the new features for checking in on the mobile app I was not expecting that but, it was great that you have that in place it made securing the locations and the quality of the vehicle and from the mileage easier by using the phone with pictures thank you.

Vehicle was clean however the driver's seat cushion is split along a seam and there was a wire protruding which I had to bend to keep it from poking me.

Porter Sinclair's doesn't have a drop box for keys. We had to give them to the front desk of the gas station.

The truck had no trash in front or back. The front needed to be wiped down very dusty and dirty

People who work there are very rude and don't want to help customers. I returned the truck last night and because it was after hours even though this is a store location that is open when I returned it they refused to help me. I called uhaul last might to complain. Now today I call the location like I was told to do and some woman answered the phone then told me they dont have to help the customers after 5 pm. Then passed me off to a guy named Chris to talk too and as she did she told him I was NASTY on the phone!!! Very POOR CUSTOMER Service will never be using this location again.

Unable to answer my questions.

Worse experience ever at this location. Picked up a truck after 40 min wait and requested 6 blankets and attendant marked that 6 blankets were paid for. Drove to destination which was a near vacate house to find no blankets in truck and since moving heavy wood furniture needed the protection between the furniture and drove back to the Uhaul location and attendant said there were no blankets in the storage room. Attendant sent me to another location to pick up blankets and that location was closed. At drop off and before close of business at 2pm there was no attendant to check me out and a gas station attendant took the key. I immediately called Uhaul to ensure that all charges would be as expected since there was no one there to check out the truck. Also received an email from the manager stating "Do not ask for a free rental when your move has been completed! Shoddy business practices at this location best to check the reviews (majority at this location are bad) and use another Uhaul location since my experience with other Uhaul locations have been good.

Trucks were dirty. Windshields dirty and a feeling that trucks were not checked out before renting

Self check out and check in need attention a phone number ensured by someone that know how your online system works will be perfect.

I was given a truck that had trash inside the cab, which I cleaned out and filled the gas up to above the level I received it. However after returning the vehicle I was charged an extra $30 cleaning fee. When I called the location to inquire they claimed I left yard debris in the rear of the truck. I had the truck for 6hours and moved household furniture with it so no dirt, leaves or yard debris were in the truck. Horrible experience will not rent or recommend to others

People working there don't know what to do shut it down Lost over$70 going there had to put hold on paying till pending u-hual company would not work with me . issues there never use again Thanks

Everything was a great experience no complaints at all.

All was good. Representative was courteous.

Everything went smooth even with circumstances beyond my control adding a day was also a smooth process. Overall....happy with the experience!

Don dropped me off at the Gum street location after the U-haul scheduled for me at the Clearwater location was not turned in and dispatch rescheduled me for 9 P.M. versus the 12 Noon time I had ordered. At Gum street, the 17' long had a flat tire I noticed just before leaving, after Mandy had swept if out. She assisted me in getting a 20' which she also swept out. I did not check the cab under the seats before leaving as my time now had been over an hour delay with what took place above. I DID SWEEP out the back and yet was charged a $25 cleaning fee as the person I just spoke with stated there were beer cans and a water bottle under the seats in the front! He stated he has pictures... Disappointed with the issues and having to pay for someone else garbage up front. Had I had the time, I would have made a thorough inspection on my own prior to taking delivery. Not happy with being charge $25 over as I did fill to correct level and had swept back. : (. Scott Call (509) 438-1225

Nothing everyone was very nice and helpful!

The office is in a gas station minimart. It was strange , but the woman was efficient and nice. If it had been a man, i would not have been comfortable going behind to store counter and into the office. Also the location was a $25 taxi fare from my home!

The vehicle was extremely dirty. I was unable to see out of the windshield. I had to clean it before I left. If nothing else at least make sure the windshield is clean!!!!!

I liked the 24/7 check out/check in system. Wasn't explained well by the u-haul representative who I spoke to when inquiring about it because the location where I first scheduled my pick-up was changed. The dolly and pads were not inside the truck either but was quickly fixed by the clerk inside the store where the truck was located.

Tire pressure was low; we had to stop before we left town. We never received a call/text to tell us where to pick up, so we went to the location on the confirmation. They had no trucks and told us to call customer service. After waiting 10 minutes for someone to answer the phone, the gal was extremely helpful and tracked down our pick up location. from then on, it was fine