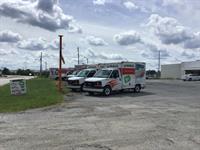 Fix the U-haul trash phone service. I couldn't get a hold of a human if I was on fire for an hour waiting on hold and being put on hold. Also, if the store is open, please be there. This would have helped me a lot in the moment.

I had to write a handwritten note on a napkin I slipped into the key return when returning my truck with special details since I was returning it after hours. It worked out great and the staff saw everything. It might be nice to have a place to leave comments when doing the digital return process system wide so that people feel more secure in leaving notes. Thanks for your help!

Super friendly and helpful staff! Very personable! Katrina and Chris made the process so easy- we will definitely be renting our future u-haul needs from this location!

They lost my credit card, they were very, very unprofessional and NO one working there wore a mask! when I went back the next day to try and get my credit card, they had a young lady in there who didn't speak a word of English and she was the only one working, so she was unable to help anyone at all. I ended up canceling my credit card, because it was obvious I was not going to get any help there! I did report this to UHAUL , but I never heard back from anyone. I will say that the truck usage was fine, but the service SUCKED!!!!!!!!!

Not in a very good neighborhood.

Provide a jack to the customer for the ability to un-hitch the trailer from the tow vehicle if needed.

The truck was missing it's catalytic converter, so it was very difficult to drive.(A friend diagnosed this when he heard the truck) Could only drive about 30 mph tops. I also requested to have a dolly and 6 furniture pads that were not in the truck as they should have been but I was charged for. I have always had pleasant experiences with Uhaul but this move was quite the hassle.

They guy we got the uhaul from was rude, and condescending. I would not get a uhaul from this location because of him. The uhual itself was in good condition and easy to use.

Truck was dirty on the inside. A simple vacuuming would have helped.

I have rented many uhaul trucks over the years and this location has been the best. We moved from Indiana to Washington and they made sure we had a newer truck that we wouldn't have problems on the long drive. I would highly recommend them!!

Make sure the cat isnt stolen ????

I have rented from U Haul in the past and have never had to give a personal reference to rent a truck, then your credit card processing system wasn't working good thing I had just stopped at the ATM or there would not have been a rental for me.

UHaul website was unable to determine my location when I arrived, so I was unable to begin process of picking up the van. I called UHaul customer service and was on hold for 20 minutes with no response, when I finally gave up. Was finally able to get the website to recognize my location. Was unable to approve or reject images during the vehicle check out procedure on the website. Vehicle was very dirty, the instrument panel was cracked and the vehicle had several noticeable dents in it, but I was unable to make note of these issues during the check out procedure. Entire online check out/return procedure is a hassle and I would not recommend it.

There was a short in the truck and had to pull over twice when it was loaded, no dash lights no turn signals no sensor lights

Weather is not a way to get an unexpected delay i have very expensive furniture an rain caused a 2 hour delay for me to get the truck returned we called to find out a late fee which no break was offered to us but actes of god dont get breaks.!!! Right. People there are friendly an professional but don't be late.

didn't need the truck for 24 hours. should have custom times

They charged me a late fee even though I brought the trailer 1 day early.

I don't know how to improve, but I want to give praise to the team at the Indy Trading Company for dealing with technical issues well, and still getting me my truck on time, They were great.

Horrible customer service, did not have the truck that I put on reservation 3 days prior. Put extra mileage on my bill, JUST HORRIBLE. AND THE SCHEDULING MANAGER DANIELLE IS EVEN WORSE!!!!!

The new U-Haul system could have worked a little better.

I had to rush there since they told me they were closing at 10:00 a.m. due to an issue. I got there and things went fine but I felt very rushed and was not able to ask questions since they had to leave.

There was dog hair all over the seats of the truck when I picked it up. I had to spend 20 minutes just cleaning the cab of the before I could use it. Other than that, everything was fine.