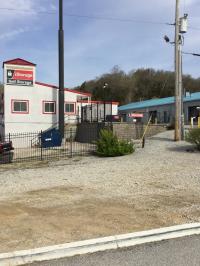 Make sure customers roll windows up especially when raining. The guy i rented it from was not friendly at all. And had no information at all on any questions i had asked.

Note: my review is of the 24/7 self check in system rather than the pick up location. We used the 24/7 self checkout to pick up our truck. We arrived at 7:00am per our reservation. Everything was smooth and easy until we had to wait for â€œapprovalâ€ on the self checkin site. We waited nearly 30 minutes which caused a Significant delay in the whole moving plan. This was extremely frustrating because we entered all the driver information Including license number when we placed the reservation weeks earlier. There was absolutely no need for â€œapprovalâ€ take 30 minutes when approval could have been completed weeks earlier. Equally frustrating is that while we waited for those 30 minutes, Uhaul customer service was completely unresponsive. There is a â€œchat with agentâ€ feature on the self checkin site. I initiated a chat every 5 minutes while we waited with zero response. I was also trying the 1-800 number while waiting and no one ever answered the phone there either. While this was no fault of the pick up location, my experience with Uhaul customer service and the self checkin process was unnecessarily frustrating. The self checkin system needs much improvement.

Returning the truck was a disaster l. The 1st scheduled drop off point would not accept it and were of no help at all!!! They told me to call Uhaul and I was on the phone on hold for 45 minutes and to top it off the personnel on phone were rude!The 2nd place wasn't any better! I will not use Uhaul again I'm going to try Penske

The woman running the place was one of those rare people who really tick me off. She was abrupt, rude and had little desire to help the customer. The equipment was great. the service sucked! I rarely give bad reviews.

I picked up the Uhaul after hours and since I was alone I left my car at the end of the lot. I was contacted the next afternoon by this location. I was told I needed to move my car off their property before they have it towed. Their lot is for their customers and employees. I asked since I rented a truck am I not a customer. Uhaul customers are not their customers. I was told that I needed to park at the commuter lot almost 1.5 miles away. I explained at the moment I had no way to get my car. They told me they would have it towed. I explained I could get it that evening. Then when I got my bill I was charged for dolly and furniture pads that I didn't request. Worst experience that I've had.

Website kept crashing. Lost all my info. U-Haul customer service called over and over while I was trying to move because their website lost my information. Very annoying. Than took 45 min to close out my rental when I returned because of website issues.

Customer service was fine. Experienced technical difficulties with website getting code. Wait time for 24 live was ridiculous waited for 20 minutes twice when my pickup was at 10am I did not get my truck till 12pm. Sides were scraped up and not noted so made sure to notate. And then told me it had to be back by 8pm when got the truck late. So hopefully there are no other issues.

Personnel on site couldn't locate keys to the equipment we were renting. Then identified through support that keys were in bed of truck but didn't have code. We were given 4 different codes to try; on site personnel didn't know how to use lock and it took almost 30 minutes to get into bed. We were supposed to get a credit for the inconvenience but haven't received. Very long process in the cold and rain. Then during the checkout process our link was expired and we were not able to upload or check in the condition of truck.

Booking over the internet was painful. They cancelled my reservation, double charged me and were hard to get ahold of. The store however, was so helpful, accommodating and nice.

Obtaining key was very hard to do

Install trailer jacks on your trailers, at least the heavier ones. It's not easy to lift a 12ft box trailer 2ft off the ground by yourself to put it on a hitch.

You might as well pull down all information you have on the internet. It is 100% wrong. The phone minutes place you on endless loops. The location hours of operation are incorrect. It was wayyyyy easier to just drive to the place I could see from the highway and take the risk that they would have what I want and be open. I trust your internet and automated phone prescence like I trust an unsolicited offer from a fucking Nigerian prince!

The experience was good and I would recommend them. Only problem I had was no fault of the company but the maker of the truck. The seat buckle needs to be loosened at the fasting spot so it doesnt dig into your hip.

I was very satisfied I would change anything.

Tail light was out on the trailer and we had to call for a.service truck to fix it.

No complaints. Easy rental and return after hour.

Nothing,everything was smooth going even for a holiday weekend ..

Fast friendly service, equipment was then when I needed it, and was clean and ready to go.

Got no help in hitching up the trailer, not even supervision to ensure it was done right. As a result I didn't screw the hitch ball lock all the way down (it felt tight but wasn't). The trailer came unhitched from the ball after I had driven about two miles, but fortunately in a driveway as it was being backed in. If this had happened on the highway it most likely would have been a catastrophe. Fyi, this wasn't the fault of the employee on duty. Apparently it's the policy of the owners of the storage unit property to not assist customers due to workers comp.