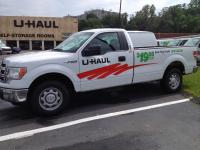 I rented a ban, but just it had two sites, and I had three man to help my movers, it was not satisfactory to me

I have been renting Uhaul truck from this location for the past 2 years without problems till recently. Very poor services. Now when you returned truck they purposely act like there was busy reason will be to you to leave so they will come and increase the bill since you already left by pretending that the gas mileage was not enough. It happened to me 2 times already. At this time I'm just going to stop renting truck from Uhaul

I wish I didn't have to go to different location. So far from. I actually order the trailer

We arrived about 7:30am to pick up the trailer. We prepaid to "save time at the counter". Staff told us that there was a with contract and it took about an hour to sort out in the end they said they would issue a refund and create a new contract for about the same price. The refund never came through and I had to request a refund through my credit card company. After that we hooked up the trailer (which had a few dents) while waiting for contract to be finialized. At 9:00 the contract was done and they said that we were good to go, so we tried to leave but a worker came and took the trailer off our car and said it needed to be fixed. We waited another 20 mins and asked them how long it would take for them to fix it. They called the worker in the back and were told it would be right up and they would provide the $50 reservation credit as the trailer was not ready in time. Because the trailer was taken away from us we also were not able to record the dents and marks on the trailer. When the trailer was finally brought back some of the dents were indeed fixed. The $50 credit was never applied... this is really the worst service I've ever had at any Uhaul or rental agency. The staff were also unsympathetic, even though the process took almost two hours and we did everything correctly. We had no issues returning the trailer.

It was a good experience especially Customer Service, from the time of calling to make reservations till drop off. Having USB power outlets in truck would be very helpful for long trips.

I would prefer that the keys were left in the vehicle or in a lock box, instead of having to pick up from inside the office.

Given the bad publicity on our local TV stations about the lack of cleanliness of u-haul trucks I was worried. The truck I rented was immaculate. Thank you.

All parties were professional

The website/app was hard to use. I didn't know what my account was supposed to be. Luckily, there was always an employee around to help. They were very good

Staff stayed past closing to help us get trailer hooked up

Seats torn, dirty center console, no previous damage on truck was marked, check out attendant was not wearing a mask inside the store. Location locked doors prior to 7 pm

the clerk was rude, and act like he couldn't get the system to work and I was telling him I see on price on the screen and he wanted to go back and forth with me about the price then going to say oh cause you using the pre paid that's why the price up coming to the price I told him I was seeing from the start. it took him like 30 min to process the papers I was already upset cause I scheduled my truck for the location two lights from my house and they made me go 20 miles from my house to pick up the truck from a rude, as clerk.

Staff aren't friendly, vehicle wasn't clean service lights were on and over customer service was very very poor. Extremely disappointed with the service at this location.

Customer service was poor and he had a nasty attitude. Truck only had one windshield wiper.

I think that if the Uhaul and equipment is returned early and has followed all rules of returning the truck. For example, any equipment blankets, gas level, etc. Then there should be some money returned if it is dropped off early.

The truck was very dirty, it looked as if someone lived inside of it but I didnt have time to return to the register because the line was long and it was extremely cold. Also the rep that helped me rent this truck did not explain that the card opener for the storage required first using #1 then #2, it felt like 16 degrees outside and the storage would not open so the evening staff at 6:55 was able to help me to get inside of the storage facility. I was so thankful that I arrived at 6:55 and not 7pm because i would have been stuck outside with my furniture.

The truck I used was old and needs to be replaced. the manual crank window knobs where missing, the sun visor attachment had a hole in it.

Entrance is not clearly marked. Location is very dim, and I couldn't see the employee behind the counter over the large pile of boxes for sale at the entrance. It was very confusing for myself, a first time consumer. I don't like that the pricing is advertised as one fee, but you'll likely end up paying at least double that. It's very misleading.