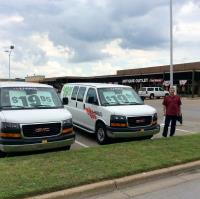 Have a separate checkout for uhaul from the other business at location.

This location was not in U-Haul facility and the gentleman stated he never had a trailer on site before. He didn't appear to be too happy that it was there. When hooking up the trailer to the U-Haul truck we noticed the cable to connect the truck to the trailer for the lights was missing. I took the truck to start packing up but left the trailer behind. They told me they would call me and let me know what I need to do. I did not hear back from them so I called and when I asked about the trailer the gentleman appear to be annoyed. He said I had to go to a U-Haul place to pick up a cable and then come back to pick up the trailer. I got the indication that if I wouldn't have called them they weren't going to call me to let me know that information. I asked the gentleman on the phone if he had called the U-Haul facility to let them know it was coming so that there wouldn't be any issues picking up the cable and he told me no I had to just go pick it up. I wasn't comfortable doing this as I've never used a U-Haul before and I would've figured that at least a call from the pick up facility to explain the situation was needed to allow for a smooth handover of a cable. I called the U-Haul site and it threw me to your U-Haul main line. I am driving to the new U-Haul facility to pick up the cable and I'm on the phone with the U-Haul mainline associate explaining the situation which she's told me she had never heard of before. Without going into anymore detail I was able to pick up the cable go back to the antique store to pick up the trailer and I was on my way. The whole situation was cumbersome in put me out of my way couple times to do something which I believe you all should've done for me. I would not rent from U-Haul again unless it's a U-Haul facility.

Nothing. Your representative was courteous and very knowledgable and made it very easy to rent your equipment.

I rent this truck for a church. I show him my tax number but I'm still charge a sales/rental tax. Please explain ? Kendall

I requested and paid for a furniture dolly. There was no furniture dolly in the truck when I picked it up. Please refund the 10 bucks I paid for it. Thanks. Otherwise, I always enjoy using your trucks.

Reservation was a 12noon location was to open at 12 but was not. Still had to wait 13 min to get the keys for the truck was told he had not been check in.Horrible experience moving is already stressful .I complete everything online enter all my information online I was expecting everything to be smooth and seamless if my reservation was at 12 the location should've been open at 12 just basic customer service. Contacted customer service and was on hold for a total of 16 minutes for them to tell me that I should've been able to pick up at the location off my smart phone not sure how to do that if the vehicle had not been checked back in from the night before . Upon Returning the vehicle the customer service rep at the antique center told me this was not his vehicle where did I get it from you can't park it back where you got it from very rude. This was my first experience with uhaul and hope this is not the standard.

I went to this place to pick up the U-Haul and it smelled like the most horrible smell ever. I can't get that smell out of my head. Also, the guy was friendly, but the location was very poor. I left my car there while I went to move and I was super concerned that it would get broken in. Also, The truck was not that great, because it took forever to transition between gears and the A/C would randomly turn off while driving.

I was supposed to have a dolly and furniture blankets but they were not in the UHaul when I arrived. I tried going into the Antique store to ask about the dolly and blankets but they were closed and I could not get them. When returning, I was still being billed for the blankets and dolly and the owner did not know how to get them removed. He said he would take care of it so I left the store without finishing the transaction. If he had provided the dolly and blankets then I think it would have been a good experience in using the app to get everything done.

Your system took forever and the process of checking in and trying to get a lockbox code was beyond frustrating.

The mobile check in and return was so easy and convenient.

Clean trucks after use and make renting easier

Was never able to pick up rental due to lock box issues. Still got charged. Terrible

The man , Ray charged me for two days. He did not accept me leaving the truck and keys, in the drop box after he closed. I did leave the truck before the next morning. I tried contacting him all day because I became concerned when I started getting an email that the truck rents in 12 hour increments. His workers were not able to contact him all day even though I left 3 messages he only emailed me and called me at 6:50pm. I am owed one day of charges. Thank you.

This has been a horrible experience. I was charged double for NO reason. The entire process was a hassle. I am severely disappointed.

Have the right payment rates when people arrive

Be upfront about your pricing. I thought i was getting a truck for $30 instead im paying $116 that's bullshit. Never doing business with you again

The uhaul has a faulty air conditioner that only sometimes blows cold air. The part you put your stuff in was FILLED with ROACHES!! They were everywhere! It was the only one available so the owner cleaned and sprayed it before we took it putting us an hour behind when we needed to be at our location. We still found several when moving and had to bomb the truck before we took our stuff out of it to be sure they didn't go to the new house with us! Disgusting!

Very close and convenient to my location, good price.