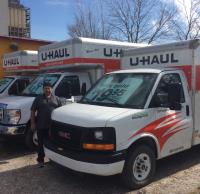 They opened an hour late (11am) on Sunday 1.24.21 then he couldn't pull up my national account reservation (22586230) I wasted 2.5 hours trying to get my truck. I had to cancel the reservation and pay with my credit card. He told me I would only be charged half rate on the truck. When I filled out the forms I specifically said no to the safe move fee (14.00) when I returned the truck he refused to check me in said he was alone and couldn't go out to check it in. The following morning I received the receipt which was the full fee and the 14.00 fee. I called to dispute the charges and I was sent to numerous people then they sent me to our national account salesman I left a message and never heard from anyone. You failed all around on this rental

How about actually giving the customer the dolly's and moving blankets they ordered.

Area was a little sketchy at night.

Service was extremely slow is an understatement. Although I was the first in line, cashier had me wait while he checked out 8 different patrons before completing my reservation. Meanwhile, a fuel line at the gas station where I rented the truck broke off in the middle of someone getting gas. Gas was gushing all over the place. Cashiers only response was â€œoh fuck!â€ I had to remind him to turn of the gas line. One of those, â€œcan't make this shit upâ€ moments. Guy is completely incompetent. The fact that he's managed to keep himself alive this long is a fucking miracle. Had any other place been available to rent a truck I certainly would have gone elsewhere. Two thumbs down. Do not recommend. Dislike button. Zero stars. Hated it. Wouldn't go back even if you paid me.

Get employees that know how to us the computer

The pickup took a long time, with the staff handling other Uhaul customers and regular gas station convenience store customers. There were no furniture blankets and furniture dollies, and I reserved both online, no one told me those would not be available at any time before I pick up the truck, I would have prepared for it if I knew those would not be available. My reservation was changed from a place close to my house to another one much further, which increase the miles drove with the truck, and increased my charges. This was very upsetting.

I was switched last minute to a 24/7 pickup location and wasn't told how to go about getting my truck. It took 1 1/2 hours and 3 phone calls to customer service. The owner of this location did all he could to help me

I was charged twice for the Uhaul truck that was returned the same day on time at the Harrisburg location. I done know who actually double charge me but I am not happy about that outcome.

For an unexplained reason my reservation was expired, then moved from 4:30 am to 8 am, then I had to spend a while on the phone to get it fixed. After about 30 minutes on the phone I was setup with a new truck. At least I could pick-up before 8am...

The attendant was a great help.

Worst customer service, owner was confusing and keeps calling at odd times of the day. Location was very scary. bad part of town I'm surprised the little dingy gas station was associated with uhaul. Saw the reviews of that uhaul online and I completely agree. Never ever returning there.

I created the reservation for this rental a month in advance. There was no need to change anything, but the owner here altered my reservation. He changed the drop off location from Austin to a town over a hundred miles away from Austin, without my knowledge. When I dropped the Uhaul off where I had designated originally, in Austin, they almost charged me a $600 wrong return location fee. Based on other reviews of this location i've seen, this is a recurring problem here!

The person who set up my rental did not put the proper drop off location of San Jose but set it back at Houston. I ended up paying couple hundred dollars more than the quote I got from the app. The truck driver headlight was out and the cabin was dirty.

The most janky uhaul experience of my life!! I reserved a 20â€ for $128 online, once I got there the corner store clerk asked me for $280!!! He was of no help complete poor customer service. I then called the 1888 number and payed through the system over the phone with a representative. She the got me to $160!? I was in such a rush I said that's fine and went with it. She couldn't tell me why he was up charging for.

This is not the best part of town.. There were a lot of homeless people wondering this establishment. Also the gentleman whom helped me took over an hour to process this request, it was only after I called customer service that he was able to complete the process..I had originally reserved a unit on 1960 and I-45, Uhaul changed it to location 22 miles away..WHAT'S THE PURPOSE OF THE RESERVATION? I LOST 2 1/2 HOURS BECAUSE OF THIS CHANGE..

This was 1000 times better than dealing with the whole rigamarole of the big store in Midtown. Yea it's a gas station that rents uhauls, but I was in and out in 10 minutes and the guy was super nice.

I was scheduled to pick up at Louisiana location in Houston. They changed it to A small gas station on Harrisburg. It was not even a uhaul station. It was not professional. Once I got to my destination I realized the moving blankets were not included. I had ordered and paid for them. Not a good experience

I was charged for 6 days after I used it for 5 days and 1 hour. They didn't know how to run my card and I was told to talk to the persons â€œbossâ€ on their speaker phone at Harrisburg location. It's also a dirty gas station. Way to go u-haul, you really needed that extra $44 from a moving college student because of one hour. I'll be sure to use Penske next time.

It seemed like the person working at the gas station hadn't actually rented out a uhaul to anyone before. He kept having to call another guy to walk him through the process and it took forever to get checked in even though I did the entire check in process online.

I understand this is a small service station that rent/owns a few trucks which is why the customer service should be really good. While he serviced us he was having a phone conversation and he never got off the phone for a personal acknowledgment. We asked about the damage on the truck and he said if you see an x near the damage that means we already know the damage is there. We looked for the x and didn't see any near the damage. We were on a time schedule and did not have time to locate another Uhaul rental facility so we used their services hoping that we wouldn't have any issues on return.

Good coordination between uhaul and their remote pickup locations