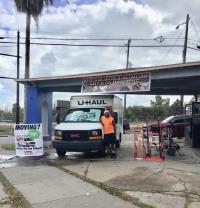 Not charge your next customer for a disabled box truck for 10 days if they had called in and told the customer service rep that it was not functioning and that it was parked outside your house so they can come pick it up but instead sat there for 10 days and paid for a mechanic to fix it out of pocket so they can return it only to charge them not once but twice for the 10 days it was sitting waiting for uhaul to pick it up but never did come. This has been add a headache to say the least for the moment the truck had a mechanical breakdown in my experience with U-Haul has been horrible so far because the dispute hasn't been resolved yet and hopefully will be reimbursed for the unused amount of days when the car was disabled sitting waiting for somebody to pick it up so until then I will wait patiently and hopefully U-Haul will make the right choice and reimbursement and not charge me twice which Is unbelievable that I would be charged twice for the total amount upwards of $1000 for two days of rental so till then have a safe and blessed new year

The location opened up late, after 8:30 in the morning. My reservation was for 8 am. I ordered a dolly with the truck and I did not receive it. I called and notified the location and was told k would get a refund for it, which I have yet to see. Not having the dolly and the location opening up late set me back.

Very nice people there, the returning process is super-easy.

Keep up the great work

I'm not okay with being extra money for after hour charge. When I had it for not even two hours in I rented it for 24hrs but I will like to speak to one about this matter

Helpful hooking up and discconnecti g

Representative was not on site to take vehicle, was charged a cleaning fee ,and mileage when that was not part of contract

Really great service at the pick up and drop off site.

Very professional, knowledge and timely staff; will recommend this location to all Family, Friends and Associates

No one was there, but the process to return it by using the app was helpful.

Not friendly at all, and the guy charged me 25 bucks to â€œcleanâ€ the truck. I left a water bottle and a Red Bull in the truck. I'll never use U-Haul again nor will I recommend it to anyone. Not impressed with this company. Also had to drive over 100 miles to pick up a truck even though we reserved it well ahead of time.

The worker was friendly and attentive

I contact the second location around 8:30p, the gentleman told me they were closed but I could still drop the equipment off. It was dropped off around 9pm at the latest, i waited until Monday to receive a confirmation of receipt maybe a final email, a receipt with extra fees, but no emails! I call the vendor and request a receipt and was told two days later they still had not received the trailer I rented. i had physical proof via photo it was dropped there! Even, telling the vendor that he still stated the property was stolen. After, I told him I was about to contact the customer service number, I received a call stating it had been found and rented it was just a glitch in the system. All the notes from Dallas drive was there but you still rent out a nonworking trailer for someone else to be in danger. Smh, even if it's not the actual Uhaul facility you have to make sure the private/ unauthorized dealers are providing the same customer service especially when being brand by uhaul.

Excellent pleasant and well mannered service person who helped me hitch up and guided me on my concerns. 10 out of 10 would recommend.

There is absolutely no place to park and leave a car while we have the rental. Wasn't busy but kept me waiting so I was late to meet several people who were helping. Then HE had to struggle to get the truck started so I was afraid to turn off the engine while we loaded for fear it wouldn't start again. When we returned it after 2 hours the computer was down so he couldn't ck it in and the email receipt shows we were actually late returning but I had a picture taken of the truck dash showing mileage and is time stamped. Ultimately we were billed correctly,

Was to worried about his wife and kid in the car. So was rushing to do everything. Did tell me I was going to get a $19 refund because I was charged $638 and that the new charges would be $619. When I returned it today I was charged the $638 and not the $619 he said

Truck and tow dolly was not that clean but good enough to use them.

Help unhook trailers. Be there in person to check in.

No one there when dropping. It was closedi had to drop it there my self and almostgot hurt as the concrete is all uneven

I was billed for two days when when I only had the trailer for several hours, I returned the trailer after hours and called in tom let CS know that i had returned it, the link that was texted to me had "expired" so I called in and let CS kn ow that I dropped it off and there was a 15 minute hold time, so I left while still on the phone. the customer service at Uhaul noted that I returned the trailer at 6pm or so the same day but I still got charged for two days. I have not had a refund posted as of yet. Contract Number 87084156.

The merchant was flagged by my bank for previous fraudulent activity so I was delayed in getting my truck & got on the road a day late. Then the truck had issues & further delayed my trip because it wouldn't go over 65mph. Then it finally broke down & I was stranded on the road causing further delays & I was not able to start my job on time. Then after being told that I wouldn't be charged anything further I was causing overdraft charges to my account & it still has not been resolved so the charge is still there & I am unable to use my bank account! I have called several times & still it has not been resolved!

This was an unmanned drop off location