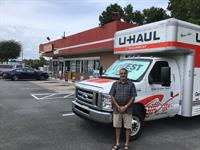 Very happy with my experience

Waited for 1 hour for the owner to show up twice at 2 locations this owner has. Had a 4 man crew waiting both times and told this jerk what was going on. No apologize for any hold ups just a f you attitude. Ryder has so much better service. You have lost a future customer .

Everything was perfect. Staff was friendly and helpful. Great experience. I will rent from this location again.

Ok, where to start here... first I originally rented a van from a closer location the website said it was available and let me book it and when I got there, they didn't even carry that vehicle. Then I got this rental and you charged me for 2 days when I returned it 9 minutes under the 24 hour limit. I will never ever use u-haul again.

Don't need to improve on anything. Everything was excellent!

Make sure all the dirt, broken glass And bugs are cleaned out the back of the truck

The owner of this rental location is crude and argumentative. I went through all the steps on line, after being approved, I entered the store. The man was telling me that I was not approved because I didn't give him my DL. So I handed it to him, where then he said he had to see if he had the truck. I informed him that the truck was outside and gave him the truck number that the website had assigned me. He then told me that the website was all wrong. (Mind you he rented me the same truck). He then asked me for my international driver's license. I told him that I don't have one. He proceeded to yell oh yes you do, it's on your website. I told him no, that wasn't the case. He then says I'm lying. At that point I'm ready to smack him upside his head. The website says your all set pick up your keys, and 35 minutes later I'm still trying to get the keys. I have to get somewhere and this man is just flat out being rude and crass as hell. So now he's going on how I screwed this all up on the online check in. Still don't know what he was actually talking about. When I tried to explain that it was pretty easy, his reply was .. "Not for you, you don't believe me, you come see".. so when I said okay show me, I wanna see this bullshit " he then replies no no you not come over this counter. You want truck or go somewhere else.. But it doesn't end there.. So I had out to the truck, I sanitized everything inside first. The guy comes out and tells me his girl cleaned truck, not to use my lysol wipes on his truck..whatever.. Now I'm returning the truck. The minute I come into the parking lot he comes running out the door. So he guides me backing in to a tight spot, and I'm thinking okay he just wanted to help me park. Well he absolutely killed that. He opens my door leans across me to take a pic of the dashboard. Totally invading my personal space. I think over all of today's events, this one pissed me off the most. This man doesn't know me and I damn sure don't know him. So while I will continue to use Uhaul, I will never stop foot at this place for a rental ever again.

Atul was very helpful and did a wonderful job for us. I think his customer service was wonderful and am happy to say I will be using him again!!

How can you improve on perfection. Location was convenient and agent was very helpful.

The Attendant was very nice and helpful !!

Everyone was very nice and helpful

I told him I did not want coverage and then he added it anyway. When I asked about the price being higher than when I looked online he told me it was taxes. My dad paid over the phone and when he asked what was on it he did not tell him the coverage was on their either. I signed the paperwork without looking because there was a line behind me at the counter trying to pay for their store needs. He them locked up and came outside to hook up trailer and stuff. He had me get in and make sure lights worked on trailer he them told me to go I was good but after getting on the road with my family following me they told me I had no right lights at all on the trailer.

The attendant was awesome and very helpful in my return. Thanks

Reservation was for small 15ft truck. Recurved a call less than 2 hrs before picking up to go to different location. Received a 26ft truck that was too large to fit into storage area. We had to park it and walk our furniture to truck. Truck was filthy with broken glass,leaves, and live ants inside. Uhual issued a $40 credit for when we returned truck but lady at drop off site wouldn't honor it and charged us full price & proceeded to argue with me. Eventually she called her supervisor who said we would get $40 back in 5 business days. REALLY WISH I WAS SIMPLY TOLD TRUCK WAS UNAVAILABLE AT TIME OF RESERVATION. Rented from Uhual many times & have never had an experience like this. It was beyond horrible. Very dissapointed with uhual. Truck also had a ton of exterior damage & needs an alignment. Steering wheel shook like crazy while driving. Thanks

make sure what you are quoted that is what you pay !! quoted $150.00 but we had to pay $191. 00 don't feel that is good business we had to pay extra $41.00 guess we were quoted the wrong price we should not pay for someone mistake. other than that everything was okay!!

Did not catch the gentlemen's name but he was very polite and easy to work with.

The store where we rented the uhaul trailer was very kind and helpful. Highly will recommend there store. Thank you. Mark Christy

Trailer didn't work right. The trailer brakes wouldn't recognize even after switching from the 4pin to an adapter to plug it into the 7 blade plug.

I rented a car dolly in Florida on Tuesday Sept 4 for one way trip to Arkansas. I ask for a 2 day rental, and was told I could only do a 4 day rental. Explained I didn't need it for that long and could I get it for less time and cheaper amount. I was assured if it was returned earlier then I would be issued money back. It was returned before noon on Sept 6 at Magnolia location. The lady in that office said she could not return any of my money even tho I only used it for 2 1/2 days out of the 4. I am very disappointed with the service I have received. Mona Molar