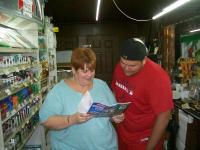 it was a very mini mart

I had to hook the trailer myself parking area was not suitable for self hitching to truck and had to ask other patrons to help me out.

The employee did not help when we were picking up the tow dolly. The dolly was stuck under a uhaul trailer and she just stood there saying I dont know how we are going to get it out. We had to come back the next day which put us behind schedule moving out of state. She was rude and never gave me a copy of the contract because the printer was down. I had to call her 2 times to get it emailed.

They had not checked in or cleaned the truck from the night before. They were not prepared for my pickup. They had no supplies that I asked for. The UHaul computers were down so I had trouble checking out the truck. I had to call another dealer, EZ WHEELZ, and he was able to get the blankets and dolly that I had ordered. Jason had to call Asian Food Mart and tell them how to enter my information and pay for the truck. He told me that I was not covered by Safemove until I was in the computer as having the truck. Nice to know that. That was the reason that I asked for them to begin with and not a mini mart in the middle of nowhere. I highly recommend Jason and EZWHEELZ in Newnan GA.

This location is very unprofessional. I recieve my rental 2 hours late.

I reserved for pick up online for 7:30 a.m. When i get to the store to pick up i find out there are not set up to do the 24/7 truck share. So i had to come back when the store opened at 10 a.m. Then when i arrive at 10 a.m the lady that does the uhaul services there was off that day so the lasy working did not know what to do and had to keep calling different people to get help. Everything put me 4 hours behind on my moving. Very unorganized and not professional.

Adapters for the signal light should be offered, although it wasn't that big of a deal for us we had one in the truck.

Dropped off was told I didn't need to do anything else. Found out later truck was never checked in and it is now three days later and still nothing and no deposit returned. Not happy.

I rented an enclosed trailer. 6'x12'. Trailer wes parked in a muddy area behind a convienience store. No help in connecting no instruction, just sign paper and that was it. Im 67 and could barly pick up the trailer tongue out of the mud. A passer by did offer to help. Was not sure how to connect the three chains??? My trailer only has two. I learned later when dropping off the trailer that the third chain was the emergency brake incase the trailer came loose. I had it connected wrong. Also i did not have the toung tight enough on the ball. Again no instructions were given, no inspection, if you are inexperienced in renting an enclosed trailer, i would not recommend this pick up point.

Personnel very friendly and helpful. Answered all of my questions. Couldn't have been a better experience.

My pick up reservation was set for 10AM that day. I was there promptly at my reservation time after driving 2 hours to get there due to being on a very tight schedule for buying a vehicle in LaGrange. The owner of the station was over an hour late causing the purchase of the vehicle to fall through due to the sellers schedule. Ultimately it lost me thousands of dollars because I buy and sell vehicles and also cost me 5 hours of my time with travel and waiting for the station owner to finally show up. U-hauls Representative I spoke to on the phone that day was very helpful and went to great lengths to fix the situation. Only positive remark I can give.

I didn't authorize U-Haul to draft anymore money off of my card. And the did today for milage and gas. I'm livid?? they should've at least call

This location saved us. U-Haul let us reserve a truck online that they didn't have in Atlanta. And even after being on the line with their customer support, couldn't find us a truck. Asian Foods saved our move. Period.

You could not change the pickup and drop off location that I reserved a day before moving the truck was filthy and empty I will never use uhaul again nor will I let anyone I know use your crappy service manager gives you the run-around and nothing but excuses. VERY VERY DISAPPOINTED with the entire experience and will be consulting my attorney about this.

Amy did an awesome job getting a uhaul truck for me. Everything was great!

Amy was very helpful and polite. I was in and out quickly, unlike some locations that do more than just rent U Haul.