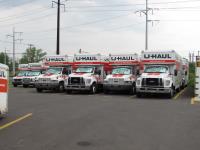 The original cargo van I was supposed to be given had a crack in the windshield & had to be swapped out. In the second van, I found Home Depot receipts dated June & December 2020 in the glove box. I found a U-Haul receipt dated 2/6/21 in one of the doors - both the drivers side & passenger doors were full of garbage. On the floor, behind the drivers seat, I also found a white plastic garbage bag, and orange screw driver, a rubber band & a pen. The back of the van wasn't horribly filthy, but you could definitely tell it had not been swept out after the last client. Don't you folks still assess a cleaning fee if the vehicle is returned dirty?(You should - the last two times I have rented from you, I have picked-up dirty vehicles, which I have always returned clean! I NEVER RECEIVED a final receipt after I returned the vehicle - in the past, I have always been given the option of a receipt (paper or email). Parking lot was an ice skating rink - large patches of ice that was visible as well as black ice....definitely needed to have salt spread. I ended up falling on a patch of black ice, on the way to my car, after I returned the van. I got to your store approximately 7:15 am & quite obvious that the "closer" from the night before couldn't even be bothered to sweep/mop the floor of the store.

I told the person my issues when I dropped off the truck.... he didn't seem concerned. The brakes on the truck we're HORRIBLE- luckily we didn't have to travel far overall, but it was definitely concerning. Second, the truck was not clean... underneath the middle seat there was a smashed cinnamon bun with sticky sugar everywhere. It had obviously been there awhile, even though there was a lot of it. The cab smell was nauseating. Not sure if I'll rent from haul again.

Agent was willing to dig my preferred trailer out of the snow & then modify the rental rate. Nice work !!!

I was told the truck had 3/4 of a tank when I picked it up but it had only half a tank. I took a picture with intent to show when I returned, but returned after hours so I just refilled above 3/4 to avoid any charges. Slightly annoyed by that, but overall saved a lot of money going through uhaul vs Penske. Satisfied and will use again.

I rented a cargo van. The van (particularly the back portion) was filthy- never swept out after the previous renter. Upfront, I found a rental agreement from October 2020, an empty "instruction" packet and a used rag in the cab. Truck had a funky smell - an air freshener was in the glove box, but it wasn't doing any good. Windshield fluid was low - this time of year, it should be checked and topped off a little more frequently. Staff at the facility were both helpful and friendly.

We had to wait thirty minutes past our pick-up time for the employee at the location to come to work. He was supposed to open the store at 7 and did not arrive until after 830. Additionally, the latch for the ramp was very worn when we got our truck. This made us uneasy moving as the ramp had one good connection to the truck and one connection that was ready to cave in.

I love uhaul and would recommend to any one who asks! Love y'all guys

The clerk was late getting to the store. The keys for the truck I reserved were missing. The share app did not work well.

1. Trucks should be listed by *internal* dimension, not total length. 2. The first option presented online should be "local" or "one way"; the distinction was not particularly clear.

The location was great. Uhaul changed the location of my pick-up which was extremely inconvenient.

Customer relations are very nice. Desk do not cause any difficulties for the customer. They do their leasing transactions very quickly. Offices are very clean but the trÄ±cks are a little neglected.

Improve your online reservation website. It is slow and pages freezes

Location did not open until twenty two minutes after the posted time of 7AM. While waiting I called Uhaul and had to hold and talk to two different individuals neither of whom apologized for the inconvenience I experienced. Once I got to my destination and opened the truck I found two empty pallets and some other debris on the floor. Overall a poor experience.

Great service in NY. Only thing I can suggest is that I get my emailed receipt of payment, which the guys said they'd send via email. I did not get a receipt yet. Thanks Dan

Would have been perfect if dolly was available closer for me. Caused extra time and fuel for the commute.

Truck drove poorly; steering wheel locked wash time I stopped and turned off the engine and the parking brake was almost completely broken therefore making it extremely difficult to unlock and restart the truck.

Rude! Had to ask for help 3x from 3 employees just hanging out on their phones. Never again!

Charged me for dolly and cloth, neither of which were on the truck. I contacted them with no response

When I drove the truck home on the first night, it was given to me with the passenger door not closed all the way so when I turned out of the lot the door came open. Additionally, the truck which I rented was absolutely dangerous to drive, the steering box is not in good condition which made it almost impossible to keep in between the lines while driving on the highway. And finally, the truck had absolutely zero windshield washer fluid in it which is absolutely unacceptable in Western New York in the middle of winter. While driving on the highway, it was nearly impossible to see through the windscreen, which combined with the poor condition of the steering box made this truck a death trap.

I did not fit in the smallest box truck as I am well over 6'. However your staff made sure I got the next size up for no extra cost. It would be handy if you stated on your rental site that it doesn't fit tall people. I am used to needing to go one size up, and would have been very upset if there hadn't been a truck available that I could actually physically drive.