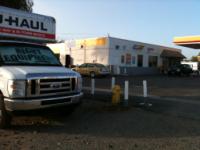 The cashier had no training. Even though I completed the entire process online to save time, it took 45 minutes because she had to have someone help her over the phone. The return took 25 minutes for the same reasons.

Empty gravel lot no signage except one U-Haul banner. Hard to know if you're in the right place??? A sign that says â€œreturn hereâ€œ would be nice

Took 45 minutes to pick up a prepaid trailer because "the system went down" again. No one to help lift the trailer to attach it to the hitch on my truck. I am a 110 lb female.

Location was convenient. No walk around or instruction on truck. Just handed the keys.

The location name was wrong! I put extra miles because I had to keep going around in circles to look for it then finally figure it out and was told just to leave it on an empty lot and the person encharged of the paperwork was not there so was told to park and leave the keys with the gas station attendant. The lady was very nice but that wasnt her job. Left there not knowing if it actually was the right place or not and called the 800 number and was told I needed to to a walk through after I left. Very disappointing.

Their computers were non-functional, processing the trailer rental took 45 minutes, they just handed me a set of wires and sent me out to manage all the connections (hitch, electrical, etc.) to my car. They also didn't have the furniture pads/blankets that I had ordered, nor did they have the dolly.

The lady in Hamilton City where we picked it up from informed my husband and I that we had to return it by 5 o'clock. My husband and I hustled and worked hard to meet that time and brought it back by 4:45 to be informed that we were late and it should've been there by 11. We were charge for an additional day. We informed the clerk/person who we dropped it off with that we were told 5 o'clock they said we needed to take it up with the U-Haul. that we would be charged. After a long day of moving in the heat of 104 we did not wanna argue and paid for the additional day.

Only one person in front of me in line, still took 30 minutes. Floor in truck cab a mess of sticky goo (spilled soda?).

Negative review not based on location but the process. First of all its not a shell. Some other name. Trucks are parked down the road which makes it more difficult to find. Employee from lakeside uhaul tried to have me drop the truck off in Chico (60 miles out of the way from my destination) then a different location. But she said she could check a customer undecided box, therefore allowing me to drop it off at any uhaul location. Sounded good. Tried to drop it in orland but location was not set up yet. Employee said closest uhaul was corning, so I drove there (18 miles) get to corning uhaul which is more of a repair shop. Employee said I could not return it there because Hamilton shell was on my contract another 20 miles to Hamilton. Couldn't find place. Name is wrong. Employee never returned a uhaul before. Then had to get a ride home. Nightmare. Took most of the day just to drop the damn truck off

Because this location is a gas station, convenience store & Subway restaurant it was busy when we arrived for the drop off, but our wait for assistance was not long at all. Staff was very polite and friendly. We had no issues with our return at all. Definitely nice to not have to drive the additional 10+ miles to a drop off location in the next town over.

the attendant did not leave her office to do a walk around nor insure that I was hooked up legally.. She was operating a busy gas station mini-market and U-Haul office with no help.

It took them about almost an hour and a half for them to get the auto transport. They're system was having glitches and they had to call U-Haul directly. The equipment that was provided was extremely rusty that the ratchets weren't working. We had to pay auto zone to put an extra ratchet on our vehicle. Overall it is a terrible location. I will never go there again

I drove three hours. When i got to truck rental they were closed. It said on the web page. The u haul lady assured me they were open. Had to drive extra half hour to get truck. Very unsatisfied. Wont use. U haul again!!!!

Truck was dirty in interior. Trucks parked in muddy area. Employee of gas station did not know how to check out truck got frustrated and handed it to other employee. No printed receipt available as printer wasn't working.

Disorganized. Unfamiliar with the process on the computer. Took at least 45 minutes to process the rental that had been reserved and preconfirmed. There credit/debit card reader didn't work and it took them several times to get the charge to get approved. They told me my card had been denied when I had more than enough in my account to cover the charge. We were the only ones getting a uhaul so it wasn't like there was anything else going on. The first employee had to ask a 2nd employee who had to ask the owner who also didn't know what to do. So then they had to call the other owners on the phone. Threw us off our schedule for the move by an hour. One of the worst uhaul experiences. The location wasn't where I had reserved. I would not have picked this location that was 10 miles away and I do not recommend anyone using this location to rent a Uhaul.

Only one cashier,did great job under pressure.

It is always busy in the store/gas station. As long as you know it will take 15 to 20 minutes to complete the transaction everything is fine. I will continue to rent from this location as long as they have the size trailer I need. The selection is not great but I'm limited in what I can tow.

Horrible experience. Won't be renting from you guys again.

Actually try training the people so they can provide some kind of service. I was the only customer and it took 3hrs to get the paperwork done from my online reservation. Then left to connect the trailer by myself, no light extension available, and had to drive off without trailer lights to waste the rest of the entire day finding one. INSANE how incompetent!!! U haul, how in the hell did you ever get to the size you are now with so many idiots? How have you not been sued out of existence? Remarkable really how clueless everyone I spoke to was -- I still swear I was in an episode of the twilight zone. Seems more plausible than the level of incompetence I encountered.

Inconpetent, slow and frustrating experience. Get someone who knows how to work the computer and understands the rental process. A transaction that should've taken 5 minutes took 25 and left everyone involved flustered and irritated.

I will never use Uhaul Company again. I was charged an additional day rental, on a trailer, when I was 3 hours late, due to the fact, that, they would not let me pick it up, past 4:00pm, on Saturday. I have always used your company, for any of my needs, that, will end today. I am glad you need the money more than myself. This is the poorest Customer Service, I have ever received, from a Company.

According to the store operator, they do not rent many U-Haul trailers here. I and a friend of the lady store operator had to hook up the trailer. I requested 2 dozen blankets. They only had 6 and they were dirty.

Employee needs to have knowledge on hooking up trailer to hitch. Had to take electrical attachment from another trailer.