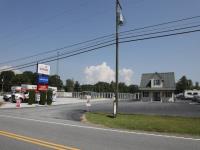 U-Haul moved my pick-up location without telling. Me I spent hours driving and calling around because this location was CLOSED when I went for pick up. The manager at the location was apologetic when the called me on Sunday to find out what had happened, although it wasn't their fault. U-Haul's central reservation system is terrible and very unreliable. The people we dealt with were polite and helpful in person.

Limited hours for drop off. Person on site knew nothing so we left keys in drop box. They then charged us for gas saying we didn't fill it up enough. We filled it up right where we got it. Just another way to nickle and dime the customer.

Very nice people working the counter and they helped me with everything I needed.

I really appreciated Yolanda who helped me so much.

While I very much appreciated Storage Rentals, the original rental was at another location that opened little later than 5:30 pm. Please update the website to accurately reflect the availability of rentals. This was the second time a change in location was made the last min which caused significant adjustment on my end to avoid cancelling moving plans and commitments. Thank you!

The first place did not rent Uhauls and I had to call and was sent to this place. They would not hook up the trailer statig they were a storage company and not a UHaul represented company. I've rented a lot of UHaul trailers and every one has insisted they hook up the trailer. When I turned it in their computers were down and I could not get a receipt.

Yolanda was awesome. Super friendly and very informative and helpful!

Pricing was incorrect. Called to extend return date and I was informed that the change to the # of days would not cause a change to the billing amount. When truck was returned the bill was higher than expected. Rental location advised me to contact UHaul. Had I known up front when making the change I would've returned truck and rented when I needed it again so I could avoid additional charges.

Yolanda went above and beyond to help me out with my rental. She is extremely knowledgeable with policies and procedures as well customer service. This was one of the best if not the best uhaul experience I have ever had. Thank you storage renters of america!

The owner refused to help me hook up or give directions in hooking up the trailer. She said to ask the man in the parking lot who was NOT an employee. Thankfully the man helped me. She rolled her eyes when I said he said she needed to check my blinkers/brake lights. She then made me wait ten minutes before coming out to look it over. When dropping off the U-Haul the gentleman said she should have also taken a photo of the hookup, she did not. Then she didn't give me the dolly ( I thought it was in the U-Haul) so once I got home (20 min drive) I called and she said â€œwell we close at 5:30â€. I asked if there was any other options and she rudely chuckled and said no, That's it. This experience with this U-Haul rental business was disgusting. And when I arrived to drop off the U-Haul trailer, it was even more clear how unprofessional she was. The drop off location deserves the highest marks while storage of America deserves the lowest. When I called twice to The main number of Storage of America, they said to call U-Haul bc it's not their problem.

The lady working could not have been more pleasant and wonderful!

Jamie was a sweetheart . All smiles and super polite and nice . She was helpfuland ptient as well.

I am a female senior citizen and I had to park and disconnect the trailer myself. I have rented many trailers from uhaul and have never experienced self service.

The staff are always friendly, knowledgeable, and eager to help. They are always well stocked with supplies and have smiles ready for every customer.

I had ordered 2 dozen moving blankets when I made my reservation online. However, these were not in the truck nor available at the pickup location when I arrived. I would have preferred to have been notified of this before arriving there to pick up the truck. However, the truck was nearly new and in great shape and the trailer was also in great condition so overall I was satisfied.

Not a thing. It was the best ever service. Thank you for helping s with our move.

Very friendly staff at the Office. Vehicle was fantastic and clean. Looking forward for the next rental with you.

I was not offered a receipt copy on site. I was told it would be sent to my email which it was. I dispute the additional charge for fuel As I replaced more fuel than I used. I could have disputed that on site and the idea opportunity.

Walking customer to vehicle/trailer. Took me a bit to figure out which trailer was mine, identified only by the OHIO license plate. Not very important but would be helpful.

The trailer had had the lock for the rear door cut off. I had to spend the time and money to go to Home Depot to fabricate a locking devise. Then we had to go to an automotive store to buy an adapter to make the lights work. Not happy customer

This was my final destination and Jamie was very friendly, knowledgeable and helpfull. I dropped the trailer off at JDMotors on the corner of Arlington and Wade Hampton Blvd first. They said to put it in an opening on the back of the lot, there was one open but no place for me to turn to back it in. So a guy came out and said put it in front of the Uhaul trucks and went back inside. He did not offer to help guide me while backing up. so after 20 minutes of trying to negotiate around their used cars i dropped it off. An hour later Jamie contacted me about the trailer, I told her i had dropped it off at JDMotors and she informed me it was not logged in. So after finishing moving my other property from a 10X15 storage locker into my new 10X30 I went back to JDMotors and they still had not logged it in so I told them I would be taking it to Storage Rental of America. Then a gentlemen came in and told me I needed to move the trailer from its current position. I told him I was taking it to a different site. He was very rude. If not for Jamie at Storage Rentals of America being so nice and friendly and appolgizing for something she has no control over UHAUL would of lost a potential customer. I have more furniture I need to move from my House in Concord NC that I am selling at the end of the month. I will be picking up a Uhaul from Concord and dropping it off with Jamie. It is my strong recomendation that you terminate doing bussiness with JDMotors.