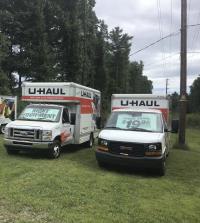 I had the best experience picking up my U-Haul cargo trailer. I showed up and did not realize it was not an official U-Haul facility as I was hoping to purchase a hitch there. However, I met Ed and his family and they went above and beyond to help me. Ed directed me to a tractor trailer supply store and told me the size hitch I needed and I went and purchased it. He then â€œre-engineeredâ€ it so that the trailer did not hang low to the ground. After he did that, he connected the wiring for the lights which weren't working on one side, so he re-wired it for me so that they would work. He and his family went above and beyond for me and I made it to my destination safe and without any complications at all. I truly appreciate them! Ed did not have to do what he did for me, but great people who give without expectation do that kind of thing for strangers. Thank you for everything!!!

One tire was extremely low on air. I had to call U=Haul road service to replace before I left my house. That cost me four hours of time.

I'm mad, I was responsible and dropped the Uhaul off the same day and Greenwich NY did not put it in their computer. I refuse to pay any extra, I will argue this!

It was very easy, but no signs out front, not very welcoming, and a bit disconcerting. People were helpful when I asked, but did not approach me to help.

The business was closed. I was told to just take the trailer but was later called by uhaul indicating that it was thought to be stolen. I didn't appreciate that at all.

I do not own a smart phone and was unable to complete the transaction online or on the phone. The little chop shop went owner opened specially to serve my needs. Exceptional service.

The communication between uhaul and the shop, I had to call the owner of the shop to get the keys for the truck because the shop was closed. The guy didn't even know someone was coming to get the truck

Location had no pads and no car trailer. Had to go to location 50 miles away to pick up car hauler But still no pads Uhaul needs to coordination equipment location better

The previous trailer that I rented on Saturday 11/2/19 had a flat tire it was repaired but I had to retention on 11/5/19 to complete my task.

The truck that I rented for stuff smelled and looked like people had been smoking in it. Second when reviewing my receipt the owner of this rental facility over charged me wrote down wrong mileage, charged me for gas when I returned the vehicle with the same if not more gas then was in it when I left. When trying to contact this gentleman he refuses to answer or return phone calls I am not pleased and was overcharged for using a U-Haul for a little over an hour double what I did two months ago at a different facility .

The gentlemen at the Greenwich location was very helpful however I reserved a 20' U-haul for 8/31/19 to be picked up at 9:00AM in Greenwich. When I arrived I was told that I was not even on his list. He called dispatch (I assume) and he was advised that the pick-up location had changed to Saratoga. He was told that U-haul tried to call and then sent a text message to my phone. I only have 1 phone and I did not get a call nor an email. As I was on a limited time schedule I was given a 15' truck. We had to make it work but if I have to use a moving truck company again I would not choose U-haul nor would I recommend to others due to the poor experience I had. This had nothing to do with the gentleman at The Little Chop Shop. None of this was his fault.

It was unfortunate that I couldn't access the internet from this location with my cellphone while returning the truck in order to submit my report online. But Ed, the owner, resolved everything and informed me that he would be able to insure all was good with my return and he would submit the data on my behalf - and he certainly did. I received a UHaul email in the morning denoting all the correct info for the return. Ed went above and beyond. I greatly appreciate all he did.

When someone reserves at 20â€ truck and go to pick it up and there are none available and I end up with a 15â€ truck . That's piss poor business I will not be using uhaul again this is the second time this has happened to me this willl be the last time.

Pickup here took a while due to the Uhaul system locking up but they did everything they could to help me including digging out a 2" ball hitch when I showed up with at 2 5/8 accidentally.

The Deihls ere wonderful to work with. Highly recommend this business.

Location was short 12 moving pads and did not correctly change the contract. Thus issues at check in but resolved finally

There was nothing wrong with this location. The owner was very helpful and accommodating. However U-haul in general was very confusing to work with. Made reservations on line for this location, and immediately got a call from Uhaul saying they couldn't guarantee a truck at this location(even though they had 4). They had to have me pick-up 15 miles away. Then the day before, they called to let me know I COULD get a truck here. Then my contract told me I had to drop off at the further location. After calling and chatting on line and 30 minutes on hold, a lady was finally able to correct our drop off location. Very stressful!!

Friendly and very accommodating - great place to do business

Great staff, very friendly and helpful. I'd recommend this location to anyone needing to rent.

Everything was good, would have preferred a Van but this location was closer so I chose the next size truck. Staff was friendly and competent and good to deal with.

The service was great and they were very friendly and helpful. They were a great representative of U-haul. I have used U-haul many times over the years and have never been dissatisfied. DLT