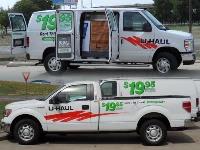 Discourage truck share. Pics , scan took over 30 mins to load. Truck blocked in. Dealer finally called me with an accent so thick I had to ask him to repeat several times which he told me that I AM NOT listening.

I made a reservation and it still took well over an hour to get the keys so I could leave. The employee, which is very nice, called Uhaul to get help on a question he had and the woman on the phone blew him off. It was extremely rude.

The location was fine. But I was charged for equipment I didn't receive. I was promised and paid for an appliance dolly and instead got a smaller dolly. And if it wasn't for the personnel there to help me checkout I would t have been able to get my truck due to confusion and a slow website.

Phone help making reservations was fantastic and the gentleman at the U-haul dealer was excellent! I rented the trailer, picked it up and was on my way in less than 45 minutes! And it took me 20 minutes to drive there! U-haul is the best and most convenient - Note: I went to Home Depot to rent a trailer initially and they insisted I had to rent the truck as well. Way too expensive and my F-350 Super duty could drag any Penske Truck down the road with ease!

Sales associate gets an A+

When pulling in, I wasn't totally sure about where to go or park but then saw the uhaul signs off to the left. Could be better marked up front. Employee was very nice and wore a mask and gloves while he checked me in outside which was appreciated.

Was not open but personnel did come to check in the trailer.

No one was there...no drop of instructions, only a key drop. No happy with no one being at this location because I wanted to make sure everything was good with the equipment. We had 24 pads and they were not even listed on the contract because the location in Athens just gave us the pad without putting them on the contract. We could have kept them and no one would have know, but we cleaned the truck, folded the pads and cleaned the hand-truck before returning the unit. We were not happy about leaving the unit without someone being there.

Don't charge people for an extra day. I returned the trailer on the 25th, but the invoice says that I returned it on the 26th.

The cab area was not very clean. Cup holders dirty, small pieces of trash or something in the passenger seat. Dirt inside the cargo area. Signs at the U-haul pickup point state that trucks are clean and must be returned clean, so that creates a higher expectation for the customer when they step inside the truck. The truck was not horrible, but when you say it will be clean, I was expecting that.

Check in employee came out in the rain and was very helpful.

The owners office location for this U-Haul was way in the back of a multi office building there was only two signs posted for the direction of where the location was it was very small and very cramped. I'm a very good driver however the owner of this location forced me to get insurance for $28 I didn't ask for insurance when I initially made my arrangements for this U-Haul when I did get to him he basically was not trying to let me leave with the truck without getting the insurance I was not trying to pay for the insurance but the art of forced me into getting the insurance instead of having another number or something to contact him at as soon as a business line he gave me his cell phone number to be able to text him a picture of the mileages and the gas on the truck. I will never ever refer anybody else to this location again I seen the complaints in the reviews from Google for this location before I picked up but since it was the closest one to my storage location and to get back on the highway I chose this location however I would never refer this location to anyone else that I know.

There was a cigarette butt in the glove box. Not a regular place to inspect, so I see how it was missed. Sure, I'd recommend the location, but I didn't see a fleet of trucks, just the one I rented. Maybe he pulled it around front for me? It was an unusual location physically, and had not been my first choice. The customer service was exceptional though.

Operator of the location was not present at time scheduled for pick-up. Added wait time of nearly 30 min.