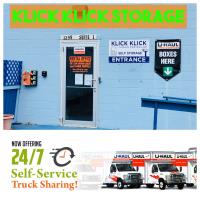 The drop-off process was done over the phone, but it worked.

After setting up our reservation and driving almost two hours to get there and once we did our self check in, our key was not available to us in the lock box. Since there was no one in the store we called both numbers provided to us. No one answered. We continued searching for the key, and found it in the drop box but no way to get inside of it because no one would return our calls. After one and a half hours of trying to figure this out and making more calls to corporate, we were finally able to arrange a different ride 10 minutes away. This was a horrible experience and we were not able to meet the timelines we needed that day because U-Haul services were not providing adequate customer care. I will definitely be sharing this with others.

Wiper blades were in poor shape, i even purchased new. The right front wheel bearing failed causing me to need roadside assistance and I lost 1 Full day of travel.

Did not feel safe picking up at a storage unit with staff not in uniform or an office.

Do not give to customer on 1/4 tank of fuel

There was nobody there , my truck that I had already paid for was not there, they had packing tape and stuff on a shelf out in the open for anyone to just come and grab without paying. The person never answered there their phone. I rented it for 4 and didnt get it till 5. Waited for the Regional manager to come and cut me a key just so I could use a truck. We got the truck and it had less then a half a tank of gas in it. By far the WORST location I've ever used.

Three times on Thursday they called to confirm my reservation. Available after 12. (never stated you must be there at 12 - available after 12 reservation confirmed) then on Friday when my arrived at 2:45 to pick it up he is advised our reservation was cancelled. NO PHONE CALL at all on Friday advising this. Not the finest pickup experience.

Nice guy but checking in very slow even though I had checked in and paid on line.

Rented for 2 days, charged for 3, no print out of contract.

Trailer lights did not work and I had to drive to the east side location to get them fixed.

Other than not being notified that the trailer was located at the VELP Avenue location and NOT the 700 Main Street location, where I originally showed up and was the location to which was indicated in the online contract. Nothing to speak of. When I asked Demontae January at the 700 Main Street location if the Velp location had other miscellaneous options (blankets, locks, etc) He did not know. Just better communication is needed. ALL personnel involved were very polite and professional.

we did not get a printout of our contract. He said he didn't have a printer. He wanted me to take screenshots I was having problems with my phone with the battery so I didn't get all this pictures of his computer screen. And when we did the drop-off it doesn't clearly state that you need to take pictures as you go. As I was having battery issues with my phone I ran around and cooked her pictures plug my phone into my car. And I thought I could upload the pictures. But no I couldn't.by the time I was supposed to take a picture and upload it. My husband had dropped the keys in the Dropbox so we couldn't get back into the cab to take a picture of the dash board. So I took a random picture of the back of the truck just so I can go on to the next step. I'm not happy with the overall experience.

Owners and employees are nearby. If you don't locate immediately when you go into the building, all you have to do is call them and they pop right in (multiple numbers are listed on the door). Friendly service and very helpful. They also offer storage space there. Thanks!

Old guy who just was slow didn't know how to work the computer nor could print a receipt.

Trailers should have wheeled dolly so customers don't have to lift it.

The personnel weren't there when we dropped off the truck and trailer. Also they only signed in the truck and didn't sign in the trailer even though it was attached to the truck. This made for some confusion and frustration days later!!

A bit small of a parking lot, so hard to judge a really good spot to park truck. Good location. Gas station nearby too

Easy to deal with. Had the drop off taken care off in record time. Wonderful personnel and service.

Klick Klick was very hard to find they need bigger signs! we were dropping off at night and we picked up from a different location and we couldn't find it.

Call me and I will explain

Check out was painfully slow--the person could barely type. I ended up typing in my email just to speed up the process. Then when he went to check me out, he lost the order and never could give me a copy of the contract. Had to call dispatch to get a copy of my contract emailed to me. I was getting a truck a trailer. We had to go to another location to get the trailer--it was not already hooked up. That took forever, and then when they put our car on, I felt that it wasn't done correctly. I stopped by another U-Haul in Green Bay and sure enough, the car was not properly chained down. Would never recommend this place!

The brake lights and a turn signal on trailer were not working. We were unable to have issue addressed at the rental facility. A second Uhaul location replaced the faulty part, which had been previously patched in multiple places. We received no response from Uhaul in our attempts to address this important safety concern! This was a terrible experience as the safety of the rented equipment appears to not of importance to the company!

Did online checkin then had to review all the same stuff at time of pickup. Took too long.