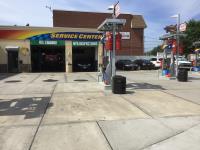 When we got to this location, which was on both our printed and email contracts, they had no available parking spaces and asked us if we were in the wrong place. We then showed them our printed receipt, and the location manager made a call to their parking lot attendant and informed us that we could park in a nearby lot and check out there. This was all fine. Then I went to check out on the app, and the app had our return location listed as a different lot in East New York - not the location on either of our contracts. I called Customer Service, and the service agent (wish I'd written down his name) told us that we were in the wrong location, and we couldn't return our van there. I explained that we were in the location on our contract, we'd already spoken with the location manager and figured it out, and we just needed a way to check out online. He continued to push back and tell me it was impossible. It went on, pointlessly, like this for about 20 minutes. Finally he told me I could return it there, but I would have to pay an additional after-hours fee (even though I was returning it three hours after we rented it), because I wouldn't be able to check out online. I said I wasn't going to do that, since I was returning the van on-time to the location in my contract. He said he would "put that in his notes," and hung up. I then went on the website just to see if I could figure out another way to check out that didn't involve being financially penalized for an automated app screwing up our information, and lo and behold, the web version of the check-out feature, unlike the app, still had our original return location, so I just did it there. Wasted an hour of my life arguing with a stranger in a parking lot in Queens. No complaints with the location - they were totally fine - but Customer Service/Corporate UHaul is a joke and a nightmare. Sticking to local businesses from now on.

The rental van was parked in an awkward spot where I had to inch out my parking space to avoid hitting a gas pump. The app wasn't working and took too long to give me a code for the pad lock box in order to retrieve the key. The app wasn't working to drop off the vehicle and had to call customer service to help me with this issue. A very long day indeed for a simple pick up and drop off procedure.

Explain the steps for remote pickup prior to pickup, so that time is not wasted going through those steps not being prepared.

Inside of the car was dirty. I waited almost 2 hours before I could access the key of the car. The on-site representative was missing and went on a personal errand, leaving me going around asking her mechanics. Very unprofessional location.

I had a rental for 9am. Went to the location and my reservation could not be found. Long story short I was on the phone with uhaul till almost 11am till they could fix there system. I was so frustrated and angry I wanted to cry. I was late to where I had to go and that coat me even more money because I couldn't get my rental at 9am because of uhaul and there website. I have never been more frustrated . Horrible experience.

It took be 50 minutes in the morning to get thw van. People who work there are misinformed about the â€žnew systemâ€... but I don't believe it's their fault. I understand that things are tougher now with the pandemic but maybe it would be better if at least one employee was from the Uhaul company. The girl tried to do her best but things were beyond her. The man was bery helpful with parking the car.

Have the people at the location be more customer service oriented and help the customer. They just do not care!

If you require a mobile device for a mobile pick up, then you should have your mobile system working. Or don't allow reservations before location opens. I had a 7:30 a.m. reservation and because your system was not working. I had to wait until the location opened to get my rental. I didn't leave till 8:30am.

It took over an hour to get my key and I couldn't drop off the truck without calling customer service. This is the worst experience I have ever had renting a truck and will not use Uhaul again.

The woman overcharged me. My return time was 6PM, I returned my vehicle at 5:57PM that day. She must work a 9-5 because she was already gone for the day when I returned the van. Her coworker ensured me that I could give him the keys and he would let her know I returned it on time. I took a photo of her coworker holding the labeled car key, I took a photo of the gas and mileage (all with the time/date of the photo obviously) AND I called uhaul before I even left the drop off location to let them know about the situation. The uhaul rep. said she left a note on my contract that I returned the keys on time. The lady must have came into work the next day at 9AM because at 9:14AM she said I returned the van! IN ADDITION TO THISâ€” I specifically told this woman I did not want the insurance. Well, she charged me for it anyway. AND charged me that amount again for the next day EVEN THOUGH I RETURNED MY VEHICLE ON TIME THE NIGHT BEFORE. So that's $40 overcharge fee plus $25 coverage (x2). Equaling almost $100 overcharge. Now I have to waste all my time on the phone with uhaul or this gas station woman!!! I don't even know which one to call it's gona take forever I know it and I'm furious.