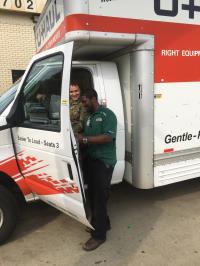 Get some hand sanitizer, and increase the timer on the hand towel dispenser. Takes way to long to reset to get that second tiny hand cloth/paper towel. Employees were very helpful and wore their masks. Thank you.

Staff did not wear masks.

Love the staff over here! I'm a frequent customer and they have been friendly, easy to work with and has came through every time.

The woman who was working there was professional and courteous. Make sure you keep her.

They did not comply with the promise they made

Had issues in the past to verify my id. Gentleman who worked at the location just didn't try to verify it and told me to call customer service cus the bar code didn't scan. You could tell it was the phone he was trying to scan with but he didn't even try any other option and just tried to push me out. When I called other worker scanned it with her phone and it worked just fine. Took me 2 hours and half just to get the keys.

Truck had a hole in the roof and my personal items got water damaged. Seems to be no inspection process before renting out a truck.

Have your people show up for work! This is the second location I had to go to because no one was there at my reservation on capital Boulevard. I was an hour late to my appointment because of this

If you offer insurance verbally it would be in best practice to offer roadside services also since towing is not covered under it otherwise you end up with a $100+ tow fee like I did if something happens when I should be included in insurance or at mentioned by employee like other extra services since they are not the same!

Neither the app nor the website worked for my digital pick-up or drop-off. Both times it said it didn't have permission to access my location (both the app and browser did have that access, however). When I picked the van up (after having to go in, wait for a staff member, give him all my cards and information all over again, even though I had taken the time to enter all that in online beforehand in order to avoid exactly that...), there were no photos stored on the website and the only instruction given was "go to the service desk". So again I went in, waited, and was told "Oh, just take some photos on your phone and you can go..." It felt very sketchy. Drop off was a similar case of technology not working, and staffers not being around. Ended up waiting inside, again, in order to turn in my keys. Very confusing and frustrating. Every precaution I had taken to not have to be inside the building for any length of time with people who may not have been properly wearing masks was futile.

Don't charge people $7.00 to rent a dolly that already comes on a truck. That should be free.

Both Lauren and the young man that helped with pickup were very courteous and professional. I have always been impressed with this location. I have used them several times and never been disappointed

The overall experience was a breeze and interaction with staff was great!

My wife thought the truck smelled. It got the job done though and she got a new fridge

My guy stayed texting on his phone wasn't very ingaging.

I wanted to report a specific incident I had at your Garner, NC location when I went to pick up a Uhaul at 9:00AM on Sunday, December 6. For starters, the young man who completed my check in was not wearing a mask. When asked why, he said "he hadn't had a chance to get one." It is currently December of a pandemic going on since March. When I insisted, he went to his car and magically found one. His partner that day came in while we were talking, he was also maskless. Worse, when I went outside to start my Uhaul, I realized I had some questions and this second young gentleman was outside (w/ a mask this time) and he was outright belligerent and hostile towards me simply asking specific questions about operating the van. He was not interested in providing any sort of simple customer service. His attitude was "Why are you asking me anything why are you bothering me?" It was pretty horrible and made me slightly fearful. When I returned the van later in the week with some apprehension, there was a different young man out front and he was very normal and polite and wearing a mask.

3 young employees...not very eager to help...neither was wearing a mandatory mask...equipment was not checked in from previous rental... damage inspection was not done before leaving location...

Sales associate was very pleasant and knowledgeable.....made the process smooth and quick

The original rental was scheduled at another location in Raleigh for 9:30 AM. When I got there the office was closed and didn't open until 10, however they only had a 10' truck when my rental was for a 26'. I called another Uhaul in Raleigh and they said they had one that I could pick up at 3. Then I got an email saying that they had to change the location, which is why I ended up getting it at this location. This is the second time in my last 2 rentals with Uhaul that the truck that was reserved wasn't available. Also, the delay from 9:30 to 3 made me have to change all packing arrangements and I lost a whole day of the move. Very poor track record.

Love this location! The staff is always friendly and accommodating. The owner is very nice and treats you like part of the family

The trailer was clean, but I found at the end of the trip that one tire was bald in the middle.