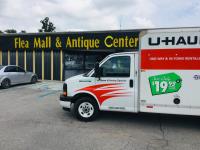 Not a thing! Jalen was very helpful and knowledgeable with the equipment. He was also very courteous.

I ordered extra equipment to help with our move and it wasn't in truck when we picked up . Off course it was a online order soo i called the 1-800 number and they stated the next area closest to me with the equipment I needed so I had to drive across cities for there waited in line forever just to finally get there and the young lady said she didn't have that in stock she doesn't know what they were talking about Over the ohone extremely frustrating I asked for more time to be given since I'm ruining up and down the road to get the things that should hsve already been in truck and they told me they couldn't extend it

There should be better communication between pick up and drop off locations and between people who work at the same locations. If I did not get an item on pick up that I was charged for as a customer I do not want to hear â€œI was not here when you picked upâ€. I'd like the customer service rep to at least try to reach the rep who was there to verify. The phone number for this location gave a busy tone so I wasted a drive there (as instructed by drop off location) to receive a refund for a dolly I did not receive.

The contract had the incorrect amount of gas. I had to get that corrected after starting the Uhaul to verify mileage and gas. After loading the Uhaul and getting on I-20, I noticed the left brake light and signal light was not working. I called the 800 number and held for 20 mins, then was told to call roadside assistant. I had someone to fix the problem because of my time schedule with movers. I couldn't waste any more time on the phone and waiting for roadside assistance. Uhaul should have been checked before renting to next customer.

This review is for the U-Haul main office, not this pickup location as management is up to the corporate offices. I reserved a truck, dolly, and moving blankets 1 month in advance 2 miles from where I live at 8am as I had scheduled others to help me. My reservation the Huntsville AL U-Haul office called me with a day before the move was at 10 am, and a 45 minute drive from where I live. The pickup location forgot to put my dolly in so I had to go back for it, and said they were out of moving blankets because U-Haul had not sent them any. Completely unacceptable. I'm not sure what the point in reserving a truck at a certain time and location a month in advance is if that equipment will not be there when the reservation comes. I have previously had good experiences with U-Haul but this was a huge let down and inconvenience. I will be using another company the next time I move.

Jalen was very helpful and professional. Thank you for your service!

Didn't have hand trucks that were supposed to be on order

Truck wasn't running right, nasty on inside has horrible Oder. Will not return as customers.

It was to far for me to drive to get it and bring it back, the back of it had people's stuff left in there and when someone ask if they bring it back a day early make sure they tell them if there is a certain time before they charge u. If I had known I had to have it back by 10 the day before I was suppose to return it then I would have just kept it until then.

The â€œdrop boxâ€ is nowhere to be found. I dropped the truck off after hours and even called uhaul on what to do. After leaving the cars in the truck and leaving it unlocked I basically just had to leave it there and hope someone didn't steal it. It is insane that this location does not have a drop box at the main entrance or anywhere else that can easily be found.

Mileage was wrong and now I'm being charged for it after I called and was told to not worry that I wouldn't be charged for it. Also didn't have the equipment I requested.

The uhaul computer system was down so it took an hour to process paperwork, but this was not the on-site person's problem. It was a uhaul website issue

Mileage was off on the truck at pick up. Flea mall more keeps trying to charge my card even though I called customer service and they corrected the mileage supposedly. Im owed $13 according to the miles I actually used.

The customer service was fantastic

Customer service could have been better

Again, this was a flea mall, selling used goods. Not a Uhaul business at all. The gentleman took the key and asked if I needed a receipt. I said no and left, hoping everything would be okay. Again, left me uneasy.

Guy at counter very slow. Didn't seem to know what he was doing.

Had to return to get pads that were left out of truck. Not a big deal, but that kept it from being excellent

I was very disappointed that my preferred location and time was not honored. If I had not come back in town early and arrange pick up on Sunday instead of Monday, I would have had to drive 20 miles out of the way and wait 2 hours to pick up the truck. This is unacceptable. When I make a reservation 3 weeks in advance, I expect to pick up where I requested and the time I requested.

The location was in the process of closing when we arrived. We were handed a key and then left on our own. We tried the key in several trucks until we determined which one the key would open and start. When we came out to try to start the truck again, it wouldn't crank. We called the appropriate service to assist us, and they told us that we had picked up the wrong van. I am unsure how a key would unlock and start a truck that it was not supposed to unlock and or start. But it cost us one day on our moving. Had we been told how to determine which truck to go to, or walked out to the truck, it would have been very helpful.

Nice big open lot. Easy to drop off the trailer.