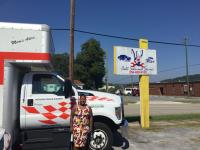 I talked with the district manager and she was very nice and helpful.

No one there. Had to wait. Did transaction by phone. We someone did get there was given 6 blankets not 12 and was given keys. Had to figure out truck myself. It was raining very heavily. Found out truck was leaking water inside and could not load truck until next day when rain was over. Had to use wet vac to get water out. Lost a full day. Would have tried to trade truck but all uhaul places near us was closed.

I was overcharged mileage...still waiting on the credit three days later. I shouldn't have to be hasseled with disputing mileage and following up so I'm not over charged $30

Staff was very helpful and friendly.

Nothing everything was great and good and friendly service

Well let's get started. I dropped the tow dolly off in Spartanburg like I told the lady where I picked it up that is where I was taking it to. I dropped it of on Sunday the 3rd of march as I was supposed to do. I get an email from the U-Haul dealer in Spartanburg SC saying I was being charged an extra day. So I called them and they told me that I would be reimbursed and would get an email confirming this. I got an email that only said I had a zero balance and not a word of the reimbursement. Well I promise you I will be calling again in morni g and somebody is gonna hear about this and it probably won't be a nice conversation. I work hard for my money and have somebody take it like that just not gonna happen. Not tonight or any other time. Now that is how I feel about U-Haul.

Smoke alarm was chirping because there was no battery. Furniture was piled and filled the entire room. It was dirty. I called at least 1 hour ahead of time to notify them I would be 15 minutes late Due to a traffic accident, and no one answered and they had no voicemail set up. I got a call while I was on the way to drop it off and the girl gave me attitude, but agreed to wait until 15 minutes after scheduled drop off time. When we got there 15 minutes right on the dot, she had already left and locked the door with no one there to cover the business. We waited in the car in the parking lot for 45 minutes before she drove up and offered no apologies for leaving earlier than the agreed upon time. She was not rude in person, but the experience of picking up a Uhaul trailer was radically different to my past experience.

Nothing she was very nice and helpful.

Oil light was on the whole time...was afraid the truck was going to burn up.The milage wasn't checked..or the fuel level.Was told the truck was had a full tank when you pick up.The truck had 1/2 tank of gas when I got in the truck. No one was there when I returned the truck to check milage fuel etc.I picked up a piece of furniture local.. pretty sure I didn't travel 25 miles. I rented the truck at 10am & returnedbit around 12

Having more varieties of vehicles

I have no complaints everything was fine. This is my second time using them and I will use them again. I would very much highly recommend them.

I had to repair the drivers side fender on the car transport trailer. The fender tilts out to allow the vehicle door to open. Nothing was holding the rear of the fender on. The main bolt at the pivot point of the trailer was missing and the bungee style strap that keeps the fender from tilting was missing

The AC stopped working an hour after I left Alabama, I called the roadside assistance number and couldn't give them an address, since I was driving, and they couldn't tell me what exit to get off. Also I don't think that they felt no AC ,was that big of a deal. Well, it was miserable, a 6-7 hour drive, took me just under 12 hours, I had to keep stopping so, my dog and I could cool off outside the truck. When I was sweeping out the truck, I found a lot of leaves and sticks, none of my stuff was on the ground that got loaded, so the person who rented it before me must not have cleaned up after themselves.

I I freakin love Shay and almost hated to move now that I've found her. She was so friendly and easy to work with.

Love Boss Lady she is fantastic and very friendly.

The truck ran well but the check engine light was on and should be checked.

Shay at J&J Auto was great! She went over and above to help me.

The lady you have working there is awesome and very helpful.