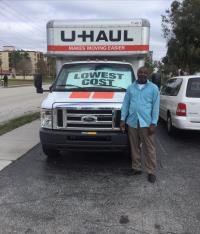 It was close and convenient but had to wait15 minutes for them to show up with keys (& I had opted for the contactless pick up) and facility that it was out of was not the cleanest. Truck was well maintained however do not think it was sanitized from last user to when we rented.

I am a little disappointed because I was called by a representative and she said that I was only going to be charged 59 cents a mile due to having to go way out of my way to pick up my rental and I was charged 69 cents. Also the place that I dropped off the van didn't have a drop box and I was forced to make a second trip early the next morning to return the keys.

Uhaul changed my drop off to henrys which does not have a drop box. Spent almost an hour on phone with no help from customer service. I was told manager was on vacation for a week so no one could make decision. Ridiculous

Nothing, everything was PERFECT!!! I plan to rent from this location again in the near future. Thanks!!!

The place was a small grocery store but the owner was very pleasant. I would not recommend u haul to anyone not will I use them again.

The truck had the worst ride of my life. We damaged furniture because it shook so incredibly hard above 10mph. It was awful. The truck needs new tires and a new alignment.

No improvement needed. Henry is a wonderful man to deal with.

Such great service and nice people! Definitely will consider again for my next move... hopefully not too soon! Thanks for all the smiles and for making my moving day easy!!

I am really disappointed with something happening whit the payment process...something what I decline to pay was charged, and now no one is going to take care about it.

Drug ridden area. There is no drop off box. We sat there for 2 hours in the dead of night to drop off a truck where we witnessed prostitution, a drug deal, and a drug addict approched us asking us for change and when we told hkm we had nothing he demanded we take him to the store to get a beer. The â€œownerâ€ Kenneth (whom of which is nothing but the district manager) refused to rectify the situation. We weren't asking for our money back at all. A simple apology and a solution to fix the location drop off to make it safer for after hours would've been compensation enough. But he jumped to conclusions and told me â€œwe're not giving you a refundâ€ when in fact nothing of the sort was mentioned. This drop off location is in one of the worst parts of Ft. Myers and I recommended if you're dropping off at this location, make sure you do it when the sun is out. I will most likely never use this company again. Sad, bc anytime we've ever moved or had friends move, we always went with uhaul bc of the customer service.

Mr Henry was very helpful and a pleasure to deal with.

Confusion amongst proprietor and customer service phone staff regarding procedure with checking in a late reservation. Time consuming and bothersome.Required 2 forms of state issued ID, never have I had to meet this requirement. Why me? Very offputting experience.

I returned the van early, and still got charge for a whole other day.

I was supposed to pick it up at a uhaul vendor near my house and where I had my load in a self storage. On the day before I got a call that the pick up was changed and when I got there it was in a very seedy part of town and was nothing but a 7-11 type store. Also the price was higher that originally quoted when I placed my order at my storage unit. Very disconcerting

1) The only person who can run the U-Haul computer was not there, even though I had a reservation. They showed up 30 minutes later. 2) The vehicle they gave me needs an alignment, it was veering to the right the whole drive.

The pick up location was a make ethnic grocery store. The owner was busy running his store and we had to wait for him to for quite a while. I asked him to let me take the truck without the trailer attached so that we could load the furniture first and he acted like it was a bit imposition for him stating he was afraid someone would steal the trailer. Then when we were ready to hook up the trailer and load my car, he stated we could do it ourselves. I told him I had no idea how to load the car and secure it for travel. we had to wait an hour for him to help because once again he was running his store and was very unhappy that he had to close it to come help us. He eventually came to help us secure the car to the trailer. After the first 300 miles, the tire straps had come completely off on both sides because he did not secure them properly. Very unprofessional business in a bad part of town. I would have rather been referred to an actual U-Haul business instead of this shady grocery store operation.

When I picked up the truck I was charged an extra $28 dollars for extra insurance in which I did not add myself. Once I notice the additional charged I ask for a refund of the $28 however, the employee told me that he could not refund me the money and I would have to call the regional headquarters. So I called the regional headquarters and they told me I would have to talk to the store manager. I picked up the rental on 8/19/18 and returned it the same day. Today is now 9/6/18 and I've been calling uhaul weekly about my refund and I've yet to get it back needless to say they've been giving me the run around. I would not advise renting from this location as he charged the additional insurance to my car without my authorization.

I drove 14 hours with a broken passenger side window and I have yet to hear back from my complaint. I would talk to someone about it but it keeps telling me to complete these surveys so I guess I will continue sending them. Guess need to get a lawyer and take care of it that way

It's a little different, because it's really a small grocery store and the man also rents out the U-Haul trucks. He's a very friendly man. The location was convenient for me and Henry was helpful and got me the truck I reserved. Everything went fine.

We set up our pickup for 6:00 at another location but I assume we were rerouted to this one based on the size we needed. The guy calls and asks if we can pick up at 5:00 because he closes then. We work until 5:30 - which is why we needed a 6:00 pick up. If these places aren't open until 6:00 then don't offer that time as a pickup to customers.

The truck was a piece of junk. Filthy and beat up. Exhaust leaked. Front end shook. Went about 180 miles and used 30 gallons of gas, while trying to keep the "green gauge", in the green. You do the math. Not acceptable by today's standards.

Truck only had a half tank of gas which meant that we had to stop and fill up before we could go to our destination which was over 120 miles away. AFTER SPENDING $60 ON GAS TO FILL UP THE TANK, we only used a quarter of a tank. Therefore, it cost us an additional $30 which we didn't need to spend!!!!!!! Henry's Multi Service is a grocery store. It was farther away from my home and not where I wanted to pick up the truck. Since we only moved half of our belongings, we will be needing another truck next month. I am hoping that our next experience is something that I can report is excellent.