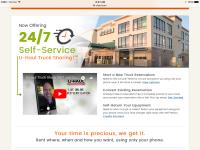 Information that was already provided in the online reservation had to be re-entered at the pickup location. It took a while.

I did notice the ABS light came on. I didn't know who to contact about that. When I turned the truck in I dropped it off and left the key in the drop box, so I was not able to tell anyone about the light. Other than that everything went well.

Used after hrs drop off but could have sent me to a closer location. Was about 12 miles farther then Cannan NH location and cost me to pay extra miles for going over my given miles.

Nothing to rate, no one was there and it was way out of the way of Lebanon, NH which we requested.

Extremely disappointing experience with Uhaul. I have used Uhaul numerous times and have never had as many issues as I had with this current reservation. We made our reservation a month + in advance and yet they kept jerking us around with not having the truck we needed, not having the rentable plastic moving totes in stock, etc. The truck size and pick up location was changed THREE times before we were able to secure the truck we needed but still had to drive to a further location to get the truck. Uhaul also forgot to give us a contract or any other information, so when we returned the truck they had ZERO record of us even having the truck. This is pretty concerning since if we hadn't of returned the truck in good condition and on time (like we did), your company would have no clue where the truck was and would be unable to track it down. The list goes on with the issues we had with Uhaul, it is just an excessive amount of information to type, so if someone at corporate would be interested in hearing more about our experience I'd be happy to chat with them. I should add that Lebanon Uhaul location had excellent customer service and was wonderful to work with (both Amy and manager Michel), but the traffic control center or corporate that we worked with was extremely disappointing.

The man behind the desk seemed unsure of what he was doing. I asked for AAA discount and then he tried inputting the AAA card number in the credit card machine and wondered why the payment number was invalid. He might need a little more training.

There was a slight issue with the amount charged, but it was quickly resolved. I would highly recommend this location.

Parking at this location was limited.

I was charged a $10.79 credit card payment fee which I found outrageous especially since I returned it with cash-in-hand but was told by the person there that they didn't know how to do returns so I wasn't able to. Peg Howard contract # 24309266

Fix the driver's side mirror so it can be adjustable. It is stuck, and does not move inwards.

I fastened the trailer to my vehicle myself. The tightening screw was rusted and locked in place. they had no adapter for the trailer hit to connect the electric I drove with a loosely attached trailer to an auto parts store and purchased the necessary adapter and WD40 so I could tighten the trailer down. I had requested 60 moving blankets. received 45

The guy kept telling me i had to bring it back because he had another person that needed it when i got one way and i explained thats what i was doing and he kept asking me what he was going to do about the other rental and honestly it wasnt my problem i did not think it was right to come at me about the issue he shud have called uhaul about it. Also not computer illiterate he couldnt even print out my contract and i didnt feel right leaving without it was afraid i would be in trouble and hoping i didnt need to do anything else.

Would have liked to have had gas in the truck. Gas light came on immediately after leaving the facility when I picked up the truck. Other than that, I was completely satisfied with the facility!

They were patient and kind. They also improvised when the computer crashed so I could carry on with my busy day.

Quick & efficient with pickup & dropoff, and they were even willing to reposition Uhaul for safer road access.

I rented the truck Saturday to be returned Sunday and was charged for a 2 day rental. We returned it Saturday but there was no one there to check it in. I left the key and contract in the after hours drop box. I had an online chat with U-Haul Saturday afternoon and was told the truck would be checked in on Sunday when they opened at 8:00 AM and I would only be charged for 1 day instead of 2. I asked the person with whom I was chatting if the location was even open on Sunday and they confirmed it would be opened. On Sunday, I drove to the location and they were closed. The truck was not checked in until Monday and I was charged for 2 days. I want the second day refunded.

This locations computer interface with the main reservation system had problems. These problems led to the truck I was reserving being double booked. In the long run they worked it out for me. The location staff is great. It is wonderful to have a location right in town. It helps to keep mileage charges down.

Very convenient for me given where the house is located.