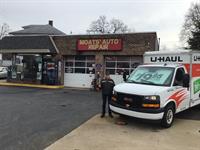 Nothing could be better. Everything was good.

I was very impressed with this location. They were helpful, courteous, prompt. Highly recommend!

Location was fine but the check-in process through the app took a VERY long time,

Keep doing what you're doing!

When I arrived the secretary that handles the U-Haul reservations wasn't there even tho I had an appointment to pick it up at 1:30 sharp. She eventually called in at 1:50 and said that she would not be back for 40 minutes and go download the app to get the keys. The cell reception at the location was terrible so the app was not loading correctly and I had to place my information in several times on pick up and drop off. She was not apologetic at all for her tardiness and was rude to me when I complained. I was 35 minutes late to pick up my furniture at the store and was 50 minutes late to work because of this. I would suggest that this location get stripped of their privledges because it was the worst experience I have ever had. Made for a very stressful day!

Everything was perfect and many thanks to the employees at Moats Auto!

Like new U-Haul everything was great renting thanks Moats

I was glad that I confirmed pick up time for my rental in person since reserving it online because no one was going to be there until 1 hour later. Otherwise it was a quick and easy process. Two employees that I encountered were very friendly and gave me superb customer service.

i was disappointed. I called and had the truck reserved for 830. I received a text confirming the 8.30. I received a second call this time changing from a pick up to a van. no problem as I was moving a kitchen stove. Then I was told that the station did not open until 10. I was expecting the whole move to take two hours and now I was going to be 1.5 hours late getting started. In addition I had obtained a little help that was coming early then planning activities in the afternoon. They had two small children. they had been promised to go to a local fair.. The gentleman at the station was a kind possibly retired gentleman doing a little to keep himself busy but he hadn't a clue I was coming or what to do other than call George. He had trouble with the copier. there was something else we couldn't find. he wasn't sure what I needed to sign. The documents should have been prepared for him. other wise a nice experience.

was very happy with the results from moats auto . Nichole was a help . I was in a real bind due to problems from another co. also the first u hall i went to did not have a great experience. The person was very rude I walked out and told him i would go somewhere else. this where nichole comes in . She made a stressful time for me a happy person. Nichole turned a bad situation into a good one . I hope thats she is rewarded for her kindness. she went out of her way. thank you .

Great experience ! ! Thank you very much

The only thing I didn't like was that there was not someone to check the uhaul back in when I was returning it. There was just a gas attendant. I sort of had to force him to go to the uhaul to validate the number of miles driven and gas in the truck in order to ensure that I was charged correctly. It seemed like that was not something he normally did. Overall, though, it was a very nice and easily accessible place.

New vans are excellent. Side doors saved a ton of work. Love not climbing up and down a ramp all day.

Have someone who knows how to complete the reservation. He did not know what he was doing. Also, this site has a full-service gas station so he left several times in the middle of our transaction to wait on customers. He just left....didn't say where he was going or anything. Bad experience. I will not rent from Moats Auto Repair again.

It was the fastest and nices experience i have had getting an u-Haul truck! Thanks

Service and communication was great at this location. In the past I ran into issues but this location is the best thus far. I will be a repeat customer.

This couldn't have gone smoother. PERFECT U-Haul experience. Thanks Moats!!!

Dave, you uhaul rep. was new and inexperienced..It took him 3 hrs to do the paperwork..he kept making mistakes..then the truck was locked in the snow and ice. Dave gave me a shovel, and it took me another 2 hrs to get truck unstuck..then, i alone hooked the auto transport up..no help from Dave..people were in the tiny office in line and mad as hell..All my help to load the truck had left me, because it took 5 hrs to get the truck..I had to load it myself..then was a day late and charged for it..deducted from my deposit..why should i pay uhaul for my labor in digging out the truck..being late because my help left due to the fact that it took dave 3hours to do the paper and then 2 hours to dig the truck out..This old 62 yr old disabled vietnam veteran is mad as hell..and when I go to the VFW here my war buddies are going to know about it. Charles Hawkins retired U.S. Army..1507 17th ave east hibbing mn 55746..dave even had my address wrong on the paperwork which he did 4 times, and had to call your main office for instructions. (218)565-2985

Small dirty looking hotel - but it did the job and the guy was nice.

The motel "lobby" was dirty and uninviting. We waited over half an hour for the clerk to figure out his printer etc. to get our receipt & paperwork. And, we requested a dolly, which we did not receive. Friday, after we loaded the Uhaul to leave Superior, it would not start and set our time back another hour trying to jump it.

chargE too mucH pER milE