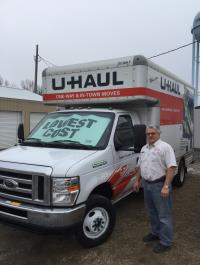 Train staff on computers and maintain the equipment.

Outside of truck was dirty on picking up. Why am I being charged for that? Also, there was a bag of popcorn spilt under the seats, which was not from me, but I cleaned up.

The movers I would not recommend, they did not use the blankets to wrap my furniture and there's black spots all over my couches

Ron Vasek went out of his way to accommodate me

I was very delayed because the tail lights were not working and they were unable to fix. THEY SENT ME TO ANOTHER LOCATION WITH THE TRAILER TO GET IT FIXED! LIKE IT WAS MY FAULT THE EQUIPMENT WASNT READY!!! I made these reservations 3 months in advance! I was sent on the road in an unsafe manner! When I arrived at the second location the attendant gave me an attitude like I was an inconvenience to them! Excuse me, if anyone is an inconvenience on my moving day it was this whole operation! I'm then down the road on the highway I find the back tire only had 10lbs of pressure!!! Again shouldn't have been my problem! After I returned my trailer I was called hours later by the company reminding me to drop off the trailer! I told them I did that hours ago! Worst experience yet! I will find a competitor in the future! Not happy about what I paid for the poor experience!

Don't let them rent from the company in Crookston. They wanted $144.00 + tax for a truck that would have been $29;99 in Grand Forks. The owner of spare husband, spare wife was absolute wonderful to deal with and found us a trailer even though he was out, to move our handicapped daughter. I would recommend him to anyone, He was great.

Make sure your trucks are properly maintained and SAFE to drive!

The staff member called and said he was going to close in 40 minutes due to a sick grandchild so I wasn't impressed with the integrity of the store. I also had insurance added to the contract that I DID NOT want and was a hassle to get my money refunded.

Trailer was not cleaned. Nut to tighten hitch was bent. Personal at drop off location had to use a hammer and large wrench to loosen to remove trailer

U-Haul dealer went out of his way to make a last minute car trailer rental happen. THANK YOU!!!!

I was told that I was able to keep it as long as I needed and had been told I wouldn't be charged for It because the first day I had it, there was a blackout and was unable to load, the second day I had to work and the third day it was raining all day and night. I only actually got 1 day to really use the uhaul which is why they told me not to worry about it. Other than that issue, everything was great

This place was closed on Saturday.

Very very upset, they called in less then 24 hours and asked for me to return the triler when I was to have it for 3 days.

My original reservation was for a different location- in Grand Forks, ND. I received a phone call and was told that due to the holiday, the trailer would need to be picked up a day early because they would be closed on Saturday. I made arrangements for someone else from the area to pick it up on Friday. When they got there they were told that the trailer was actually located in East Grand Forks. Then when got to East Grand Forks, they were not able to pick it up either because the hitch was too small. Ok. Fair enough. Then they were told that it would be located outside and we could just pick it up on Saturday. There was a lot of unnecessary confusion added to an already stressful day/weekend due to it not being located at the original location. It is understandable that it was a holiday, and that places weren't open. My main complaint is that it was not made clear that it was not going to be at the original location and that after all the running around, we were able to pick it up anyway on the day we originally planned at a different location even though they were "closed". The trailer was outside unattended and thankfully there when we arrived.

Provide some sort of service.

The man was rude and the equipment was faulty. He also did not help us load our car on the trailer. He just showed us where it was and LEFT. We did not know how to load it ourselves and had to wait for help, which made us an hour late. Terrible service, would never recommend this location.

Very Nice Friendly guy! Will go there again & recommend them!

filling out required information could be more user friendly

Let Sam take care of all the rentals the Sam helped me set it all up and when I came to get it the guy I had to go through was an idiot but Sam was came to take care of everything! That guys really deserves more!

Everything went fine, the service was wonderful

Tried to drop key in uhaul drop box due to office reps were not in when dropped cargo van before designated drop time w/fuel at required amt & under estimated mileage but the only part of the key that even fits in the slot is the tag the key attachs to the drop slots for uhaul box is far to small to actually fit the ignition key lock fob. Luckily the entrance door to the office had a mail slot (which isn't necessarily the secure) so I put the key through slot where it dropped into a bin as I didn't want to be late w/drop off. I attempted to stop by the office 3 times after rented the van throughout the week (at different times) to confirm key was received but still no one was there each time. I also called due to charge had not shown up on my card & the rep at the office quoted me more than what the contract was even when we estimated 30 miles but only used 21 miles & we left the tank at 1/2 a tank versus contract required amt of 3/8 a tank. Was disappointed w/the key issue due to if company allows for keys to be dropped in a uhual key drop box the slots should be big enough to fit all sizes of ignition keys/lock fob & that I was over quoted from the contracted estimate I signed. I can understand if I went over miles & did leave gas where required but we made sure to follow what we signed. I will think twice renting from uhual again especially when I'm looking to move next summer & I rented this van to help a friend move their stuff to their apt from my garage. It is stressful enough to move & I don't want the same Hassel again.