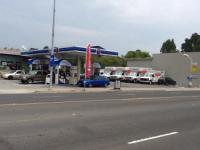 Customer service at this location was terrible. It is attached to a gas station so there is a lot of things going on. My time was pushed back an hour. They didn't have the dolly I reserved and told there weren't any dollys available. My sister found one in the parking lot and I had to wait 15 mins for the woman to find the key to unlock it. They didn't have the furniture pads either. I reserved my equipment well in advance so it baffles me that nothing was there.Then I was told if I wasn't back by the time the gas station closed I would be charged extra even though my time was pushed back by uhaul. It was just very unprofessional and the customer service was very poor. Everyone there had a terrible attitude. I will never rent from here again. Moving is already a stressful time you don't need the added headache.

Cheaper rate given at the beginning and higher rate applied at thr time of return . Straight up cheating, wont recommend that location to anyone .

It was a small older gas station. The young person who helped me was OK , but as she had other duties it was just a little strange.

The El Sobrante location was not the problem, the problem I had was with the Vallejo location on Solano as this was where I thought I was supposed to pick up the truck, from there things went downhill someone dropped the ball. I got to the Solano location 5 min before opening to only find out that my pickup site was in El Sobrante. I dont have a problem with the El Sorbrante because the customer service was good and wasnt their fault. Who ever processed my reservations was at fault and I didn't appreciate the run around that I was given by this company. I was never told of my location of pick up until the day of. The pick up location didn't have my dollies or blankets that I requested so I had to drive back to the Vallejo location to get them and they still didn't have the blankets. then I was overcharged after I dropped off the truck for unexplained expenses. I will never ever use Uhaul ever again. One other issue I had was that I requested moving help and they never showed up or contacted me such poor service.

I feel like I paid way too much for a 2 hour trip. Only went a total or 30 miles if that

I've picked up at other locations before and always had great service and no issues. This location is the worst. I was quoted one thing on my reservation online and when I got there the man at the register charged me far more and was not happy that I "interrupted" their normal business which is a gas station. I won't be back. I'll pick up at my usual location next time far in advanced. Only reason we came here is because everyone else was out of the van we needed.

The fuel was incorrect in the system & the mileage was wrong.

The Chevy pick up was wonderful! The seats are so comfortable for the long drive to Sacramento! GREAT Truck! THANK YOU!!! You are my go to place for rentals!

Upon arrival to the location, I was told the truck that I had reserved two days prior was quote â€œunavailableâ€ for having been â€œreturned without a keyâ€. This struck me as confusing, so I called to have my reservation moved. After slight investigation from associate â€œSusanâ€ over the phone, we found that â€œSeanâ€ was the area field manager and could have a key brought down. We were unable to reach Sean, after two attempts at contacting him. Upon further investigation, an unnamed man arrived at the location and was able to access the store through a service garage in the rear. He then, suspiciously out of my sight, â€œfoundâ€ the key in the back. After this, the store clerk â€œHarryâ€ was rude, short, and insensitive to the inconvenience their negligence caused me.

The truck was dirty. The attendant was unprofessional. We did not get everything we reserved. UHaul made every possible mistake it could have made.

I ordered a dolly online and was under the impression that it would be placed in the cargo van. I was charged for it and it was not in the van when I arrived at my moving location. On my return I asked for a refund and was told that it was my job to ensure the dolly was with the van and no refund was given.

When I before I returned the truck, I put gas in it. When the person checked it, he said it was not at the same gage as before I left. The amount of gas I put in went over the amount that was in the before I left the store. I drove 35 miles and I put ten dollars worth of gas in the truck. (3.72 gallons of gas) That was more than enough. I had the same problem on a previous rental. I was charged for an extra 1.5 gallons of gas. I am not satisfied with how this turned out.

I was charged for refueling when I spent my own money at this location's on-site gas station. I was also charged for a cleaning fee. I took the time out and removed the bed liner from the van and washed it down because it had dust on it, but was still charged a cleaning fee. What a crook. Beware: during this social distancing, businesses are trying to do no-contact options. Make sure you take photos before and after because it appears some companies are trying to make a quick buck off the situation.

Place was understaffed. It was odd to finish reservation while staff was attending to customers. Normally this is okay. But with Covid19, it made me uneasy to have staff go back on forth with customers.

The gas stations representative was not helpful and rude for no explanation. I arrived there at 8:10, asking for a rental he stated that he has no vehicles available. Send me to another location down the street. There at the another location the representative was wonderful and was able to make a reservation, unfortunately it was back at the original location where I first went to. Harry ( at original location ) didn't even apologize for the inconvenience and waste of time. Please train your staff on proper customer service.

The two gentlemen in the gas station are AWESOME!

Clean the inside out and sanitize. Still had the smell and boot tracking of horse manure. Other than that it was an excellent experience as far as rental companies go. Very courteous and efficient.

Vehicle we reserved was not available on date and time specified on contract. Upon arrival, check in took 10 minutes longer than normal. We had to use a smaller vehicle than we agreed to. The vehicle we used pulled hard to the right, had no light in the box, and no ramp. Both staff I spoke with were very pleasant.

Customer service is great, i never had that good experience any another location . Hope al the uhaul locations had employ like 3753 San pablo dam rd . El sobrante . UHAUL / ARCO