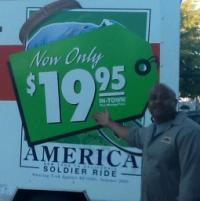 Due to COVID precautions we placed the keys and paperwork in the specified return box outside, which is why I selected N/A for that question. Drop off was quick and easy and very convenient.

the entire process was awful.

I had to go to 3 different locations to pick up my Uhaul even though I had a reservation and wasn't informed until day of.

My key was not available when i showed up to the site to check out the car. It took me an hour on the phone with uhaul ( after the hung the phone up on me) and still did not get anything done. The manager of the property that left when i arrived showed up later asking what we was doing. and ended up going inside and getting the key for us. i was almost late to get my things out of storage and i was late on my travel to Jacksonville.

Customer Service at pickup location was phenomenal. If I was CEO of U-Haul I would put this gentleman in charge!

Check the equipment before renting it

I laugh the whole time I was there, the owner gave me great customer service and the whole experience was like none other. Even with the computer moving slow he made it enjoyable to wait. Thank you sir and I say sir because I don't remember his name but I do remember his voice and how you gave great customer service. Only if every interaction I would have in other places was be like this, I would be in heaven. If I was able to bottle him up and pour him in everybody's Kool-Aid to drink I would and the world would be a better place.

Friendly staff. Would definitely recommend to other humans

We returned out equipment at 8:30am but the equipment was not checked in until 1:27pm which added a 1 day charge to our rental. I called the store location and the gentleman that answered the phone was extremely rude. He cut me off mid sentence and said he could not do anything about my contract with uhaul and that I needed to call them. When I tried to explain that it was an issue with the time the rental was checked in he said "what don't you understand?!" and then hangs up on me. He was extremely rude. I called u-haul and they did in fact confirm that this was an error on the store side and it was checked in late by the employee and a refund is being issued. I have worked customer service for many years and that man should never be allowed to answer that phone ever again.

I'm gradually moving away from your company. I've changrd my storage from a facility you guys manage, I'm currently sitting in a one-way Penske, which represents an attempt to completely say goodbye to your company.

Nothing. Everything was A1

The location itself wasn't clean. The staff didn't appear to have knowledge of the computer system. They also couldn't figure out how to attach the break lights from the trailer to my car, so after a few minutes of trying said â€œI can't figure out the lights so just go up the street to the other uhaulâ€. Then when I speak with the â€œotherâ€ uhaul, they tell me that they can't help me and that I need to call roadside assistance. I needed to get my stuff loaded up and on the road and this extended my trip by hours. I felt really insulted and unimportant after paying good money for a service that I'm the past has been great. I was and am extremely unhappy.

The confirmation email I received upon completing my reservation provided a different pick-up location. Upon arrival at the Memorial Dr. location the Uhal rental was closed even tho it was past the specified opening time of 8am. Also, the location didn't have any trucks. I ended up calling Customer Service and a representative send me to the Candler location. The Candler location didn't have the 17' truck I reserved, instead the only truck they had was a 26'. I ended up completing the move, but the process of getting to the correct location and picking up a different than ordered truck was frustrating.

My reservation was for 8:00 am, at another location. They didn't open until 9 and then claimed that my reservation wasn't there even though I had a email stating the opposite. No one answered the phone at customer service. Terrible! I will avoid using uhaul in future.

Not all of the reps were courteous. The guy who actually gave me the keys was great (sorry I can't recall his name). Also, one of your reps at the 1-800 number was semi rude (impatient) when I didn't understand something. It's like your people think we're forced to use you so they don't have to make it a topnotch experience for the customer

This location checked in my wrong trailer without telling me anything went wrong. Seems like they would have noticed and told me. I found out when U Haul sent me an email saying my trailer was overdue.