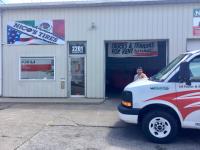 They didnt take a picture of the mileage before I left and just charged me what they wanted and i.didnt even have the uhaul for 2 hours then charge me 58.25 when the rental. Was only 19.95 never rent from there again I feel they owe me credit..

Quick friendly service! Paperwork, hooked and on the road in a flash!

There had been an ice storm a few days before and the truck clearly had not been cleaned off and the parking lot was so icy we could barely walk to the truck.

Tell them the full price!!!

We scheduled in store pick up. When we got to the location, the location was closed and lights were off. We called the store, no answer. We called customer service and they said there wasn't too much to do besides download an app. We didn't have any information for the app pick up. We waited an hour to get the vehicle. We were of course moving that day so it threw all of our plans out of the window. The guy answered after the 5th call. He showed up to the place an hour after and was grumpy and rude. Almost like he was upset we were making him actually do his job. Never apologized or anything either. Vehicle worked well and was fine. Just very disappointed with customer service. Worst experience ever. Absolutely never going to that location ever again.

I originally was supposed to pick up my uhaul at 9am at the west Kimberly location in Davenport, IA on 8/17/19. After waiting in line for 20 minutes I was told that they moved my location to rockingham road in Davenport, IA due to availability. On my way to the new location (around 9:40am) I got a text that my location was moved for pick up and someone from the rockingham road location called me and asked if I was on my way. After waiting for around 10 minutes at Rico's Tire (the Rockingham location) a man showed up. Finally around 10am we were able to start the rental process. The first thing the man said is â€œwell I've only done this a couple times.â€ He had to call his boss in order to use the system and it took extremely long because he didn't know how to use the system at all. After half way through the rental process it was realized that all the location had was a 20 foot truck when I had ordered and got confirmation for a 15 foot truck. This location wanted me to pay for the 20 foot truck. When I called back to the west Kimberly location for assistance, I was put on hold for 15 minutes and told by the associate that I should be paying for the 15 foot truck and not the 20 foot truck since I was automatically upgraded due to unavailability on uhaul's end. I was told by the associate at the west Kimberly location that I should â€œjust take the 20 foot truck because they're short on trucks in the first place.â€ The rockingham location guy had no idea how to charge me for the 15 foot truck instead of the 20 foot truck and had to call his boss to come help him. His boss showed up after another 20 minutes of waiting (his name was Caesar) and he was immediately rude, short with me, and obviously frustrated that he had to come in to help. When he showed up, the rockingham associate was talking to the kimberly associate on the phone to try to resolve the issue and Caesar said to him â€œwhy are you fucking talking to anyone, you shouldn't be talking to anyone.â€ He hung up the call and gave my phone back to me. He logged back onto the computer and let out sighs the entire time, making me feel like I was wasting his time. I finally agreed to take the 20 foot truck because I had people at my house waiting to move my stuff and they had been there for 1.5 hours now. Once I got the truck home I realized there was also no utility dolly (which I had paid for). This experience took almost two hours and was the most frustrating and inconvenient. I also experienced the worst costumer service I have ever come across. Due to this, I never want to use uhaul in the future or recommend it to my friends or family. I was treated terribly, never made aware of the location change, and most of all charged extra for a larger truck which is not what I reserved online or wanted.

The person helping us was FILTHY!!!! The pads weren't ready and he didn't have our ordered dolly there. He made us go to another location to pick it up ourselves. Please note this other location was the location we had originally booked, but you guys changed it to a location in a questionable part of town. The person â€œhelping â€œ us also dropped the extra coverage I had ordered and then refused to put it back on when I called him once I discovered his omission.

Wasn't open on time. Very dingy and ran down.

The location was in a "run-down" part of Davenport, IA; and it didn't make my wife & I feel very safe. My biggest complaint about the place was their inability to hook up the vehicle transport correctly to the UHaul truck. After they connected it & hooked up the chains, I quickly noticed that the chains WERE NOT connected properly. The rubber grommets to keep the chains from coming off were not on correctly, the 3rd chain (safety chain) was NOT connected, & with wiring for the lights was wrapped around the hitch. As soon as my wife & I got to Waterloo, IA; we stopped in at the UHaul on University Blvd and had them hook things up correctly. PLEASE do not take my word on this situation, refer to the picture uploaded by Nico's Tires on how the transport carrier was connected. Thank you.

The truck smelled very strongly of weed and their was mud all over the inside. I had to wait for an hour and a half for the guy to show up to give me my keys. And the call center I called was incredibly unhelpful. It was a terrible experience over all.