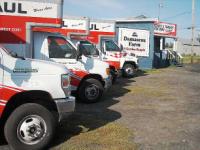 Again the location and the person working were fine. It's uhaul as a whole that is horrible.

FirstL. My online contract was incorrect, as if it defaulted to original settings after I made changes. The location for pickup was not the one I chose, and the equipment was the default selections for the size of the truckâ€”which I had edited to only include one appliance dollie. Second: the gas tank was just under 1/4 full, so we had to get gas right away. We used the estimate of how much to purchase based on the miles we were going to drive, and added just a bit more to the tank. On returning the truck, even though we used less miles than planned, the level on the tank gauge showed slightly different than when we picked it up, even though it should have been more! Gas gauges like that are NOT accurate representations of how much gas is present or replaced. U-Haul should require that the tank be filled, not that people try to estimate some fraction of a tank. We are going to be charged $58.50 for this because I was not available yesterday to return to that location and add more gas to the vehicleâ€”which I should NOT have had to do, anyway! I am really angry about this, and plan to dispute the charge through my credit card. I will not recommend U-Haul's services to anyoneâ€”in fact, unless U-Haul reversed that charge, I will file a complaint and also post a negative review on Yelp. I can be reached at 406-390-0084 or drtrishvoss@hotmail.com for more information. Respectfully submitted, Trish Voss

I was very pleased with the person who helped me out thanks again also I would recommend this place:)

There needs to be signage at this location.

They could use a sign out by the road, and need to update their voice mail, but otherwise all good.

According to the website, they were supposed to be open when I got there, but had already closed.

I reserved an appliance dolly. When I arrived, I was told they didn't have one and would have to use the small dolly. This made it very difficult to move my appliances. Very disappointed. I requested the $50 because they did not have the equipment I reserved. The woman did not know what I was talking about!! Very poor customer service!!

stop us Damascus OR. No innet to check informent no walk around before take truck off lot. no applance dolly. had to go to 82 nd Ave for dolly 82nd Ave is great help get informant . great guys at 82nd at Happy Valley.

I was called 1 day into my move to find out if I was going to be dropping off early, so they could rent it to someone else. I paid for 2 days, I expect to not be harassed during my move. This will be the last time I rent from U haul.

Be more pacific and actually tell the costumer times needed to be dropped off instead of just the date so they know so there not charged a hole day for 2 hrs late I don't think this was right.

The service was great, but my truck was the only piece of UHaul equipment on site. They had my truck and that was all I needed, but if I had needed anything else I don't think they would have had it. This location was out of the way for me, but UHaul did a change on my reservation and sent me there.

Had to hook up my own trailer, trailer was dirty with rock and debris. Called customer service to complain and received a phone call within 45 mins from the manager.

I was absolutely over charged and will be issuing a chargeback through my bank. I went a total of 13 miles, used barely any gas and was charged for 5 gal of fuel, 39 miles.. My estimated charge was approx. $65 after insurance and I was charged $119.

I wouldn't change anything.Great to work with.

Faster check in check out. Having pads as promised on line

Where to begin, where to begin. The lady who "helped" me was one of the rudest people I've met in 2014. She was incredibly curt on the phone and, when I met her in person, she didn't say hello or even acknowledge my presence. She got out of her truck and went inside the building, closing the door behind her. She poked her head out five minutes later and said "Were you here to rent a truck or...", and I said "Yes, I'd like to." She followed up with "Did you still want to do that?" and I said "Yes" (even though I considered saying "No"). What followed was a 60 minute disaster. Not only did this lady seem completely unfamiliar with the basics of human interaction, she clearly didn't know how to use her computer and printer. I literally stood there and looked at random things in the feed store while she muttered at her computer for about 20 minutes before calling a supervisor or tech support or something. Then I tried to look at more random things while she wasted another half hour blaming "the computer system" for not working. I would have left without the truck if I didn't desperately need to move out of my apartment that day. The one upside of that godawful place was the adorable dwarf hotot in the middle of the store. It knew all too well how terrible the woman was, and I'd like to think we bonded over our shared misfortune. I wanted to adopt it...maybe I will someday. Oh, by the way, the lady told me to inspect the truck -- which is her job -- and she didn't walk me to the truck or start it or put the equipment in the back or anything. AND it was the wrong size truck. This was the absolute worst customer service I've experienced in a very long time, and it'll be a cold day in hell when I go back to that crappy little feed store. Just don't tell my little bunny friend.

My nephew dropped the truck off and it was a situation of leaving the keys and not seeing a clerk. I had an extra charge added to my card and I have no idea why. This, quite frankly, has irked me and I would not recommend this location as I deserved a call about this before I was billed for whatever they determined I needed to be billed for.

You couldn't have done anything different to make it better. Good moving experience.

The computers at this location were not professional and did not communicate well with U-Haul. I stood for an hour while they played with the computer. I left and told them if they got it working to give me a call. I got about 5 miles from their location and they call telling me they only had to swipe my credit card again. I drove back and they swiped the card and nothing happened. I left and called a professional U-Haul location and asked if they could help me. They contacted the regional office and they resolved the problems.

This was only location that had a 26ft truck in gresham area only thing wrong with truck was the fuel efficiency gauge didn't work but that isn't this dealers fault other then that perfect !

Thought the customer service could have been friendlier. He seemed cold and somewhat rude. He sounded unsure if he would even have our truck at his location at the time we needed it.

The owners were friendly and courteious. Rental process was quick and easy. Greatly appreciated everything

Loved that they were open until 6pm and were willing to let me come in last minute for my rental. It was much appreciated!