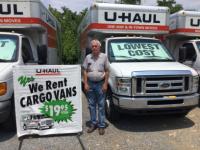 The man who owned this U-Haul facility did not arrive promptly and we waited for him for 45 minutes after our scheduled pick up time. After he arrived, he was very hateful and disregarding. I am unlikely to use U-Haul again due to this poor experience.

The truck was fine. The business, a small shack, an old slow computer, no orientation to the truck, no instructions on how to return the truck, was shoddy.

The gentleman that worked there was an older man that did not have proper trading how to do his job. I ended up having to show him how to use the computer and issue the uhaul to me. The morning I went to pick it up they did not have what I reserved and it took me over an hour to get approved to get a booger uhaul in which they finally did, and charged me the same price as a smaller one

Confusion by attendant about which truck to allow me to have. Another customer Present at the location was told by attendant that truck my app said was issued to me was hers. After 45 minutes and several phone calls to UHaul, he allowed me to proceed to finish check in & take assigned truck.

Very slow check out. No printer, everything had to be hand written.

Absolutely Nothing to improved !! ** Just to add a comment: -** The service of all who were involved Went like clock work from the beginning to the delivery truck back .. ... Was very very impressed at their knowledge and helpfulness !

Provide customer with a phone number or at least a voicemail to contact the guy we rented it from would be great. Just to be able to speak with him or leave a message.. Anything other than just dropping your key in a box would have relieved my stress level as I wanted to tell him Thank You and that we had delivered the truck back a day early!! As I understand it??,, he will be able to tell that by gas useage, miles, ect., but to make sure.. I'm only left with the option of checking my bank account to assure the amount withdrawn is correct?? Today is Saturday and when I checked it this morning there was still no charge. So that means I'll have to wait and worry until Monday before I can find anything out and then if it's the wrong amount, go through that long process of getting someone to post a credit to my account!!! Which could have been all avoided with one simple â€œPhone Numberâ€ or a â€œVoicemailâ€... Other than that â€œONE SMALL DETAILâ€..... IT WAS A GREAT SERVICE THAT I WILL BE USING AGAIN AND RECOMMENDING TO MY FAMILY, FRIENDS AND ASSOCIATES! Thank You. A.R.

Everything went great, the man was very informative also reccomend I take photos of the miles and fuel so we both know where it was at pick up!

When I got the truck, he said that it was half full. When I got into the truck, it was slightly below halfway mark. I drove 70 miles and then put in $15 of gas that brought it back to the mark when I got it. He called me on Sunday morning and told me that I had 5 minutes to come and get the truck and put it another $10 of gas. How could I have driven 70 miles, put in 7 gallons of gas and still be charged additional $10? This will go on my social media not to use Uhaul or at least take pictures of tank otherwise you will be ripped off.

Customer service was eceptio all and it made our move alot easier. We had to use the truck longer than anticipated however we didn't have any problems extending our use. Thank you all again for everything we needed. Will definitely be letting others know that if they need to rent a large truck, small truck, tow dolly or any type of moving needs that U-HAUL is the way to go. Bless you all.

The drop pfff was basically an open field with a metal storage building for an office. The open field made it easy to drop off the trailer, though.

We were not able to pick up only with mobile app. Major issue with Rep. at pick up location. I would not recommend using this location.

Nothing. The whole experience was easy and professional.

Have a working air conditioner

Most unprofessional person and location I have ever experienced. Leaves a bad taste for uhaul corporation!!!! This would cause me to never use them again!!!!

Was not aware of the 0.99 cents a mile, was told 40 dollars flat rate. I literally drove to Atlanta and back in a few hours. Ridiculous, would not recommend.

This trip was hassle-free. Truck was clean, picking up and dropping off was a breeze

Have more than one person working there if possible

Asked for an appropriate receipt and was not given one at the place. It was emailed to me the next day.

No one at drop off site even though hours of operation were advertised when dropped off.

The fellow we met was personable and helpful. He was waiting for us when we arrived, and he handled everything quickly. It was a great experience.

Extremely nice gentleman performing duties for UHAUL as a Customer Service Agent in Dalton, GA. The entire process was effortless with my rating the best ever.

I got a call to drop it off here from the guy that works there. So I called uhaul and confirmed. When I got there he was not there. I called him several times and no one answered. After 30mins Of waiting he shows up finally only to tell me to go put more gas in it. I told him I was already behind and to just charge me. He told me no I needed to fill it back up where it was. So I had to drive down the road and put additional gas in it. Not friendly at all