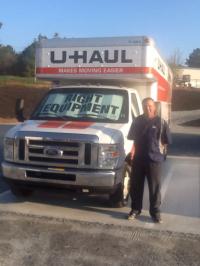 U store it place. Got help by telephone.

The phone number goes to a fax machine. The hours of operation on the website are misleading because no one is ever there. Thank God for Tracy and Mgr Bill at Star Storage for their help renting and returning the truck. I think this location should be shut down for false advertising. Even the guy mowing their grass says they are never there. I think I deserve a credit back to my account for lack of service by this location.

This was not the facility where I made my reservation, I did not get the truck I had reserved, and when I arrived at the pickup location the place was closed. I had to Mack calls to U-Haul to eventually get a truck. I desperately needed a 15 ft. truck, that is the one I reserved. The location we were moving to has a very narrow driveway with two turns. The 24 ft. truck that I eventually received was so big that it caused damage to my yard because it was too long to navigate the 2 turns. I would be very cautious about using U-Haul in the future. I am very disappointed with my experience.

The vehicle was checked in 1 day after it was dropped off!!! Resulting in an extra days charge to me. Uhaul corporate called me on several occasions looking for the vehicle and neither could they reach anyone at the drop off location. Would not recommend this location

Website times of operation not correct. Took truck and business gates were locked. Called next morning to confirm time of operation. Took truck when told but no one was there. Called back and was told to leave key in drop Box. Called back that afternoon to confirm truck was received. I was told all was well. Then received a call from corporate the following week stating the truck was eight days past due and had never been checked back in! Very unprofessional for a company this large.

The West Forsyth Storage location is HIGHLY NOT RECOMMENDED. I went to this location to pick up the rental truck and no one was there. I waited around an hour for some one but no one showed up. I called to find a different truck at a different location which was a hassle and was informed to take the already reserved truck from that location even though no one was there. Upon returning the truck to that same location at West Forsyth Storage there was no one there to check the truck back in. The gates to the place was open and the office was open but with no one on the property. I was threatened with late fees because whoever runs the Uhaul operation at West Forsyth Storage was not present and didn't check-in the truck I had rented. This was a terrible and inconvenient experience. I will never use the West Forsyth Storage location again and it's quite possible I will never use Uhaul again.

Uhaul Probably don't care about this review but the scheduling is really bad, I had to drive 45 minutes to pick up the truck at a different location because they messed up my order, and charged me extra miles when at least it should had been unlimited or no extra miles charge at all for all the trouble they caused me. I will never do uhaul again.

Reserved truck for 12:00 pickup. We got to the location at 12:45 and it was closed although the gate was open and the open sign was on. Called the number on the reservation and there was no answer. Took a chance and called a number that called me at 11:30 (no message was left). The man who answered was from the Uhaul location and told me that they close for lunch at noon and since I was late I would have to wait. After 30 mins passed, I called him to get his eta, no answer. Another hour went by and after many more unanswered calls we assumed he was not going to show and that if we wanted to get a truck, we would have to go to another location. Five minutes after I left, I got a call saying that he was there and if we came back we would take care of us. We returned and we did get fast service which was great, just wish we didn't have to wait almost two hours for the truck. I would recommend that the owner post accurate operating hours and leave a message if they are calling to let you know that if you are not on time, you are going to have to wait. It would have made for a better experience and not a time wasting one.

We called in advance to drop off the trailer, and were told that the office opened at 11am. Another gentleman also arrived at 11am to pick up a rental truck. When we arrived, the gate was open and the "open" sign was lit up, but no one was there. My wife and the other gentlemen each placed multiple calls to U-Haul customer service, but to no avail. As of 12:25pm, no one had yet showed up. We finally just left the trailer at the front door. Overall, the rental experience was frustrating. Please ensure that we are not over-charged.

I passed at least five u haul locs to get to the assigned pick up location. The location had no record of my rental, although I had an email with the reservation and location etc. Very poor service, appeared not the be the problem of the franchise owner. He tried.

I showed up at 11:00 a.m. and waited for 30 minutes. The open sign was lit but no one was there. I called the number on the door and he didn't answer. Finally he returned my call - with me still standing in his lot - and told me to unhook the trailer and put me receipt in the dropbox. Thankfully I knew how and was physically able to do this. Not sure what I'd have done if this wasn't the case.

Excellent service. In and out with no hassles

I feel they took advantage of my elderly mother by giving her misinformation and charging her more than what was acceptable or needed. They lied about the need for extra insurance and the how many days and miles she would need. In addition they told her she would be charged only for the miles/days used then charged her card in full. They are very hard to contact as well and they gave her a piece of wrong equipment; a furniture dolly when a regular box or appliance dolly was requested. They also lied to the person picking up the equipment, saying that there were extras (such as insurance) that the person renting has expressly wanted. They were reluctant to have this person sign anything or even take the license of the person whom would be responsible for driving the vehicle. Then instead of running the card through a processing machine they took a photo copy of it and when it was stated that this made the card owner nervous they said that it had to be done this way if they wanted to rent the equipment, they also took the card information over the phone. These are both very insecure ways to be dealing with private information such as credit cards. All totaled this was the most unpleasant experience with U-Haul and I feel that it was essentially robbery. I am very displeased with this facilities actions and service and expect reparations on my mother's behalf! This is an unacceptable way to conduct business!!!

Very professional and help staff of folks. Will use again when I need to rent a truck...!!

Offer some coffee!!if is cold or a cold drink if is hot(weather)