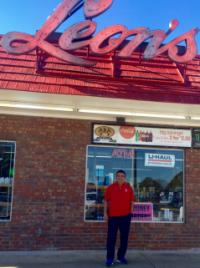 The store was ok since it's a gas station. The parking lot for the trailers needs some serious work for sure. I guess after coming from bigger cities they facilities are much nicer.

Overall terrible, the staff didn't know how to get me my already reserved trailer. They didn't put in your system that I returned the trailer, same day have you, and I believe I was billed as such. I had to go down there and resolve the issue myself. This was the worse experience I've had with uhaul, and I doubt I will be using this service again. I will be telling everyone about this event and that they should not use this location for their uhaul needs.

Attendant did not know how to tell if ball joint was secured properly when he took a photo inspection. He passed it but it was loose. I fixed it myself after trying to drive the car onto the trailer. He also forgot to check the lights, I had to remind him.

Attendant did not know how to tell if ball joint was secured properly when he took a photo inspection. He passed it but it was loose. I fixed it myself after trying to drive the car onto the trailer. He also forgot to check the lights, I had to remind him.

Horrible location. The clerk wouldn't check our equipment then charged my card 160.00 for a missing dolly that was inside the truck.

Get a jack for the 6x12 trailer, it requires two people to lift the tongue and we had to result to stacking large rocks to help get it high enough for the truck hitch.

The trailer reserved for me was sitting in mud / gravel in the rain. Quick physics lesson, things get MUCH harder to lift when there is suction between the plate the trailer is sitting on and the clumps of mud / gravel around said plate. I was provided a different trailer eventually but later was accused of not returning equipment. Apparently my trailer converted into an automobile hauler when I was assigned a different trailer (not car hauler). I wondered, how bad could it be to rent a trailer from a place with low reviews already...that was my mistake and it won't happen again.

Added insurance for $56 but I don' recall being offered a choice.

Returned autotransporter day after pickup. They said no one there who knew how to check it in but it would be taken care of. On 6th day received a text to return trailer. I called numerous times to get it straightened out even though I was told they would call me back on 30 minutes. Per the clerk it was taken care of & I would receive a confirmation email. It's almost 2 weeks later & have not received any email.

Get rid of that smart ass behind the counter

The worst customer experience I've ever had. When I went to pick up the truck I had no paperwork to fill out he handed me the keys and told me to have a great day. He didn't check mileage he didn't check for damage he didn't check the gas hand. I wasn't offered insurance. I get a call about an hour after I leave from a gentleman named Bill, which was great customer service, and he asked me to fill out some things online So that they would have my information. Once I returned the truck the gentleman behind the counter which I believe is the person that owns the store was extremely rude tried to charge me double the amount. He became very aggressive I felt very threatened. In the hour that I have the truck and if by chance something would've happened I'm not sure who would've been held liable me or Uhaul but no one even knew I had the truck. The worst customer Service experience I've ever had. I've rented from Uhaul multiple times never with this result. I truly feel like U-Haul owes me money for the inconvenience as well as the mental anguish the store owner inflicted upon me. My account has now been hit for $110.81 yet my receipt states $103. Please feel free to call me 678-858-9517.

Drop off location was very nice

Carlos (employee) was of big help however I will NEVER recommend this location or UHaul for that matter. My initial reservation was for a different location and no one contacted me the day before to inform me of this. I found out via email; that's a fail. When I arrived at the new location( listed above) the truck was FULL of trash, I have photos; another fail. Carlos contacted his sup and discussed. It was also mentioned that right next door had trucks and I asked if they were going to cover the bill, especially for my inconvenience. I contacted the original location and Sommer Price, after speaking with her reg mgr, said there wasn't anything they could do (fail) however she did call back to tell me that a truck was returned but Carlos had already dumped the trash and was filling the tank. After that Carlos scanned my card prior to issuing supplies however I did not take 24 pads but only 12 and he wrote a note on the bottom for me to show to the drop off location instead of crediting my card then, "Customer only took 12 pads and a dolly. Please fix the contract. Call Sam 404365xxxx"; fail. I drove from Newnan, GA to get this vehicle oh and a suggestion...the system should be set up to tell requestor what's available and where, instead of my experience. I understand the anomalies where equipment doesn't get returned on schedule and others however there has to be a better vetting process than this one. Absolute worst experience, also, if I am on your mailing list remove me.

No one hooked up my trailer. It was manned by a single guy who couldn't leave the store. I was given a trailer ID number and a receipt and told to go find it. Lucky for me I've hooked up a bunch of these trailers so I knew what to do but if something were to happen because the trailer wasn't connected correctly that could be a problem.

They need one person to handle Uhaul They run post office, gas station, ice cream stand and store Had to work me in between customers NO Help loading trailer or getting dolly

great people, very nice and quick to check out.

The cab of the truck was beyond dirty. The location was not my first choice and I passed at least two other U-Haul locations to get to this pick up location.

When I returned the vehicle, I took a picture of the mileage. I was charged $20 more for the mileage than I actually used. I also did not need a dolly or furniture pads, and expressed that I did not need them, and was charged for them also. Very disappointed.

Get the man some help. One guy running the show. It's a very busy corner store that offers everything, Post office, gas, convenience needs, and U-haul rental. The man was very nice but also had to attend to many customers at the same time I was signing in for my rental.

Minimize Check out time, it took over 30 mins

I was told I would be getting the Uhaul for the same price as the 10ft because their was not a 10ft available. But I did not, they still charged me for the 15 ft. The Uhaul had problems starting every time we stopped and turned it off.