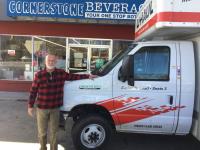 Cab smelled and was very unclean

Was charged an extra $29.99 for 1-2 hours over my rental due to traffic on interstate accident. Tried calling location and never got an answer. Cost of rental was not worth it and should've found a cheaper source.

The marker lights on the wheel covers was out. We didn't see it until it was dark and I was several states away. They was the only lights I could see in the trailer while driving so I had to pull into a busy truck stop. Thankfully my boyfriend was able to fix them but had I been alone I would have had to spend the night at this truck stop because it would not have been safe to continue to drive it.

I never experienced that much professionalism and friendly staff in other location than this one . Thumbs up !!!

Man helping me was super understanding and helpful despite how late I was running.

The lady who checked us in got very upset when my husband told her there wasn't any blankets or dolly in the truck. She said it wasn't a big deal but we wanted it noted they weren't in there. She didn't even know they weren't in there and we didn't want to be charged when we brought it back. He asked for her to write something down and when he walked back out she asked very angrily if he was always hard to deal with. I do not plan on ever using that location again.

The guy insisted they didn't do pickups after 3:30 and it took him almost ten minutes of arguing with me that he didn't know what he was doing before he would finally call someone to walk him through it. Was told he didn't know how to check out the dollies so i couldn't have one. The truck cab was full of dirt and dust and smelled like cat urine. Overall very inhospitable staff and very frustrating experience.

Just keep doing what you are doing!

Get the order details correct, so the customer does not have such a hassle with the details of loading and unloading crews. These crews cost in time and money that is wasted when your pickup and time are not correct.

The owner was amazing! Will use this place evertime I need a uhaul!

Oil your truck ramp, very difficult to slide it out & back in to place

This lady was extremely busy yet she maintained her professional manner and expedited everyone as quickly as possible. She was very helpful and knowledgeable.

The lady was pleasant and understanding of my AC and other issues. Very nice and friendly.

We were charged twice for our rental which equaled 152$ for two days and only traveled 30 miles total , filled the tank to 3/4 where it was when we received it. Charged overdraft fees because we estimated at the most 85$ . We're told someone would get in touch with us from U-Haul and the store where we purchased it said I would have to get in touch with the U-Haul company to get my money back??

I don't recommend the online pickup. I was charged for fuel, when I returned the truck at the same level as when I picked it up. I picked up on 7/8 tank, and returned on 7/8 tank.

Bad experience!!!! It took 45 min to get my truck. The gas level was incorrect. Then the next day they called asking if I was bringing the truck in when I rented it for two days. Unpleasant in every way

It took us about 45 minutes to do the paper work. He said the system was new and didn't know how to do it. Had to call someone on phone to walk thru the process. Make sure you train before leaving them with a program they don't know how to work. He was nice and apologized.

Other than the muffler being blown out and noisy, the power steering not working at idle, and not being able to be drove on the Express way in the mountains haveing to take 2 lane roads for 500 miles it was good.

Pam was awesome at getting us a uhaul ready for our move.

Charge what you say you're going to instead of ripping people off. I was pissed.

I specifically requested an 8 foot pick up truck and it was not what I received. The initial transaction to receive truck took a long time. I was over charged during that transaction and was given cash instead of taking the time to correct the order. The truck had unmarked damage that I addressed prior to leaving. Return was fine since I only handed over the key to clerk. I made note of time and mileage since she did not. Final receipt received the next morning as promised, but i cannot view it. This has been unlike any previous Uhaul experience. I will not recommended this location and will not use this location again. I will closely watch the credit card used for this transaction for the foreseeable future.

They were not really familiar with on line pick up

First of all, I reserved a 15ft truck online, and it allowed me to select this location. Then I got a text message that said my pick up location was almost 45 minutes away? But we got that taken care of no problem, I just had to call. Then, we had to pay $100 deposit along with the estimated cost up front, even after me putting all my card info on the website? Why? What is the point of your website? And there was no notification by either party that we would have to pay $100 cash deposit. This policy should be posted and made clear. Because we, of course, had to leave and go get more cash and go back again. My main point is that either that store has their own policy about cash customers, but I am not comfortable with the fact that we had to put our card info and have to put up double the amount in cash. And how are u punished for paying cash? The whole thing seemed strange to me and I feel like the website is pointless...it was supposed to make things more convenient.

I was charged for 66 miles when it was only driven 13 miles.