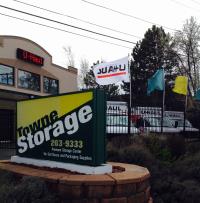 Along with a 10 foot truck for a local move, I rented 2- 6 pack bundles of moving blankets. Returned the truck within the 24 hour rental period along with 11 of the blankets in the back of the truck. Two days later the "manager" called wanting to to know when I was going to return the blankets. I told him they were in the back of the truck, but one was missing and I would return that the next day. I returned the missing blanket and was charged $43 as a late fee!!! Manager claimed he could not "close out" the contract until all the equipment was returned.........a U-Haul requirement that he had no control over. If that is U-Haul's policy, it is ridiculous! I had to tell him where the blankets were and told him I still had one I would return the next day. That is in no way to treat ANY paying customer in ANY business. He was very arrogant and mocking as I left the premises. I would never advise ANYONE to ever do business with this location, Towne Storage Union Park LLC and if my dispute is not resolved with U Haul management I would never recommend using U Haul for any moving needs. $42 for ONE blanket!! Are you kidding me?

The truck was noticeably clean but my windshield was really dirty and filled with a lot of bugs. I was in a hurry so I did not ask the location for assistance, also because I didn't think they had a facility to do it in. Also the location is small. So when I returned the truck during after-service hours it was very hard to find a good location to park it in.

This location was very clean and organized, and the customer service was fantastic! The sales representative made the check-in/pick-up process fast and easy, and he even came out to assist with adjusting the mirrors of the vehicle! The vehicle appeared to be in great condition... However, upon first driving the vehicle, the cab began to violently shake. We thought it was just because the vehicle was empty, but after loading it full, it shook even worse and you could visibly see that the front of the vehicle was shaking when in motion. We stopped driving and called road-side assistance. They came to our aid within a reasonable amount of time (~2 hours) and discovered that the front tires of the vehicle were out of alignment and completely worn. The technician told us that the vehicle was extremely dangerous and we no doubt would have had one or both tires blow out. Within a half hour, the technician replaced both tires, fixed the alignment/front springs, and then took the vehicle out for a test drive and confirmed that his repairs had completely eliminated the violent shaking of the cab. While I am extremely pleased with the customer service and promptness of the road-side assistance, I am very concerned that we were rented a vehicle that had not been inspected/routinely maintained and was considered to be extremely unsafe to drive by the technician. I don't want to imagine what a double-tire blowout of a fully loaded 20-foot truck in winter-like conditions could have resulted in. Customer safety should be a top priority.

I was a little lost on the after hours self put away for the truck but when I made up my mind on what to do I got out of there pretty fast.

Would be nice if you can walk out after returning the truck. There is no place to call to get an exit code for the gate. Had to crawl under the gate.

Truck is probably the oldest, or most miles, UHaul truck I've ever rented. The knob comes off the driver window winder every time you use it. It idles rough, and sound terrible; the ride is rough down the freeway, on what is normally a pretty smooth freeway, and that rough ride is true whether the truck is loaded, or returning empty.

Having a dolly and sack of furniture blankets zip tied to the inside of the truck was quite annoying. They took up space, along the wall, right inside the door, where they were very much in the way. They interfered with the loading process, and - more importantly - they occupied space we had counting on using. We reserved two dollies, one of which was the same model as the dolly we found zip-tied on the inside of the truck. The attendant would not allow us to simply use the zip-tied dolly, and leave behind the identical one we just signed for, even though the cost would be the same. He would not cancel the rental of the dolly. We would have greatly preferred not to drive an extra dolly around town. If this is a U-Haul policy, it is very annoying. If this is the policy of the angry attendant, U-Haul should be aware that there is an individual representing their company, who is making them look bad. The attendant was clearly not in a good mood. His whole demeanor was a bit abrasive, and he said some strange things. (Example: he stated that he would charge an extra $5 for every Starbucks cup he finds left behind in the truck.) I had no intention of complaining, but I received two emails with feedback requests, and decided to oblige with honest responses.

Dave in the office was an excellent professional. He was busy with many rentals the day I rented. When another client did not have the van back for me he suggested another truck. Gave me the mileage rate for the van I reserved. He is the best u-haul representative I have seen with 45 moves over my lifetime! He would be an excellent trainer for your company....Senior client

Location directions on how to get into the freaking gate was a joke. The app for HAUL SUCKS! It doesn't work and the directions are not clear your call center sucks I had to call 3 times just to try to get help on unlocking the lock once I found the truck walking all the way around a entire storage facility. The lock wouldn't open. The app just sat and din't advance forward to the next item on how to check.. Let me go back to the begin the guy zak I talked to at the place the day before said on yay its super easy we will have the truck out front and you can just come an pick it up. complete LIE. I deal in banking/lending on technology all day and your day it NOT user friendly and it no clear on how to do things!!! The drop off was another clear nightmare. the app wasn't working #FAIL

The truck was hard to drive, dirty and the service was poor.

Instructions and charges are not clear

The employees at this location are the living embodiment of the word â€˜kind'. They helped me find the least expensive way of moving, took their time to explain to me the contracts so there was no rush, and were all smiles. 100/10 would recommend!

It was okay but the truck was all scratched up and very dirty as I indicated when I got it and filled out in my review before hand! He screwed up drop off location had to travel almost 30 miles more to go to the west Jordan location. Our contract even has the Murray location. We waited on phone over 40 minutes to talk to a representative! Finally at 9 pm we gave up and drove to West Jordan!!!

The equipment was in good shape and it is a fairly convenient location (albeit with an inconvenient entrance only from the south). My problem was with the time it took to check in and out on the mobile app. In my case, my assigned truck's combination didn't work, causing me to take even longer as a customer service phone rep had to talk us through taking another vehicle on site. My problem was resolved but it was really time consuming compared to a live person.

Perhaps clearer signage can be available for those not familiar with the location. It wasn't abundantly clear where to pick up/return the truck. Admittedly I made a mistake and went in the out gate because that was how I got in to get the truck. The attendant was extremely rude. Instead of informing me of my mistake, he approached my truck, opened the door, and yelled â€œWhat are you doing!?â€ I said, â€œI am returning the truck I rented.â€ He proceeded to berate me about how dangerous it was to back up in that space. I did not back into the space, I had to turn the truck around to get it in the proper positioning. Prior to me entering the exit, he offered no clarification about where to go. Not impressed with the customer service for renting trucks there. I would be unlikely to return to this specific location as I have had much friendlier, more helpful experiences elsewhere. Thanks!

It is extremely difficult for the average driver to pull a 26 foot truck into the Narrow back area of the building. Especially to have to parallel park it between two other trucks within that narrow area. It would be nice to drop it off in front and have someone more skilled park it properly. We managed as best we could. The self pick up was a little difficult to figure out at first, but ultimately was pretty easy.

Maybe explain where to go to park the truck when returning it.

You worked with me every step of the way. Please just keep doing what you are doing! Thank you!

There was just some old food scattered throughout the vehicle.

You guys charged my card twice, the uhaul was trashed, and you forgot my dolly. Will never use you again.

I was especially happy to have carts onsite at the storage facility. The manager, Zachary, was very accommodating and helpful.

Explained everything well and friendly.

The inside of the van was fairly clean but the outside was not at all. The weather was a bit crazy so that's probably the reason for the dirty exterior