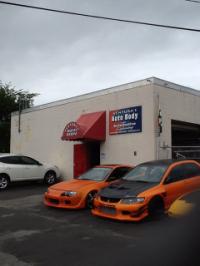 The truck was dirty on the outside and inside of the driver area. There was only half a tank of gas. I requested a contactless pick up and drop off and the guy would not allow me to do contactless for pick up. When I got there he kept touching his face and eyes - he requested to see my ID and I tried to show him with me holding it but he would not allow that. He wanted it and took it while proceeding to touch his face - we are in the middle of a pandemic and this is unacceptable. He had no gloves on or anything. Also, when I originally requested the U-Haul I requested a bigger size and day before they changed the pickup time and size of the U-Haul. It was a horrible experience and unacceptable. I'm not happy at all.

Truck was reserved for 3pm when I got there the truck was still out, not the locations fault but it took almost an hr to get the truck checked in and me to get the key. Owner was gone, 1 guy working store, owner wasn't answering phone to do the Mobil check in. Finally got the truck had coffee or pop spilled inside drivers door, huge lack of communication between employee and owner. Employee was super nice and tried his best to remedy the situation, I spent a hr standing in the store with my 5yr old granddaughter, next time I will go to the main Uhaul on 4th Ave

1. Booked online that was okay. 2. Rented the uhaul for $74.84. 3. Asked how long i needed it, i said for a few hours(kind of different usually you rent it return the next day). 3. Return to 445 E17th ave Columbus Ohio different person when i rented the truck. He acted like he had no clue. Talking about its okay i said are you sure. Took pictures of the milage. I paid for 25 miles but only used 17 or 18 miles. 4. Today is Monday August 24th i checked my account they put another charge of $101 on my card. Tried calling no answer who pays $176 for a uhaul for 3 1/2 to 4 hours. Put gas back where it needed to be smh horrible place do not use if they dont speak english(sorry). Don't use side shops use uhaul only.

The gentleman who processed my car was not wearing a mask, and was actively wiping his nose while handling my credit card. In a pandemic, I prioritize places that prioritize everyones health and safety will not be going back to that location

There was no attendant on site. Had to speak w clerk at neighboring store only to learn the on site person had left and I asked to phone attendant to gain keys. Dolly and blankets which were pre ordered were not in truck. Phoned two hours later for refund on same due to not being in truck only to be asked for truck number and was told it wasn't in system that I had even picked up the truck. Extremely disappointed. Very poor customer service and will be reluctant to refer to friend / family.

This was by far the worst customer service experience I have ever had. My appointment time was 9am and I didn't get into my U-Haul until almost 10am. The man working the counter was unnecessarily rude and was NOT wearing a mask despite the state mandate and a sign on the door that said masks are mandatory. I returned the truck an hour before my drop off time and the same man tried to hand me a note with an address on it and told me to leave and take the truck to a different location even though he told me that morning to drop it off at the same location i picked it up. He was - again - unnecessarily rude when I asked questions about why I needed to take the truck elsewhere and started arguing with me about the truck drop off location. I told him I did not feel comfortable driving the truck to an unknown location. He was noticeably angry and frustrated. Although the U-Haul was helpful with my move, I will never go through this process again, nor would I recommend this to anyone I know, due to the extremely poor customer service experience.

Felt very sketchy and I was worried I was doing the after-hours drop off incorrectly.

I had to wait 45 mins for a uhaul. Had only 1 guy working for 5 people to get uhaul. Guy was rude unprofessional and was not sanitary or wearing mask during covid. We asked him to wear a mask and he said " no i dont have to wear a mask the sign is only for customers". He was coughing and sneezing and wiping his nose. He would stop in the middle of check in for uhaul to talk to other customers. Will never get a uhaul here ever again.

On-line check out was fantastic/quick/easy.

The truck was dirty. The process for getting the key took an hour even though I signed up prior and checked in on mobile. There wasn't a ramp on the uhaul. There were scuffs and dents in the truck that were not labeled. It did not seem like a respectable establishment. I rent trucks alot and that was the worst experience I've ever had.

This location was not in the best part of town but it was close to the location I was at for drop out.

Easy drop off! Close to OSU campus. In a convenience store.

The staff was incredibly rude and inconsiderate to all customers who were there at the time I was. The owner of the establishment didn't arrive until about twenty minutes until after it was supposed to open.

Terrible experience. The man at pickup was so rude, no dolly and overall it made the moving experience more stressful

Truck did not have the dolly & pads as requested. Store owner said we should have checked before we left. I have never had to do that before. They did give refund for them when we dropped the truck back off. Truck had multiple dings and the check-in app would not allow me to upload photos.

Literally an 1hr to pick up my truck. The store wasnt open, the guy had no idea what he was doing. I had people waiting to help me move and had to put everything on hold. It truly wasnt worth the 65 I paid and honestly a partial refund will be expected. You waste my time I want money back period.

The truck was absolutely filthy. The gas tank wasn't full and the online checkin process was terrible.

Worker told me I needed to fill up gas tank even though I received it with 1/8 tank and returned it almost half full.

The in person processing took about a half hour which was unexpected since I had already registered everything online.

This is a franchise-- can't expect the same level of professionalism across the board.