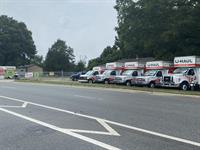 I ordered a 10' truck from a Kernersville location because of negative reviews about Carolina Xpress. I got an email from U-Haul the day before pickup that my truck is at Carolina and guaranteed pickup for 8am. So I got there 8am and they were closed. I waited about 10 minutes and still no one. I called the 2 numbers I had for them and only got voice mails. I called U-Haul and was told they don't have a 10' truck (even though I was parked right next to one) but a 15'. I didn't want that size truck. Then I was told the nearest 10' truck was in Thomasville 18 miles away. Finally they said an area manager was on his way to get me the key. While waiting a driver for Carolina Xpress saw me and asked if I was there for a rental. He called his boss who then called me. Isaac, the owner apologized, explaining that they don't open until 10am and didn't have any early morning rentals scheduled. The driver Trey then proceeded to sanitize the cab and sweep out the back of the truck. He did his best to get us on our way. We spoke for a while and he says that being a tow truck driver he sees people who need help and tried to get them going. Trey was very friendly, helpful and accommodating. Isaac, you have a great young man working for you. I would highly recommend Carolina Xpress for U-Haul rentals (and their towing services are probably just as good with workers like Trey). Thank you Trey and Isaac. U-Haul needs to program hours of pick up locations in their system.

Business hours were not accurate on the site. We ended up having to do the online return. Very small parking lot and not very clean out front

Have truck cleaned and checked out before customer arrives. Make sure all turn signals work. Don't make customer wait over an hour to fix and prep vehicle. Don't change drop off point and then charge customer extra day for it.

Took 45 minutes to get my truck. Lady behind the counter was brand new working her 2nd day and didn't know a thing about how to proceed with a uhaul rental. I had to walk her through the process. I use you guys about twice to three times a month and this was a huge waste of my time. Not pleased at all. She didn't print out the contract. I had to take pictures of the fuel and mileage and she just wrote them down. Very unprofessional.

I had a very bad experience with this location and will never use it again. It's poorly managed and the terms of the contract were never revealed to me until after I saw them in an email. The office is dirty and I feel sorry for anyone that has to work there. The rep, Stephanie Tuchman, was the only bright spot in this establishment. She was extremely helpful in sorting out my issues.

Great experience. Such friendly people and extremely helpful in a difficult time. Took great care of me while my company truck was down. Great company!

Friendly courteous and really did all he could to get me a truck last minute!!!

Customer service was horrible! Guy was 20 minutes late. Did not acknowledge me at all or apologize for being late. Made a rude comment to me and then proceeded to tell my daughter to remove her rating and not to sabatoge his business. When I first came into the office to pick up the uhaul he did not look up at me or say hi or anything. Kept looking at his computer and asked how he could help. Only thing at this point that he said remotely nice was â€œthank you for registering online, it makes my life a lot easier!!â€ But being late at my appointment time I guess made his life easier as well. I will NEVER recommend this Carolina Xpress to anyone and hope I never have to deal with them again.

Dropped off on Sunday right at closing, they had me just park and they checked in the next day without issue. New business, great location and seems to be coming along. I would caution those not good at backing trailers as it is a little tight for long units.

This was not my chosen pick up location. UHaul corp called less than 24 hrs before pickup & changed to this location. We were supposed to pick up at 9 a.m. Had to push back to noon, checking in advance that location would be open then. He said yes but upon arrival we had to wait for him to return fr lunch (about 45 mins). Then he helped someone who had returned fr lunch with him before us. When he finally helped us it was at least 1 - 1:15. Then he said we had to "check in" online (I had already done so & paid the fee) but we still had to inspect truck ourselves and electronically communicate any damage, fuel levels, mileage etc. Fuel level was 1/2 tank less than on the contract, mileage was 20 miles more. Our cell phones could not take required pictures to show the discrepancy so we could not move forward with confirming truck pickup. He told us to just approve the incorrect fuel level & mileage & deal with at drop-off. We did not want to do that & get charged for a 1/2 tank of fuel that we did not use. We were finally able to get the pictures fr my daughter's phone so that we could finish the check in/pickup process and take the truck. When we reached our destination & unloaded the truck we found a leak in the front corner of the truck where water had pooled from rain (it was dry upon pickup). Would never use this location again as this is not his primary business which is towing. That is why I wanted to pick up from a uhaul rental & storage center. After this experience will probably not use uhaul for any reason ever again. This is not the 1st time we have reserved fr uhaul & been left in lurch because equipment was not available when & where we scheduled it.

Truck was parked under a tree and the windshield was so dirty we could Bailey see out. No appliance dolly in the truck, we had to wait close to an hour for the â€œboss manâ€ to get there. When he did, he tried to charge me again for the time and stated â€œthis is a cluster fuckâ€. Finally giving me a dolly that was broken. Once we got on the road the AC in the truck didn't work.

Very good service during booking and pick-up. There was no person in the office at time of return, but I returned the trailer before scheduled time. Gentlemen in the yard received it and updated paper work later on.

Issac was fantastic to work with, our moving date changed several times and he was so kind to work with us about changing them. Thanks Issac!!!

Amazing service! Beyond helpful! Conveniently located and easy to deal with

The original location for my drop off, when I called the number given, no one spoke english. I speak enough spanish to realize there was no uhaul at this location. I looked the number up on line and called again as this location is the closest to where we were. I called the new number for the location and the same gentleman cursed me out in spanish and was very rude. I looked up another uhaul location that was further away in the next city and that gentleman said he had my information and I was to bring it there. I did not receive any notification about the change. He said the origional location doesnt fo uhaul anymore. I had to drive further. Totally unprofessional and frustrating. An event that should have very easy, turned out to be a cluster mess and caused me not to want to use uhaul again. Terrible experience!!!