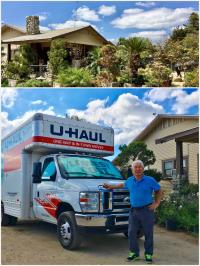 It's just not really made for UHaul.

The chino location on La Palma was a pain in the ass to work with? The policies that Uhaul has in place to rent equipment make it not so user friendly. However this chino location was awesome to work with. Sincerely, Daniel Sanchez

The manager was nice and polite.

Office was a mess and not really set up for a customer. The location was convenient.

My appointment was for 10:30 the owner was late got there after 11 when i picked up the truck. His manager did not speak English i waited a long time i had to call Uhaul reservation. To ask about my reservation and also the gasoline was under half a tank and when i returned the truck. They charged me $29 dls for gas maybe just needed 2 extra gallons to make it a half a tank and also. To drop it off. The owner was not there and his assistant speaks only korean and i had to wait in the rain with muddy ground sine that place is a nursery and to top it off tgey charged m e for 3 days i only had it for two days and Michael Park said its because its only for a ten hour period I was telling him no its for 24 hrs. Do not rent from Holt nursery

Either the hours listed on uhauls website for this pick up location was incorrect, or uhaul services were not ready at the time the website stated the business opened. I arrived at 9am which is the stated operation hours on uhauls website, i was told by an operative to come back at 10am when they "opened"

Late showing up. No wear to drop key after hours.

I rented a truck and dolly for 5 days and the dolly was almost the same price as the truck rental. I'll never rent from uhaul again

Set schedule for 9-1pm go there st 9 the uhaul person was not there so I had to wait till about 945am till he got there. Very rude not accommodating the fact that I was set back on schedule. Very disappointed won't be using uhaul again

This was a place that is hard to describe. The man running it was harvesting and cleaning persimmons in the front room of what appeared to be an old house. He could not interpret my reservation, telling me the location I intended to return the truck to didn't exist and he would set it up as â€œcustomer doesn't knowâ€. But, the location information was printed on the receipt I was given just as I set it up. This place appeared to be a farm of some type with piles of chopped wood as tall as a house, and just two trucks. Not a professional environment at all.

Regarding the pick up in California. The fuel gauge showed les than 3/4 of a tank upon receipt. The owner showed up roughly 30 minutes after the appointment and that delayed the packing of my truck making the day hotter. As the pick-up location was a landscape nursery in part, I had ants in the truck and killed 7 that I saw while driving. The truck worked well beyond the initial experience and the drop off location in Utah was excellent!

Reservation was made for a pick-up of a 10' truck and a appliance dolly at 8 AM on 8/11/18. Upon arrival, no equipment is ready, and the representative we are supposed to call for 24 hour assistance does not answer the phone. Fast forward, we are FINALLY able to get ahold of the representative who was supposed to have prepared our equipment for us, and are advised they will arrive at 9 AM the earliest. They show up at 9:30 AM, and our entire moving schedule is now delayed by an hour and a half.

This place is a fucking joke. The truck was a peice of shit. Sorry for my French but this was the worse I have EVER experienced!!!!!

Very disappointed the truck we rented had no ramp. I had to move a fridge and could do that because there was no ramp.

Horrible service, the people were extremely rude and when we turned in the truck we didn't get a final receipt. He staff didn't check the truck and just shooed us away and told us a worker out side would take the key that we could just leave.

The person in charge of renting the uhaul was late. The back had been opened so there was water in the back of the truck. When we went to return the truck at our scheduled drop off time [9pm] they were close and there was nowhere to leave it. So i had to make a second trip back the next morning. Which resulted in extra mileage and extra gas needing to be put in the tank. And me having to miss 2 hours of work to bring it back.

When I arrived at 8:10 am there two guys working. One of them motioned me where to park in the mud. No one spoke English. The guy took a picture of the odometer and gas gauge. I asked for a receipt and he shook his head no and motioned me to leave. I later-received an Email with a retuurn at 11:53 am and $40 additional fee.

No one was there to check in. The only person there could not speak English and yelled. Dirt parking lot. Not helpful at all. Horrible experience.

Truck was very dirty, and ran very poorly. There is an exhaust leak that could make a driver very sick if in traffic with windows rolled up. THIS TRUCK WAS HORRIBLE.