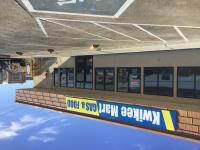 Customer Service was having a lot of trouble with the UHaul interface and their computers/devices. He told me to do as much as possible on my own phone. That definitely helped a lot. No information was provided on how to access the wifi network. Is this designed to be accessible to your customers or not? If no, then hide the logo/network. If yes, then I searched and was able to find no info on how to log on.

Truck was 2 hours late Could not access check out system. Took very long to check out

The person who helped me, Monica, was super helpful. She noticed the truck wasn't completely cleaned in the drivers seat, so she took it upon herself to clean the truck. I really appreciated that. However, there were a number to technological issues with the sign-in and sign-out process that could be improved. It took Monica quite some time to connect to our order in the morning. She told us the internet connection was slow. Upon return, again the internet connection was slow and Monica was faced with having to figure out how to enter tenths of a mile when the odometer doesn't record them. All of these issues slowed the process. And this is the second time in two months that I've had to travel extra miles to the outskirts of town get to the truck I needed only to see the same truck in another lot closer to my destination. It would be great if U-Haul could move trucks closer to where they are needed so I don't have to pay for the additional mileage to transport your truck at no benefit to me.

The whole proces was sÃºper slow ??

Every one at that location was very helpful in assisting me in the final process 4 people! And they even got my car off the tow ball. With the bumpy roads my car's Front wheels had turned so they had to maneuver them to get off the ramp. Excellent customer service from everyone!!

Everything about this experience has been so bad! I made the reservation two months ago so there would not be an issue. Sure enough the night before you guys called me to tell me that I could not take the auto transport because it would not be ready until the day after I needed to leave. Luckily you guys found something for me. Once that transport â€œwas readyâ€ I had to come to the location two times and it was not there after the person over the phone told me it would be ready. When they were finally ready for me to pick up the trailer. The clearly were helping another customer and they were having severe technical issues. I had to wait like 40 minutes or so. Lastly, the clear that was getting my car onto the transport, the clearly told me a couple times that he was not even certified for â€œdoing thisâ€ he kept asking me if it looked right. (How would I know that?) thank god I had the clear mind through this horrendous day of renting a truck and auto transport. I took the trailer and truck to another U-Haul dealer to make sure everything was done right and sure enough as you would naturally assume. My car was not tied down properly. I am not happy AT ALL about this experience.

The uhaul was fine. The employees at this location did not seem trained in how to do their job. I had a different person picking up and dropping off. They both appeared to be under the influence of drugs and unsure or incapable of doing their job. Not a good look for uhaul. I will rent from the uhaul store in the future.

The agent was very helpful in returning the truck, even though the tablet computer had malfunctioned. She found a way to complete the check-in process.

I had to call the 1800 number to even get the key to the uhaul cause the location had no record of me in the system and upon entering the vehicle the gas tank was completely empty, which i was then charged 47 dollars for not filling the tank up when i returned it. Awful experience, will not be using these services in the future.

The lady was extremely nice.... Everything else was downhill from there. Apparently someone syphoned all the gas from the Uhaul trucks the night before we arrived for the pick-up. We had to put gas in the truck as soon as we rented it... Only to find that it had a flat on one of the rest wheels. We were given a 26' as a replacement. The lady gauged the tank In correctly, causing me problems at drop off. I have never had a negative experience with Uhaul, until now.

They didnt have my reservation said couldnt find me tried charging me almost 3x the amount had to call uhaul multiple times!!!!! While there!!! truck was fithly dirty had garbge and fast food wraps etc win i went to leave after a horrible experience to get it i had to take a dirty truck and smelled horrible then i start it it was out of gas said o3 miles to empty paper says it got 1/8 of a tank go back in tell them they say well it was a night drop i didnt check it in its 2 pm why didnt you check it ????? Call uhaul again tell them its dirty no gas told ill get 20 70 creidt ok whatever didnt now paper says i have to retun it with 1/4 tank wtf it took 10 gals 40$$$ t0 get it to the freaking empty mark a nother 20 to get above it so im supposed to pay 60 70 in gas wtf called again told bring receipts ok guy were you drop off is very rude wont take them says not his problem then tells me if i dont clean the truck hes going go charge me i got it freaking dirty i already empty 2 grocery bays of crap out of it no i did not vacum it out or all the animal hair out or dirt wasnt mine so now ive got to sweep outand clean a truck i did not dirty before he will take it with out charging me total bullshit!!!!!!!!! Im supposed to get a credit back for gas idk win thou its not anything back on my card yet so yes terrible terrible experience rented multiple times before never like this left upset picking it up and in tears dropping it off made my whole moving experience so bad !!!!!!!!+ would not have freaking cleaed the dam thing but i can not afford to be charged for it and fight it out so i cleaned a truck in 80 plus temp in parking lot

Easy drop off and friendly staff