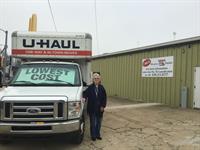 It is difficult to contact this location. I was billed for two days when I returned the trailer on time (1 day rental). I have yet to have the phone answered when I call to request a refund.

I would recommend because it was a lot closer to our final destination. But I wear informed that the closes site was Lawrence Kansas. When I attempted to change the location I was told I would be charged to change locations. I am also showing two charges on my credit card one from pickup and the other from drop off.. I am disputing. These charges because they both can't be right. I look forward to speaking to someone to resolve the obvious problem.

I was told to meet them at the office at 0800 to pick the truck up. They were not there, didn't answer their phone and finally showed up two hours later. They entered the incorrect starting mileage and charged me for extra miles that I did not use. Thankfully, I took a picture of the correct starting mileage. As of now, I'm still waiting for this to be credited back to my card. I was told that they don't store credit card info but that's not true. The local person just doesn't have access to it but the card info is definitely stored. I went to the office to discuss these issues and the person at the office was angry and told me I was a smartass. These people definitely need to be trained on how to run a business.

Owner went above and beyond assisting with towing hook-up. Thank you to Barbara!

I returned the trailer the same day I used it and put it back in the exact location I got it from and 2 days later received a calling asking me when I was going to return it and I told her I already had and she said they didn't have it and I asked her to look again and she called me back and said they didn't have it and I said they needed to check there cameras because I returned it the same day between 4:30 and 5 so I must have been stolen. Let me know ASAP. Never heard back and now my card has been charged for 2 days and still no word.

Needed better tires. The location itself is really good.

Slow pick up. Waited for an hour to repeat the same exact information that had already made a trip In person to save us time. It was terrible. Will never used uhaul again. The quote was nice. Final cost was triple the price. Not pleased at all with u hail. Bad service , In correct misleading quote. Not shoot with uhaul.

Took far too long to pick up equipment. I did the online check-in, yet still spent almost an hour each time I went to pick up one of the items. The operator was friendly and tried but seemed to not be able to keep info straight and get it entered into your system correctly. Whether it was incompetence on her part or the system not being user friendly enough, I don't know. It added another level of frustration to my move and cost time I didn't have to waste.

Nothing. The local dealer was great to work with and helped out in every way they could.

Our service went fine. I would recommend.

Mrs B was overwhelmed. The wrong number was on my ticket. I was called and had to return. I was sure at the place for over an hour maybe 2. Seemed out of line for a small town rental location. Roy. Would suggest getting more experiences for the Chanute KS location.

Charged with fuel upon return of equipment, even though fuel level was returned to the amount it was upon receiving equipment.

I've rented U-Haul from several locations in several cities moving my kids from here to there and back again, and found Ms B's to be above average. Easy access to the lot, and Ms B is very friendly and professional. She is still 'learning the ropes', but does a great job nonetheless.

The drop off took longer than I expected. But they were busy. Also this location didn't show up as a destination from the source. I don't know if that is a back end issue?

Get rid of the supervisor he is inappropriate and unprofessional. Staff needs reading on how to use computer.

The biggest concern i have is that the local location did not have the size of truck I requested. I know it is not their fault but it would be much more efficient if they did. My biggest gripe is that the person who had the truck I did rent did not return it on time. I had to wait quite a while before they brought it back even though we call them 3 times. The person renting out the truck did all they could to help but her hands were tied.

Have a grace period when a new representative takes over a location before they can rent equipment to learn the system. Have guidelines and SOP's that each rental location must be manned continuously from open to close, mandatory reliable high speed internet, and a firm understanding of computer technology. A person that cannot do the above things should not be able to be a representative for your company.

Don't call your paying customers 10 times to ask if they are done when they still have 5 hours left....also don't try to overcharge them just because your office person can't count or do there job correctly.

Thank You to Rick and Barbara for carrying on the U-Haul center in Chanute,Kansas. This service is much needed by me and many others in the community. Awesome job on day one!