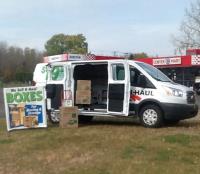 Nothing! The location was GREAT and had the truck running when I got there to heat it up and melt the snow on it. Above and beyond! Great!

The attendant was extremely kind and helpful. It was everything I could have asked for. Thanks!

Nothing the gentleman was nice about helping on unhook the trailer for us.

Very nice, very helpful and took care of us quickly and efficiently.

You need to change the number you send out on self-checkout for the lockbox. I ended up having to go inside to get the right number. ( you say 1002 and it is 1001) . Folks at the location apologized several times, said the have requested change a number of times and you still send out wrong combo.

Make sure mileage is accurate

There was no one available to assist in unhooking the trailer. A Minnesota citizen walking by offered help to this 61 year old in lifting the manual jack off the truck.

I deserve a refund for my â€œextra dayâ€ I have a signed contract stating it was due back tomorrow October 3rd and I dropped it off on Thursday the 1st AND they charged me an extra day.

I asked to pick up my truck near Saint Paul, due to a communication issue with the Maplewood. MN office. I had to drive to Centerville and I was told if I did not agree everything would be canceled. So 0 score

FYI - have rented from U-Haul (26' Truck) from this specific location 3 different times & have always had good service. This last time used a 26' Truck w/ 168,500 miles & the truck performed well but shook significantly. When returning truck experienced oil light indicator coming on - stopped & check oil level. Dip stick was completely dry - purchase 2 quarts of oil & put 1 quart in engine which resulted in oil light going off. When returning truck reported such, and Centermart/U-Haul promptly reimbursed for oil purchased. Again, great customer service, but would recommend checking this truck to see if there is a oil leak and/or does the truck need to be serviced (especially considering the mileage on this truck). Again, would recommend this location to all for their great customer service, location, and long time availability rental (typically 24 hours) - this was not the case when trying to rent from a regular U-Haul rental center in Blaine, MN on Hwy 65 (not the best in customer service thus the reason we cancelled a previous scheduled truck rental from this Blaine, MN U-Haul center). Stay safe & healthy. Thanks

There was a mix up in my pick up location and in the charge that had to be fixed. The location did a great job to get everything fixed.

Everything was great and a reasonable price.

Assist with hook up.

We have a mandatory mask ruling in Minnesota, and the little man who waited on me had his mask down over his chin instead of covering his mouth and nose. Not good!

We ordered a dolly and they didn't have one when we picked up the 26' truck. We had planned on having one and it would have been helpful. However, they did credit our bill for it. Everything else was great.

Nice people but they initially said not their job to help hook trailer up as the trailer tongue was sitting in the grass. I told them it would be hard to lift trailer and back it up at same time. They did not have a cord set up for lighting. All got fixed

Nothing they took care of me very good . The clerk was very nice and new what he was doing as he helped me out

Be more specific about the length of the deck. We rented a 15' truck because we knew that we were going to need something to fit that was 12 feet long and it ended up getting ruined because the deck was 12 feet but it caught on the door. When I called to talk about the issue the representative was not helpful. I felt we should have gotten a discount or refund of some kind because we rented a 15 foot truck and inside the truck the sticker said 14 foot truck. I'm not happy and probably will use a different company next time.

vehicle had a check engine light on and the seal on the gas tank was loose- I wasn't told about it, so drove off and had to return to confirm there wasn't really anything wrong with the truck. Was told it was routine maintenance due on truck. Since the vehicle had over 91k miles on it, wasn't sure how overdue vehicle was for service. Felt uneasy about a potential problem, but didn't have any issues. Service from rep was great- He was easy to get a hold of with questions.

The young girl at the counter couldn't have been more rude. I walked in asking to reserve a trailer, and she said they don't have any available. I said there were two trailers outside, and the uhaul website said it was available. She then told me they couldn't help me with a reservation, so i literally stood at the counter and did the reservation on my phone. I then went out to grab the trailer, only to find it was blocked by ANOTHER trailer. I walked back in asking if I could take the one that was in front, and she said they couldn't do that. I asked her how I was supposed to get the trailer in the back, and she said I had to move the one in front. Thankfully there was a younger guy there who said he would help, and we literally lifted the car trailer up by hand to move it out of the way. Unbelievably poor customer service.