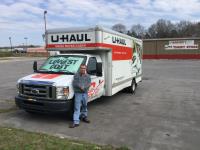 Picked up late due to rep not being ready.

Not the location, but the contract just to rent a tow dolly seems quite involved and complicated.

This location had 2 older men and one of them took my key. I received 2 calls and an email from recovery and upper uhaul management that my truck was stolen and those men said I never dropped it off. I am so finished with uhaul, will never rent from them again.

Truck was not clean also no gas in the truck

The only issue seemed to be with the Uhaul website. It was difficult to navigate.... instructions were awkward and difficult to follow. The local folks were awesome!

I was lied to and told my rental was a 1-day rental and when I got the text message found out it was only for 6 hours. Not sure what you consider a day but when I went to school in Texas a day was 24 hours. If you are renting a truck at $29.95 a day you should be able to keep it for a 24 HOUR DAY!!! This is very frustrating when you have to figure out how to return your rental 18 hours early.

Hand trucks, moving blankets. I assumed they were in the truck, but was never offered any of these.

I ordered and paid online. Suppose to pickup at 1;00pm. EVERYTHING WAS WRONG....THEY EVEN TRIED TO MAKE ME PAY AGAIN EVEN WHILE SHOWING MY PAID RESERVATION PRINT OUT. IT WAS AFTER 3;30PM BEFORE I FINALLY GOT IT STRAIGHT( vince). My time was critical Poor customer service even when i called the 800 number POOREST BUSINESS EXPERIENCE I VE HAD IN YEARS I COULD WRITE MUCH MORE....PATHETIC

Had to go to a second location 20 minutes away to drop off trailer. First location not helpful.

The 1st location was awful. The second was good. We did not get equipment when wanted. Had to drive a extra 17 miles out of our way to get it then back 17 miles. I truly think the online system is worthless. I will NEVER use y'all again. Anything would be better then the in organizations we went thought

Jeff got me in and out very efficiently. Very professional. Will use again.

I had ordered a set of blankets (12) but they were not available. The person providing the truck signed the invoice stating that no pads were given. Word of caution: If you need a 15 ft Truck you will need to order a 17 ft and so on. U-Haul measures their trucks different than Penske. The person (Jeff) signing the Truck out to me, was great.

The pull out ramp had mud on it. The back wasn't very clean and got mud on my mattress. The tank was 1/2 full (I was told this is the way I should turn it in). The cab smelled a bit like beer? Other than that, the truck ran well and was pretty good on gas.

No suggestions...did a great job checking us back in...friendly and efficient!

The truck did smell like smoke in the passenger area. The back was very clean.

The web site said it would be one price, turned out to be doubled almost. I see UHaul uses a bait and switch now. I will be trying budget or ryder in the future

There was a leak in the roof when we rented the truck. The associate never informed us of it verbally, but instead just wrote it down and that we took on all responsibility if it rained and there was water damage. It would be better customer service if you VERBALLY let your customer know if something was wrong with the truck and not just try to hide it by writing it on paper.

When I reserved this truck, I picked Atlantic Highlands. When they called to confirm, Uhaul said that I would have to pick up a truck 35 miles away because there was no truck close to my location. On my way to pick up, I stopped by the original location (5 miles from me) and the gentleman had a truck to rent. He changed my reservation back to the original pick-up location. He also stated that he has had people come as far as Manhattan and Staten Island (40-50 miles.) I don't think Uhaul has a clue where they have trucks! This was very stressful during a difficult move and the only saving grace was that we decided to stop at the original place to take a chance they had a truck available. Uhaul needs improvement on where their trucks are located

(1/6) When I picked up the UHaul trailer, the person who gave it to me asked: "Do you know how to use the trailer? How to hitch it up because I have no idea how (2/6) to do it?!" Fortunatley, I did know how to hitch it up but I began to think what would happen if another client didn't have any idea? What would they do? (3/6) Well, when I took the trailer, the person there told me that when I retrn te trailer to just leave it there. That it didn't matter if no one was there be (4/6) cause he believed I was going to bring the trailer back really late. I tld him that I was only going to use it a couple of hours. I returned the trailer t (5/6) he same day at 2pm. Until now, I have been calling that person to see if I can get my receipt that the trailer was in good condition but I haven't gotten (6/6) any answer. Fortunately, I took pictures of the trailer after leaving itto show that it was left in good condition. My e-mail is jacob.jc@hotmail.com.

Was getting msgs from uhaul about over dues but when I called Bluesky to tell them I was keeping it for another day I couldn't get ahold of the guy in charge of the rental ,frustrating other than that lack of communication everything was good will rent again

THE LOCATION WAS OK BUT UHAUL RESERVED THE SAME TRUCK TO 2 DIFFERENT PEOPLE AND WHEN WE TOOK THE TRUCK IT WAS A DIFFERENT ONE THE WE WERE SUPPOSE TO GET THE LOCATION HAD TO WRITE ALL THE CHANGES DOWN THE NUMBERS DIDN'T MATCH AT ALL. U HAUL WAS NOT VERY HELPFUL , WHEN THEY CALL WHERE TO PICK UP THEY ONLY GAVE ME HWY 36 ATLANTIC HIGHLANDS NEVER TOLD ME THAT IT WASN'T A UHAUL PLACE OR THE NAME OF IT AND NEVER GAVE ME NAME OR LOCATION OF DROP OFF I HAD TO LOOK EVERYTHING UP MYSELF. WILL NOT BE USING UHAUL AGAIN

Staff were very friendly and helpful. The facility is a rather old and not very well maintained gas station, hence the below average for the location. However, I felt the staff made up for the site issues.