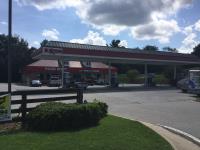 Have your equipment in good clean dependable transportation,and have your equipment at a facility that's staffed to serve people in need of moving equipment having to spend 2 hours total in the store waiting for a manager to come check the vehicle in on return was ridiculous to only get charged more than I was quoted even though I brought it back 3 hours early with more fuel than it had when I left and had a list of problems with the truck itself!! Absolutely disappointed Will never use U-Haul again

Transport crank to lift receiver was near impossible to crank.

Drop off was easy and fast

Facility was clean and easy to navigate. The lockbox for the key drop was easy to find. I didn't have to go inside or interact with any of the store employees.

Nothing, everything went well.

Train the people in the store to know what they are doing would be a nice start. The female working at the time was extremely rude. I would not ever use this location based on the customer service experience we had. Or maybe I should say lack of customer service. Really really bad experience.

The truck we rented had 164000 miles on it and the front suspension was in very bad shape. The ride was very bumpy even when the truck was not loaded.

The Uhaul rep was juggling many responsibilities but did a great job.

No improvements necessary. Great experience, easy pick up and drop off and vehicle was very clean.

Super easy to pick up and drop off! Great costumer service that was quick!

Great experience with the truck and the people!

The truck had damage and leaked water awful. It soaked like 15 of our boxes which one was pictures and ruined half of them. Also we were supposed to have received a 20 mike credit because the dealer near us didn't have a truck and this wasn't given a check out either. I expect a phone call from uhaul and for this to be rectified.

two things. we rented a 17 ft truck a week out only to get to the location and be told they did not have our reservation or a 17' truck. ridiculous. also, this is a convience store, so the clerk has to stop everytime a customer for the store comes in, to take care of them before finishing with you. makes the transaction take much longer.

I am very satisfied and they were very courteous.

Gas station is staffed with one attendant, who is responsible for everything. Uhaul customers take longer than a convenience store / gas purchase, and the small gas station can be surprisingly busy, so be prepared to take 45-60 minutes before the employee is able to complete the uHaul rental process, especially on a weekend. Rental was also a little frustrating due to previous customer not returning the truck we had reserved, so we had to get a smaller truck and take more trips, resulting in double the mileage we had planned, costing us almost double what we had planned. Overall, nice enough people, just not a convenient experience.

The Gal Checking me out was not very nice... made me wait 15 min plus while many customers went in front of me.

They too busy to take time to help hook up truck to trailer, waited one half to one hour to get truck

No real improvements. Location is part of a gas station. Trailer loading was difficult due to the slope the trailer was on up against the curve. They need stop blocks behind the trailer to keep the back in from resting on the curb so the trailer can be tilted on to the tongue of the truck.

I was charged $5 for a dolly I did not use and another $5 for furniture pads that were not in the truck because I didn't need them. I would have declined them since I was only moving stuff in storage bins and boxes.

Provide a cargo trailer with a jack on the front. Rediculous. I own multiple trailers and I'm not some skinny housewife.

Uhaul should actually have the truck you reserve at the location you reserve it at when the system says they will. Didn't bother telling me you changed the location probably do this to just to add more billable mileage. Same thing everytime we rent from Uhaul. Had to 45 minutes to pick it up. Then when returning 30 minutes and they gave up finally received email two days later

Michael was great, but they were short staffed when we returned the vehicle. I was unable to discuss the final bill and did not get any paperwork as they asked for my receipt when I brought it back. So I had no receipt except what was mailed to me. I do have questions regarding the bill but do not know who I should ask at this point. I have used other U-haul location and this was by far the best experience we have ever had with all of them even the U-Haul stores. The vehicle was very nice and not worn out.

This location did not meet any expectations I had. The 1 person who could handle our reservation was late to arrive and we had to wait on her. She was not efficient with the computer and had to call someone twice to complete our order. After signing the paperwork, she did not show us to the trailer nor did a walk around. We had to ask her where the trailer was located. We will never use this location nor recommend it.