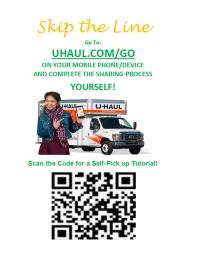 Install a sign so that the location is clearly marked.

45 minutes to pick up after online checkin. Second occasion at thi location with similar results. Both times employee was late to work. After first time being 45 minutes late I made the reservation one hour later and still employee was 30 minutes late. Absolutely unacceptable!

I find it appalling how I was treated at Elisas Variety Store where my original reservation was. They did not reserve my truck, told me that it's not their problem and to get out of their store, and best of all called me an ass hole for asking what am I supposed to do I am moving today and being a little upset with her reaction. Uhaul should definitely reconsider this location... And honestly having to drive 30 miles each way to get the truck at another location should have also resulted in a discount vs added miles and day. I am very disappointed with this experience. As for the ace hardware I was able to get a truck from... They were great, uhaul should make sure all their locations have customer service like this one... Elisas Variety Store is giving uhaul a bad name and uhaul should pull their service from there.

I made my rental reservations 2 weeks in advance. Three days before I was contacted by u-hall to change the location of my pick up over 30 miles from where I had previously reserved it. The day before my scheduled pick up I called to confirm my reservation and was re-assured everything was on track. We drove 3 hours to the location of pick up and was told there would be no one there to release us our u-hall for 2 more hours after our scheduled reservation. After waiting an hour someone finally showed up to release our rental to us. It took her an hour to process our information. She didn't know about any of the insurances or how to even operate the u-hall computer system. We attempted to contact the area supervisor Brandon MCDonald several times, even leaving voicemails that he never returned. We then contacted Monica Conley who said she would have it taken care of. A u-hall representative contacted us within 20 minutes and took over the transaction. The customer service and competence of the u-hall employee at the California city location was absolutely terrible. We were not compensated in anyway for our experience and time delays in picking up a truck. I would not recommend u-hall to anyone and would encourage others to seek out another company to help them with their moving needs.

You are doing everything right.

Available equipment was very scarce reportedly due to it being the end of the month and very one moving. The most frustrating thing about this most recent experience is when using the website to make a reservation is being made to believe that equipment was available at certain locations until getting an email that there is nothing available at that site. I had to drive close to an hour away to find one of the only moving vans available and it was smaller than what I originally reserved. When I picked up the vehicle, it was very dirty. It was embarrassing to drive around in and was difficult to see properly out of the windshield. I ended up washing the truck myself but feel that UHaul should have a better process for ensuring the equipment is clean especially during COVID-19 with everyone being so adamant about cleanliness and sanitation. It was obvious no sanitation was performed before me picking up this truck. The staff was friendly and helpful. It was very inconvenient to have to drive that far to pick up a moving truck though especially when there are several rental locations close to me.

I had a terrible time trying to pick the UHaul up in the morning and the same hassle trying to turn the truck in. It was no fault of anyone at ACE Hardware. They are always great. We were on the phone with someone from UHaul trying to get help and I asked him if I could get some kind of discount for my troubles and he said no. I found that unfortunate and unprofessional. UHaul needs to give veterans a military discount. Both Budget and Penske have a military discount. Thank you.

Rented a furniture mover,they did not have at pick up, instead put a dolly in cargo trailer. Had no use for a dolly.was charged for something I didn't want and didn't use.

It was fast and easy they had you in and out...

They were very friendly made me what to work here.

The check engine light was on not sure why ? Also the after hour depot instructions a lil complicated ! Besides that great customer . Thank you

Just have storage rentals and everything will be good

Rude and didn't want to help at first. Very useless. Couldn't even find a pen. Dirty office and truck was dirty inside and out. I had to scrub the dirt and bugs off the window just to see. I have pics of the inside of the cab. It took 30+ minutes just to rent a truck. They tried to give me a truck with a 1/4 tank of gas in it knowing I wouldn't even make it to my destination 75 miles away. So disgusted with this place. I have rented from them before and never had an issue.

Customer service was great, truck full of fuel and clean

I love the self check out.

The problem here was the location was not open during the hours that were stated on the website. We had to keep the truck overnight. When we went to drop it off on Monday morning, they were not open as advertised. I ended up having to go back twice. The staff was helpful and waived the overage that was charged to me due to going over the miles. If the original 25 extra mile granted, had been applied, I would not have gone over in the first place. I was trying to be understanding of all of this due to the Safer at Home order... but when you are asking about my experience with my rental.... this was it. Thanks...

Hours posted are not the real hours. Were not ready to do business. Sent out the wrong piece of equipment in terms of the recorded inventory number, which caused problems when I dropped off.

The return location was incorrect on the ticket. One of the trailer lights also was out.

The workers were very helpful!!

Sean was the best! Very friendly and helpful!

Representative had nothing to do with my problems, and did what he could to help.