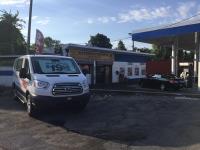 This is a mom/pop shop where I had to wait a half hour for the guy who manages the rentals to come to his shop and process my reservation. I reserved a dolly as well and they didnt have one. He made me go to another location to pick one up and when I arrived they did either have one. All in all this delayed my move significantly!

When I went to pickup the U-haul no one could help so they had to call someone. Then I had to wait 20 minutes until someone could rent me the U-haul. The parking lot was fill with trash and looked like a dump.

The location was not in a good area and did not feel very safe. We are 2 girls in our mid 20s - we were hesitant to leave my new car in the parking lot for the day, and felt scared to return our Uhaul in the dark (we did not return until 10:30pm). However, it ended up going well.

Ghetto, long wait even when precheck in was done. Fleet not maintained; i received a truck smelling of weed and liquor and low tire pressure.

4 stars because I got charged a cleaning fee ($20) for bird poop from roosting crows. I mean, it was a lot but it's not like I made the mess. What if it had hailed, would I get charged for damages?

I rent a uhaul 3-5x a year. This was one of the worst experiences I have had. The guy told me $100 deposit. When I gave him my card instead of cash he ran it for $56.25 and when I returned it he said he couldn't come look at the van since he was the only one running the store and for us not to worry. Then I called him several hours later since I didnt get a email receipt yet and he said he never got our keys from cashier. Then to no big suprise he charged me $20 cleaning fee. There was no way that would be a far charge as I know what uhaul expects. I thought it was a shady establishment and probably partially my fault for not listening to my gut when I walked in.

I was refused a receipt after returning the truck and did not get any proof that the van was returned. I was refused any proof that I replaced the gas that I used and returned the van with 3/4 tank of gas. I was refused proof of the return mileage on the rented van. I was told by the clerk at the counter inside of the gas station that I should take a photo of the mileage and gas with my phone for proof of mileage and that the gas was at 3/4 tank. I logged in just now and the site sent a pop up menu that says my original contract can not be located at this time. At this point I have not been given a refund to my bank account for the over-payment of mileage estimated at pickup and still have no proof that the van was returned un-damaged with 3/4 tank gas and no proof of the return mileage. The fender had a dent in it at pickup. I went back inside and reported the damage also showed the photo of the damage with my cellphone. The counter clerk said that he knows about the dent and that it was an old damage that occurred prior to my rental date. What I want is proof that the van was returned with 3/4 tank of gas; no damage and no further fees due and I want my refund for the mileage. The other concern I have is that the store was full of junkies and alcoholics. I got solicited by a crackhead at the side of the van while inspecting it for damage; the van was parked in a location next door to the gas station out of view for security reasons. Extremely poor location. I had no time left to make another rental location so I took the rental at risk of it all. Horrible rental experience.

The location was a trash-filled vacant lot next to a gas station. Despite the reservation I made two weeks in advance, my pick-up location and time were changed the day before my reservation. Though I was told I could use the website "24/7" to pick up my truck, when attempting to follow the instructions the site said I could not pick up my truck until two hours after I arrived. I waited on hold for ten minutes to resolve this "24/7" issue but finally had to ask the gas station attendants for help. The experience was faulty and unprofessional.

Why would you switch our location to a place with literally one truck and no supplies. Your judgement sucks and thus place was sketchy!

Truck was never inspected before I took off. Back had debris in it and was stranded for two hours due to tire flat and lost 600.00 job because I was late coming back

When the reservation was made it was expected that when the truck was to be picked up it would have been ready, it wasn't. The customer service was very poor, the agent was not readily available. The entire experience left a lot to be desired.

I fucking hate U-Haul charging me 300 for nothing

The location was less than satisfactory. When I arrived I went right inside of the location, and asked about the UHaul. They told me they did not do anything with UHaul. I went back outside, and downloaded the UHaul share app, and got myself all set online, believing that everything I needed to do was online. I finished the app registration, and instead of receiving a code to open a Uhaul lockbox I was told to go back inside. I then had to go into the store and ask repeatedly to finally get someone who know something about the keys. Then the person who was helping me was extremely reluctant to hand over the keys to the truck. It was frustrating.