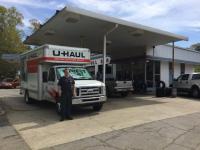 Customer service rep, helpful and informative, quick registration and hook up of trailer.

Nothing. Everything was great.

The lock box to drop off the keys is hidden. This is an automobile shop and there is a hole cut in the building that says "after hours key drop". It doesn't indicate that this is for Uhaul.

Made my reservation the day prior and picked up the trailer at the requested time. I was in and out of the office without unnecessary delays. I will rent here again.

No problems encountered, I was glad this pickup location was available so I did not have to drive all the way to a larger city to get the truck.

Everything was excellent, no problems at all. Have used before and will use again

This was the third auto transport at two different locations that I found unuseable. The first, the coupler was bent and broken. The second didn't have safety chains and the third the pig tail wire was broken. I was able to remove the pig tail from the transport that didn't have any chains.

Inventory needs to be properly verified and updated. I was supposed to pick up a vehicle transport from the Swifty Marathon in Bremen, GA. I made the reservation over the phone and once I got there after about 30 minutes the clerk was able to get my physical paperwork in order. I pay my money and go to the designated area to find that there isn't a vehicle transport out there. I bring this to the attention of the attendant and she tells me that it is out there. I ask her to come show it to me and she points to a 5x9 box trailer. I tell her that that particular trailer isn't for vehicle transport and she argues with me that it is. I ask for my money back (because I paid cash) and she tells me that I have to call 1-800-GO-UHAUL because they would need to process the refund. I call the number and speak to Malina Dukes. She informs me that according to the system it should be there and she calls the store to see what is going on. The clerk is telling her the same thing that she told me, that the transport was out there. Mrs. Dukes calls the area manager to inform him of what's going on and he tells her that he was at this very store the day before and specifically remembered NOT seeing the vehicle transport there (as I have now been telling the clerk for an hour) but assumed that it had been rented out. Mrs. Dukes, who was very professional and polite, found a vehicle transport for me but it was 20 minutes in the opposite direction of where I was traveling. The store was closed by this time but she told me that I could go and get it and she would process the rental using my card over the phone (the clerk had refunded my initial cash payment by now). She gave me a discount for the inconvenience and instructed me to return the vehicle transport to the location that I was originally scheduled to pick it up from once I was done. The next day I return the vehicle transport to Swifty Marathon as instructed and notify the clerk that was on duty. I also call Mrs. Dukes to inform her that it had been returned as well but was told that she was on vacation. I asked the associate to please ensure that it was noted on my account that the vehicle transport was returned due to the confusion on the day before. She said that she would make sure that everything was handled. Five days later I receive calls from both UHAUL and the store in Bowdon, GA where I picked up the transport. Both calls where to ask about the transport because it didn't show in the system that it had been returned. I had to call UHAUL again to get everything cleared up. Thankfully, no extra charges occurred to my card. This process was very frustrating and disappointing. Mrs. Malina Dukes was extremely helpful with resolving this process. She was the only silver lining to this horrible ordeal.

Nothing at all. I was treated with respect and courtesy. Thank you.

Everything was fantastic, easy to access and the staff at the location were extremely helpful. I will DEFINITELY be recommending them for anyone's moving needs.

Scott was very friendly and knowledgable. Would definitely use the Bowdon, GA location again! He helped us get hooked up and check out the lights. UHaul, this is a great dealer for you to have in your fleet.

You made it very easy during a hectic time. Thank you

The truck drove horrible. It was bumpy, the breaks were tight. The truck was dirty, with ropes and a telephone cord left in the back. I'm extremely unsatisfied!!!!

I received excellent service as your company was represented by a very polite, knowledgeable, clean cut, nice young man - it is hard to improve on that!

I found my experience at both locations to be excellent.

The service guy was very nice and helpful.. This is not the location that I requested to pick up from, so inconvenience #1 was having to drive 30mins out of my way to get the truck.. Inconvenience #2, when I say FULL, I mean FULL-- the uhaul was full of roaches!! So I had to spray it and sweep the dead bugs out before I could load my things; which put me behind even further in my move....

Have used Styles before. They are outstanding and provide great service. They are the type of people and service facility that give U Haul a good name. Vehicle and all additional equipment was ready and in outstanding condition. Was shown how to operate the trailer and they reviewed the truck and equipment.Outstanding Service! Thank You!!!!!!!!

use a cau hauler frequently most times cannot find one close by. Keep a car hauler at this location